Last year Jim Budd wrote about having visited the Vouvray vineyards and being shown Wild Tulip Tulipa sylvestris (Fr. Tulipe des bois). Until then I had no idea the species occurred here so I made a note in my diary to check them out this year. I asked our friends at Chateau Gaudrelle if they had any in their parcels and luckily they do. 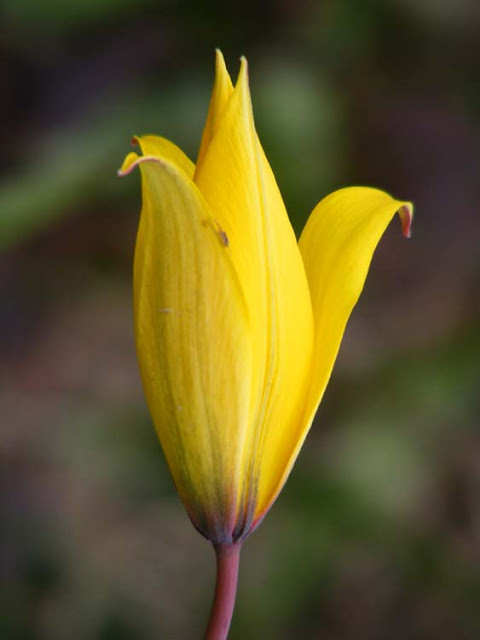 Armed with my map annotated with an 'x marks the spot' by Cyril, the cellar master, I set out on the Thursday  before Easter to see them. Aurore, the office manager, thought late March was a bit early for them and offered to send me an email when they'd been observed flowering, but Alexandre Monmousseau, the owner and winemaker, told me that he had seen the first flowers already. He also told me that once the predicted rain over Easter came through, the fragile tulip flowers would be toast. So, it was Thursday or never.


There is an abandoned tourist train just behind the tulip colony, for reasons that were not apparent. 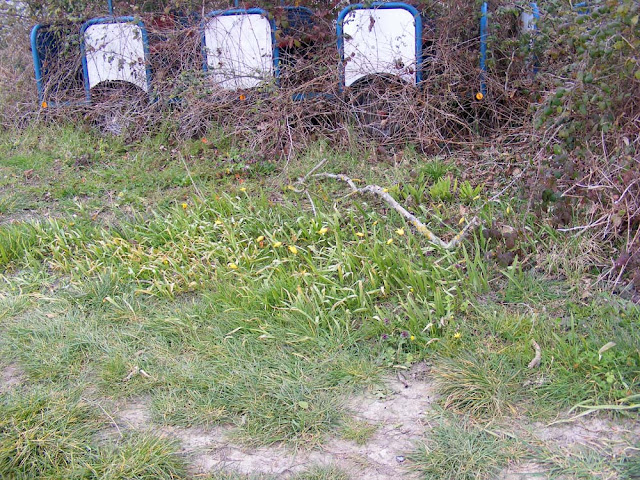 The tulips turned out to be extremely easy to find, under a walnut tree by a track near Chateau Gaudrelle, as described. They have a seductive charm despite the fact that only about 10% of the population ever flowers each year. The flowers are delicate and graceful, and it was clear that all the Chateau Gaudrelle staff loved them and were proud to be their guardians. Charles, the commercial services manager, commented that it made him mad when he saw daytrippers in the vineyards making off with fistfuls of wildflowers like these tulips.


Tulips, with the vineyard in the background. 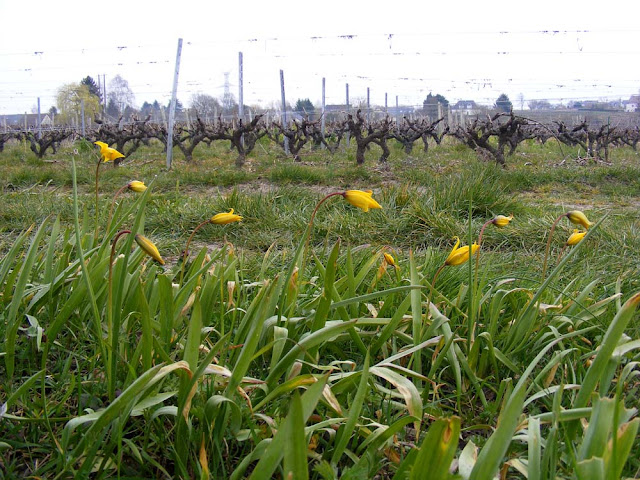 They used to be common along the Loire from Orleans to Nantes, but within a decade or two of widespread herbicide usage in the vineyards beginning in the 1970s, they had become very rare. Increased urbanisation in the 1960s also had an effect on the population in certain areas. Vineyards gained a reputation for being biodiversity wastelands, and the wine industry still accounts for 20% of agricultural pesticide use in France. Happily in the Touraine Loire Valley there are now a significant number of vineyards like Chateau Gaudrelle which are extremely careful about their pesticide use, applying products only when necessary and not by the calendar. They are also always looking for the most appropriate product for the job, and will spurn sprays altogether if something like pheromone capsules work just as well. Importantly they are no longer using copper based sprays to control fungal diseases.

It is unclear whether these tulips are native to the Loire Valley or whether they were introduced into gardens in the 16th century and are now a relict population of naturalised plants. My feeling is that the Loire is probably the northern limit of their natural range (like so many Mediterranean species). They can be found in Southern Europe and North Africa right through to Central Asia. They are also cultivated and bulbs are reasonably easy to obtain for the plantsman style gardener, although apparently you have to be a bit careful you are not sold a lookalike modern cultivar. 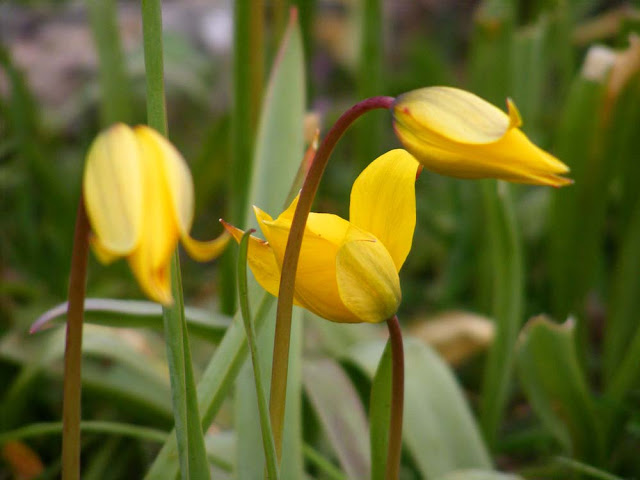 Despite their scientific name of sylvestris, they are not really a woodland plant. Where they are growing at Chateau Gaudrelle is very typical. They like dry chalky soil near isolated trees, and will also grow amongst the vines themselves. Colonies can be hundreds of plants, but most of them don't flower. The flowers themselves don't persist very long, and touching them or bad weather can make the petals drop. 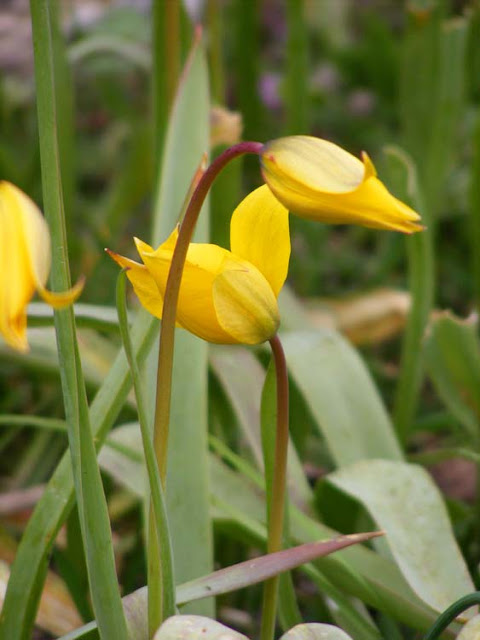 They are also apparently scented, but I didn't realise this when I was photographing them and although I got quite close to them, the scent must be quite delicate, because I didn't notice it. None of them were open, as it was a dull day and around 5pm in the evening.


The tulips stretch all the way along the track to the corner. 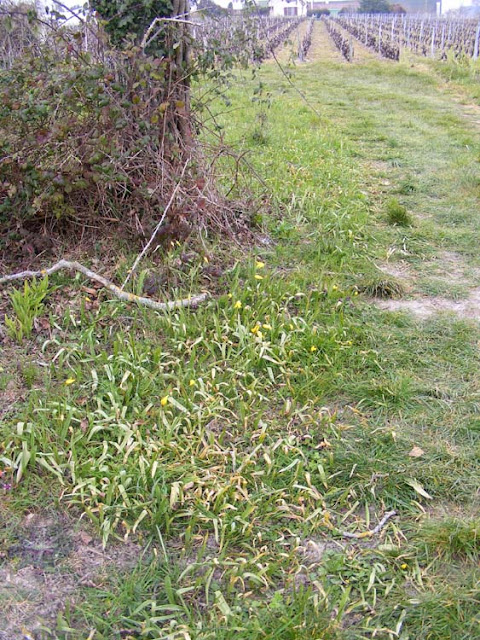 Seeing these flowers and reading about their decline in my lifetime made me reflect on how impoverished and banalised our environment has become in the 21st century. These plants have a brief and what would once have been a glorious flowering period. Now they are tucked in to tiny pockets where they are out of the reach of intensive farming. The loss of this particular species wasn't even slow and insidious as has been the case with so many plants and insects. In under two decades Wild Tulips went from abundant and ubiquitous in the vineyards to being declared endangered. It's really shocking and disturbing. Nowadays there is an awareness and a pride in these disappearing species, but it seems unlikely we will ever get back to the days of clouds of butterflies and carpets of wild flowers. One reason is that the soil is still widely regarded as nothing more than a cheap growing medium. The matrix between time, labour, products, yield and net income requires more and more attention from the farmer and they have few incentives other than the cost of products and personal beliefs to farm in anything but the most pragmatic and compromised way. Another reason is that very few people now remember what it used to be like, and younger people have no idea that the natural world could possibly be as fecund and beautiful as the records suggest. We have an idea of nature and healthy ecologies that is already grossly degraded and limited.


Chateau Gaudrelle, no longer owned by the Monmousseau family,
but they still own the surrounding chenin blanc vines. 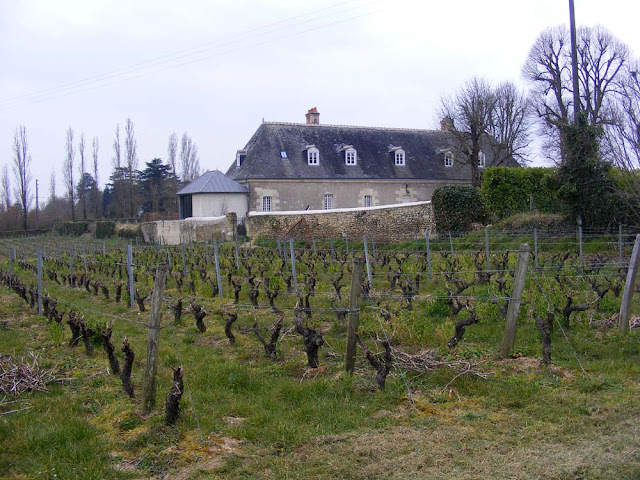 Why does this matter? It matters because soil all over the world is poisoned (in vineyards and many other places by copper and arsenic), losing fertility and/or disappearing. Everything we eat comes from or depends on the soil, and the health of our soil also impacts on how well we can manage the effects of extreme weather.

I was accompanied on my outing to see the tulips by Tim and Pauline of Aigronne Valley Wildlife. Their post about the tulips is here.

Many thanks to Chateau Gaudrelle for allowing me free access to their vine parcels and being so helpful when I expressed a wish to see the tulips. You can read more about what we've written about the Vouvray winery Chateau Gaudrelle here.

A la cuisine hier: Green Goddess Macaroni and Cheese, which was macaroni cheese with added chard. As you can see the steady supply of cheddar continues to be appreciated. Plus, I had half a litre of four day old raw milk that wasn't going to last it through the night to five days in consumable condition. Turning it into cheese sauce allowed me to feel righteous.

Dessert was the last of a rustic mirabelle tart (supermarket pastry, mirabelles from the freezer), with supermarket icecream.
Posted by Susan at 09:00

Email ThisBlogThis!Share to TwitterShare to FacebookShare to Pinterest
Labels: Food and Drink, nature and wildlife, Pictures of Chateaux

I made macaroni and cheese with some Dutch Mimolette the other day, but I was not really impressed. Too bland. Back to Comté for me. Your Green Goddess version sounds good. Thanks for the link.

Nice post, thanks for the trip and the mention...
Alistair Fitter includes it in his "Atlas of the WILD FLOWERS of Britain and Northern Europe" 1978...
so the data is well before that...
Fitter shows a line from Normandy across to Paris, in from the coast, as being the Northern limit...
in pockets above that it is shown as red indicating introduced / naturalised escapes.
So, given what you wrote above about the use of pesticides increasing in the '70s...
that Northen line will surely be far closer to here...
or even below.
As it was, the whole natural occurence shown was in light green, indicating sparse/isolated pockets of them.

And I agree with your rant!!

We shall have to start looking out for them as there used to be vines in our area (our house was surrounded bg a vineyard). Can you collect the seeds?

No, it's a protected species so you can't collect seed without Prefectural permission. If you find it the best thing is to protect its habitat (don't mow when the plant is above ground, don't drive over the site, don't use herbicides, don't let the site be taken over by invasive plants or scrub).