How the Heck is the Postman Supposed to Reach That?

Earlier in the year Carolyn Knowlman contacted me and asked me if I would like a couple of nest boxes for European Swift Apus apus. She is spearheading a campaign in Amboise to put up nest boxes on as many buildings as possible. I was absolutely delighted and said 'yes please!'


One of the nest boxes, showing the interior with its glued in ring to create a base for the nest. 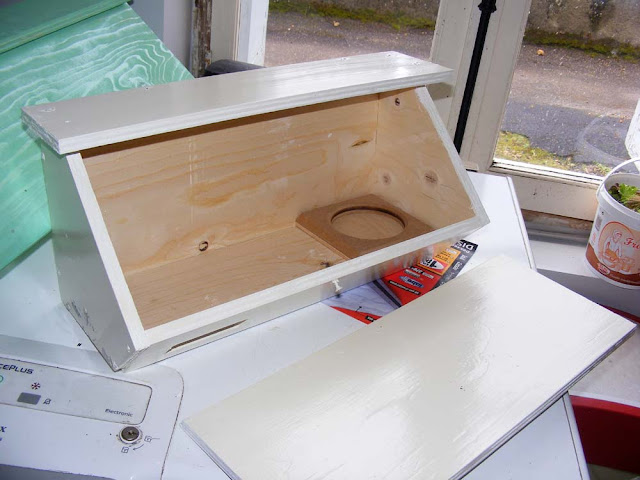 The next challenge was to find someone with a long enough ladder who could fix them to the back of our barn, just under the eaves. This is north facing and just to the left of the downpipe was deemed ideal for swifts by Carolyn. I emailed everyone I could think of who might have a ladder suitable for working at about 8 - 10 metres off the ground. Several French friends suggested I contact the fire brigade or a local roofer, but luckily Dennis got in touch to say he had a suitable ladder and could do it. On Tuesday he and wife Angela came over and the job was done. Longtime readers may remember Den and Ang as the lovely people who delurked as blog readers several years ago in order to offer to bring our bargain priced range hood over from England. 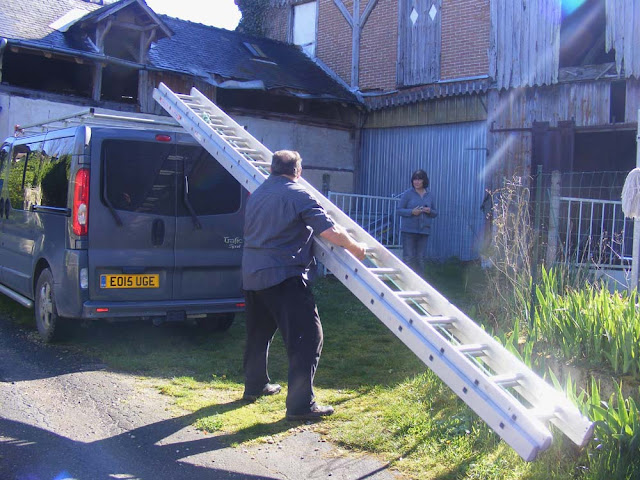 Carolyn has convinced the Amboise town hall to install nest boxes on various buildings, and her friends and acquaintances are all encouraged to do so too. Her best result so far has been some friends in Amboise who put up some boxes last year. They were occupied by swifts within three weeks of going up. Now the house has 28 nest boxes under the eaves, ready for this year's arrivals. 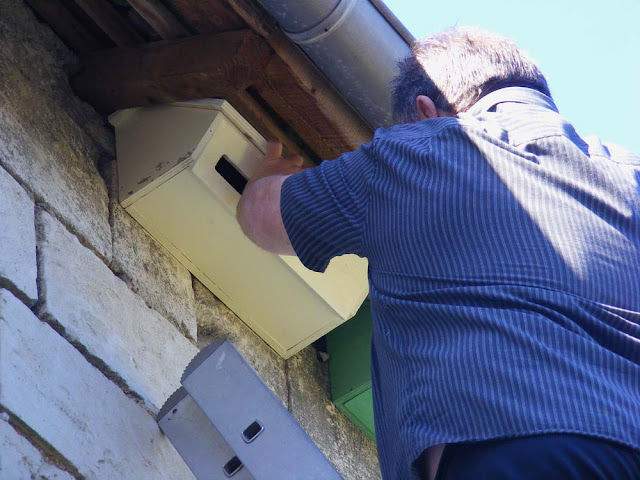 I picked the boxes up from Carolyn on the day I went up to Vouvray to look at the wild tulips. I showed them to Charles at Chateau Gaudrelle as he is busy renovating an old farmhouse in Esvres and has already instructed his roofers to be careful not to disturb the House Martin nests. He queried whether the nest boxes should be painted, worried that the paint might off-gas which would be bad for the birds, or they might just not like it. Carolyn reassured us that modern paint is much less noxious than in the past and the swift conservation groups now take the view that it is better to prolong the life of the nest boxes by painting them on the outside. They are not painted inside.


My two nest boxes installed on the back of the barn. They look rather like improbably high letter boxes. 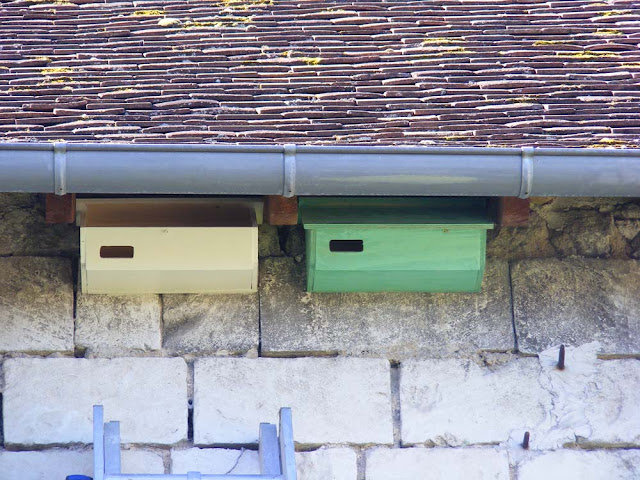 She also advised that someone like Charles, who is still renovating, should ideally go for swift nest bricks which are built into the wall or leaving gaps under the eaves so they can access the roof space. Swift bricks look like a concrete block with an entry hole and are just incorporated into the wall like an ordinary brick or block. If it is too late for a nest brick, the nest boxes like I have installed are a good alternative. They need to be placed as high as possible, with a clear flight path for approach, not on a south facing wall. Ideally a recording of swifts calling should be played as loudly and as often as possible from mid-May onwards to attract the swifts to your nest boxes. A hour long CD can be purchased for very little from Swift Conservation.


They fit very discreetly between the rafters under the eaves. 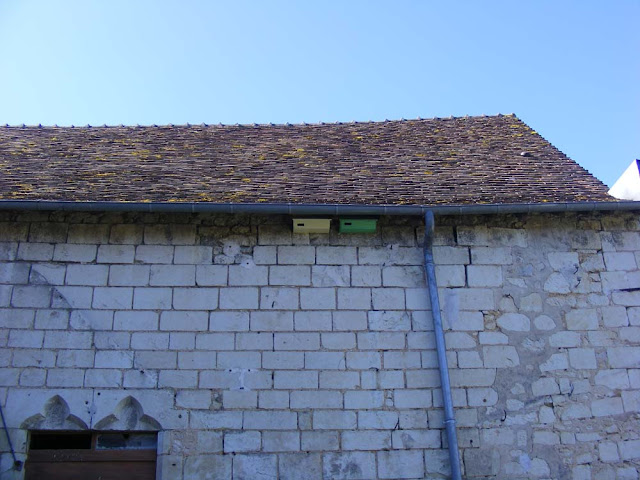 Nest boxes themselves are quite easy to make and there are lots of instructions available on the internet. This version is the one Carolyn recommends. The idea is that they are fixed to the wall through the back, but Dennis suggests that the back be extended beyond the sides so that they can be fixed without having to fiddle about in the limited space inside the box under the eaves. The opening faces downwards so that the less aerially adept sparrows are discouraged from taking possession of the boxes before the swifts even arrive.

The nest boxes are becoming essential for the swifts. Their breeding success is starting to be affected by the loss of nesting spaces in buildings as people renovate and block holes up.

Questions? I will be interviewing Laurence, one of our local bakers, on Tuesday, for a future blog post. If there is anything you would like me to ask her, let me know, either in the comments section below or by emailing me via my profile on the right hand side bar.

Post script....on the home page, all your sidebar items have dropped to below the posts... Both Safari...on this machine...and SmokeyRenard on the other...show the same thing.
On the comments page, all is normal on both machines.

I'm going to stick the Android phone in the laundry window and play Xenocanto recordings to them. Not as convenient as an hour long CD, but I don't have a portable CD player.

Re the home page looking weird, I assume it's something to do with your settings not ours. Mine looks fine.

They look great, we hope you attract the swifts. You could ask Laurence about Gluten free products and if there has been any demand!

Can't imagine standing on that tall ladder while fiddling with
a screw driver. It'll be interesting to see how long it takes for
the nesters to start building.
I'd be interested to know how long Laurence lets her dough ferment
and whether she does it under cool conditions. And does she ever
sleep! I believe you said she had children to care for too.

I'll ask her, and be very interested in the response. Did you see this article in the paper about a GF café in Blois? There is obviously a professional network of GF bakers developing.

I caught Laurence napping in the afternoon last week :-) I'll ask her about proving.

How do you clean out the boxes in the off-season, or do you? I thought that birdhouses got rather grungy inside after a time.

There is no need to clean out the nest boxes. After all, natural nest sites are not cleaned out. And insects that feed on organic debris will tidy them up in the swifts absence anyway.

Very smart!
I'm hoping our swifts/swallows return to their old nest in the well room. It's in full view of the dining room window so we can watch all their comings and goings from the comfirt of indoors.

I think your birds would be swallows. They nest inside buildings in mud cup nests. Swifts don't nest below about 4m and normally by accessing a tiny hole in the wall, under the eaves or under a tile. It is very likely your birds will return. Ours that nest in the garage and/or barn already have, but it is obvious that not all the swallows have returned yet.