The French Can Make Beer!

As a general rule French beer is fairly unimpressive stuff (sometimes even less impressive than Australian beer!) This situation is starting to change (in both countries) with micro-breweries popping up all over and producing some very drinkable brews. But nevertheless, in general, beer in France is dreadful industrial stuff.

Saturday was the Fête de la Saint-Georges in Preuilly-sur-Claise. We ran into our friend Gérard at the fair and he asked us if we were having lunch there. He urged us to do so as they were putting on carbonnade flamande (Flemish beef and beer stew), tarte au sucre (sugar tart) and a 'special beer'. So we stayed for lunch, joined by Antoinette and Niall.

The 'special beer' turned out to be 3 Monts. I've seen it in the supermarket but never bought it and never drunk it.

3 Monts Flemish beer made by the Brasserie de Saint Sylvestre. 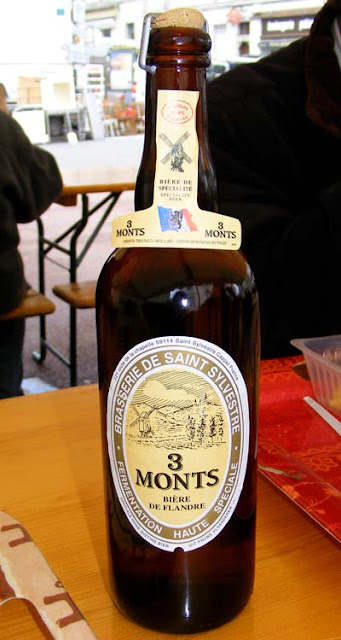 The first challenge was opening it. Simon and I had never seen a clip and cork arrangement quite like this but luckily Antoinette misspent part of her youth in the Low Countries and knew how to tackle it.

The beer was bright golden in colour, with an enormous head. It was a very enjoyable quaff and went perfectly with the beef stew. Later when I got home I looked the brewery up and it turned out to be a very interesting story.

3 Monts is a bière de garde ('keeping beer'). The term used in English for this type of beer is 'pale ale'. 3 Monts is a typical example of this type of beer, produced by the Brasserie de Saint-Sylvestre, a small family owned brewery in Nord-Pas de Calais, the French part of Flanders. The name 3 Monts refers to the three mountains, equidistant from the brewery. These three mountains were too steep for beer to be delivered by horsedrawn dray and the mountain villages had to wait until after the Second World War for regular supplies to be delivered by truck. 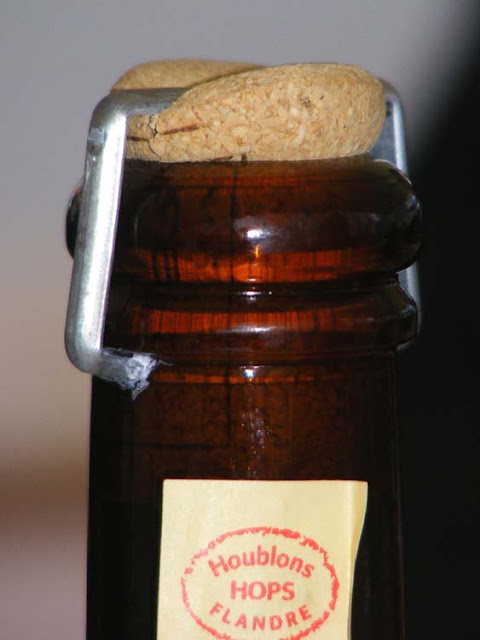 There has been a brewery in the town of Saint-Sylvestre Cappel since at least 1600. Generally speaking the brewery workers are locals born and bred, and the ingredients such as the hops and barley malt local too. The population is around 1100 and the town also has an ice-cream factory and apple orchards. The hillside site has natural springs yielding potable water and there are still two breweries located in the town, even after the decline in the trade in the 20th century. At the beginning of the 20th century there were 2000 breweries in French Flanders, but today only 30 remain.

In September 1939 the owner of the brewery, who was the grandfather of the current owners, was drafted into the army, along with five of his employees. His sixteen year old son stepped into his shoes and ran the brewery for the duration of the war along with the remaining eight employees. After the war the young man decided to formalise his training by going to 'brewing school' and it is largely due to his modernising of the brewery that it survives today. Since 1985 his two sons, also trained brewers, have run the brewery, and it is them who launched the 3 Monts beer. Its popularity has grown from Flanders, then France and now it is sold all over the world, including Europe, the USA, Canada and Australia.

For those of you interested in the nerdier aspects of beer tasting, here is the link to the reviews on Beer Advocate. Basically, everyone loves this beer.

There was an earthquake in the Charente yesterday. The epicentre was at Muron, which is 162km south-west of Preuilly sur Claise (and less importantly, 30km south-east of la Rochelle), and was 5.2 magnitude. It was the strongest earthquake in France in two years, but it appears that nothing was broken. There is more here (assuming the link still works!)

There is a bottle in the fridge.... It was to go with last night's Barnsley Chops... But we had salad and cheese instead....quicker....so will be drinking the Three Peaks tonight!

Have you tried La Goudale... Also Northen France....the French have always been able to brew beer, but lost a lot of the skills between the wars as wine drinking became fashionable...there is, however....as can be seen locally....a surge in independent micros brewing good ale! Between Sancerre, Tours, Le Blanc and just the other side of Potiers, there are now some twenty-four breweries....including two that can scarcely be called "micro" any longer. And almost all of it is Bio!!

This is very timely. We'll keep Three Monts in mind. Might need to phone you for instructions on how to open it, though.

I'm sure I have tried La Goudale, but I presumably didn't find it terribly memorable, because I can't remember it particularly.

It turns out to be fairly easy. I think you just push the metal clip off then twist the cork out like you would for sparkling wine or cider.

When we visited France with our college age daughter, Amy, we spent one evening tasting every beer available in Sarlat. Afterwards, she thought perhaps she should skip the rest of her studies in geology, spend the next two years with a brew master she knew, then move to France and open a brewery. "These people are in desperate need of a good beer!" She still only drinks the good stuff.

Whilst La Goudale is available in the shops, no bars or restaurants that I've been in have ever had it on their menu...I think they find it too pricey to make a profit on... As in "I'm not paying that much for a beer...I'll have the wine, Ta!"

Yup! But a screwdriver makes removing that clip easier!

Antoinette managed it with the handle of a plastic fork and it didn't break. Impressive, huh!?

Sarlat may not have been the best choice of locations for sampling beer in France. She might have fared better in Lille.

NB...Never ever open an unchilled bottle.... I took out a fluorescent light tube and one end of the fitting with a Trois Monts cork and clip!! The meal underneath was covered in glass and beer foam... I went down the chippy!

In the immediate vicinity of Sancerre, there were 63 breweries before the Great War....dwindling to 20 before WW2....and zero by 1976....and stayed like that until the Brasserie Sanceroise opened in 1995... In the former Sancerre brewhouse.

No, no more ads. We've removed them.