In the Orchard on Sunday

Saint Mark's Flies Bibio marci mating on the Chasselas grape. The grape leaves are just bursting out of their tight little buds. I'll be able to make dolmades in a couple of weeks! Hurrah! 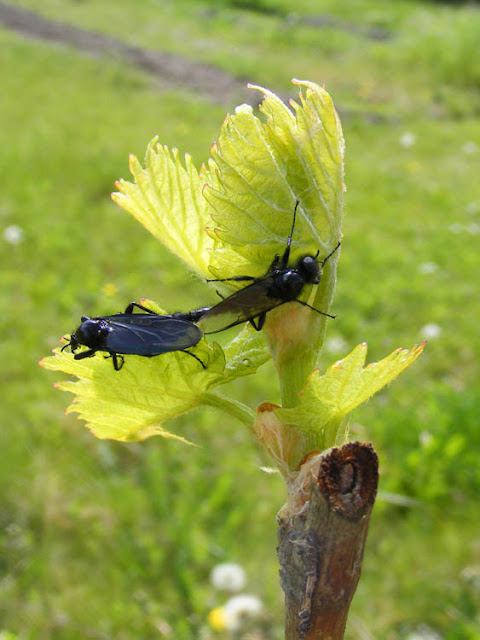 I nearly stepped on this Western Whip Snake Hierophis viridiflavus, snoozing in the sun. It didn't notice me for several minutes. I could see it breathing. When it realised I was there it glided off under the 'to be burnt' pile. It was about a metre long. 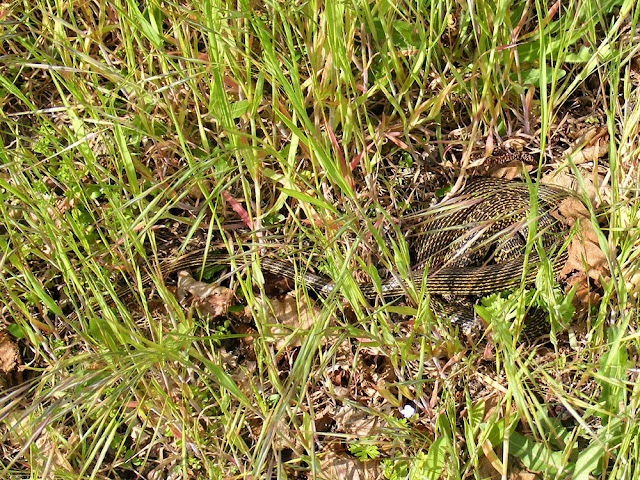 A closeup of the scales, showing the yellow patterning. Every Western Whip Snake seems to have a different pattern and they vary considerably in design and colouring. This one is a particularly stripey one. 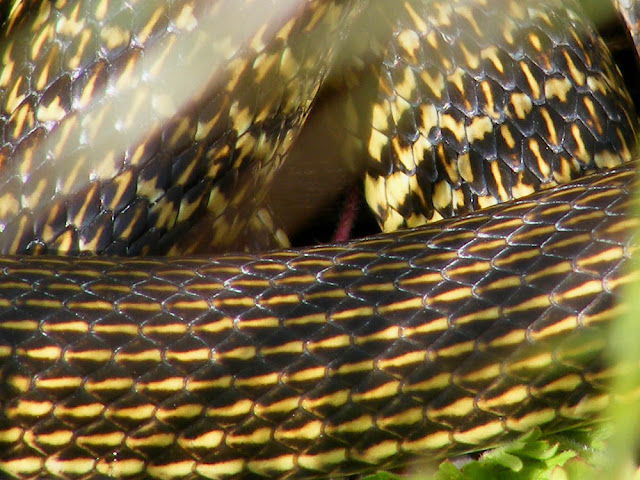 Quite a few of the Early Spider Orchids Ophrys sphegodes are out. The flowers can vary quite a bit in the form and patterning of their labellums (bottom petal).Click on the link to Loire Valley Nature if you are interested in comparing a number of individual plants. 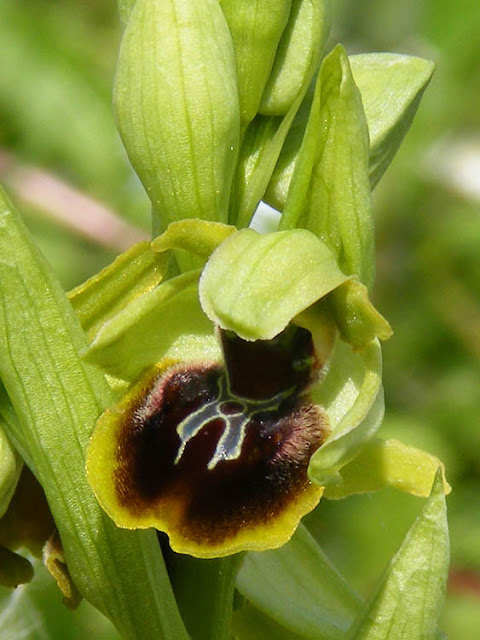 Apple blossom is the most beautiful of the fruit tree flowers I think. Plus it is most pleasantly scented. Some of our apples don't have much blossom, but others are covered. Like many fruit trees they tend to naturally alternate a heavy crop with a light one. Because we have 8 trees and 6 different varieties we always get something. This one is Granny Smith. 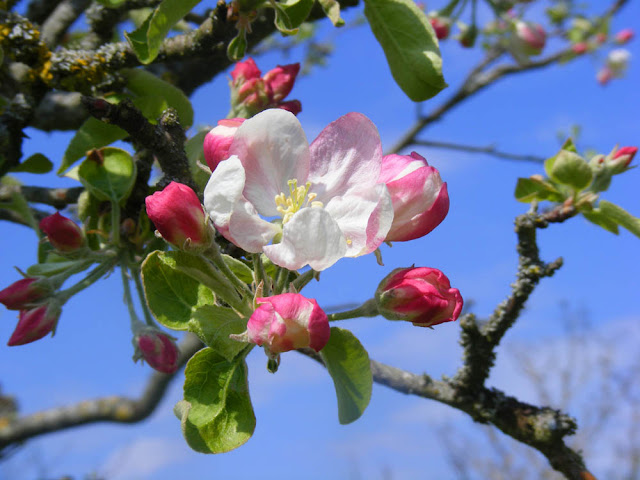 The chafer beetle Tropinota sp feeding on dandelion pollen. There were lots of these on Sunday (although I didn't check every one to see which species I had...) 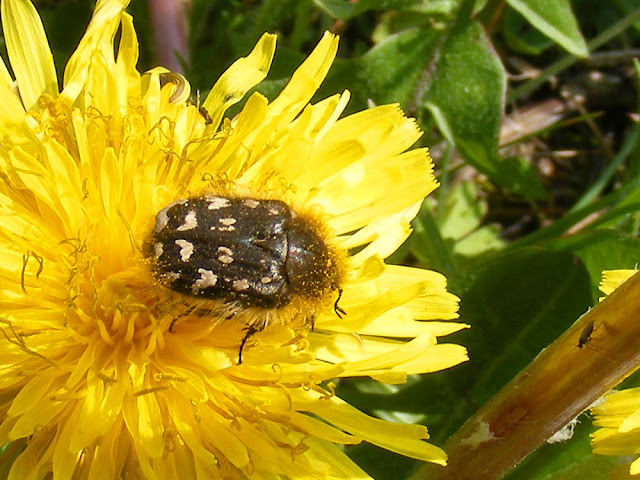 Cheating here -- this morel was photographed 10 days ago. Several appeared in the potager this year, but they don't come every year. This is typical of morels. As a French friend says, they are infidèle. 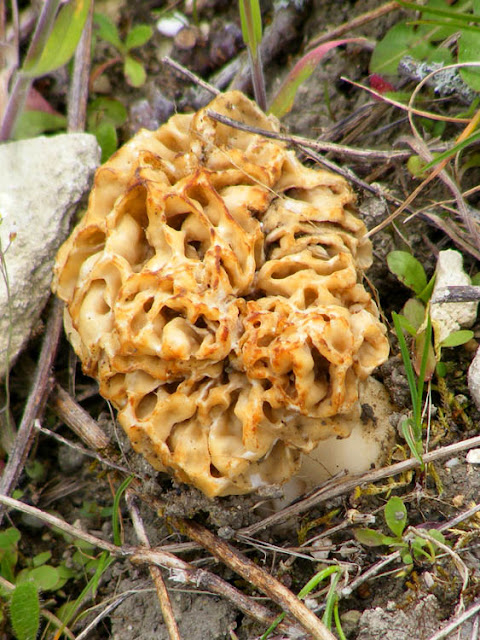 Your dolmades are delicious...

An interesting trip around your orchard. I have a fear of snakes so wouldn't even have been able to photograph it. This fear was made worse by when the 'animal man' visited our school. I expained to him that whereas I would touch/hold most of the animals I wouldn't want to transmit my fear of snakes to the pupils so please not to ask me to do anything with the snake.

Needless to say he completely ignored this. I managed but was absolutely struck with fear, although I don't think the kids noticed.

I haven't booked him since...

Your Morel looks like it could be Morchella esculenta... the best of all... I'd get your fungal buddies to identify them next time... you could have your own fungifest.

I'm a great believer in eating only fungi that are easily identifiable...
like this one.

All the morels are edible but...
Gyromitra esculenta...
the False Morel is deadly raw...
and beleived to be poisonous, accumulatively, after cooking!

But they grow on sandy soil with conifers [pines being the most common]... and look more like a raw brain... they are convoluted, but NOT divided into pockets as per. the Morels.


Love the apple blossom pictures that are appearing at the moment...
yours included....
we've got a variety here, Katy, that has crimson flowers as they come from bud, not pink...
quite startling...
I'll try and get a pic myself...
if this bleedin' rain ever stops...
10mm so far today!!

I love the apple blossom as well. It's just delicious. My tree is covered this year. And dolmades... I hope I manage to make some myself!

Gaynor: snakes do polarise people. I've never been frightened of them, although I give the poisonous ones a healthy respect and distance.

Tim: I think it is M. esculenta. I only discovered them too late to pick and eat (there were 3). Last time they appeared I had 2 in an omelette.

LJ: if you don't make dolmades you'll really be missing out!

hopefully it'll be banned everywhere within a few years, even if I'm not holding my breath.

beautiful snake. what a special thing to get to see one.

Pearl: the banning of neonics isn't likely to do much good. None of the studies showing they are dangerous are much good in that the methodology and analyses are fairly easy to pick holes in. They are certainly not the main driver of bee deaths. That is almost certainly varroa mite, with other diseases, parasites and habitat issues pushing it. Pesticides are way down the list and not what we should be focusing on.

For the manufacturers of neonics the ban is also irrelevant, as these chemicals will soon be out of patent, so anyone will be able to manufacture them. Syngenta (and presumably Bayer) have already moved on to the next product to be released, ensuring their exclusive rights and the profits associated with that continue.