Australian beer when we left the country for England in 1997 was dreadful stuff -- over carbonated mass produced lager that was served ice cold so you didn't notice it didn't taste of anything. People have been telling me ever since that the beer has improved, with a proliferation of micro or artisan breweries making styles other than lager. However, it wasn't until our trip last year that I finally got to drink something that made me think the Australian palate might be developing. I still didn't get anything outstanding, but at least I got something that was better.

At my sister's birthday drinks, held at Edgar's Inn I asked the barman what he would recommend. He suggested the draught James Squire 150 Lashes Pale Ale. It turned out to be an improvement on the XXXX of my youth, but that wouldn't be hard. It was disappointingly nothingy. No hoppiness, very little malt, and as usual, served utterly frigid (which turned out not to matter, as it warmed up quite quickly in the beer garden atmosphere and wasn't improved). It was completely innoccuous, drinkable, but not something you would make any effort to return to. 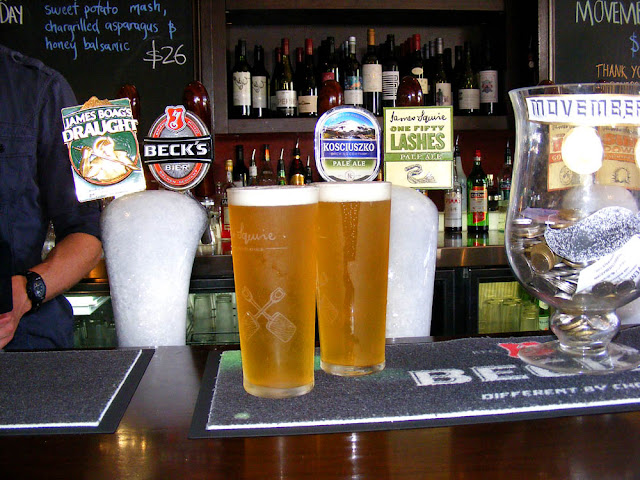 The bar at Edgar's. I'd never seen ice cooled taps like this before. Note too the jar for donations to the Movember appeal -- half the male population of Australia was going round looking like they were on an 80s retro kick.

Luckily I discussed my dilemma with some bloke at the party. He recommended I try something from the Little Creatures brewery if I saw it, and when we were in Manly having lunch at a restaurant that had it on their drinks list I leapt at the chance. We tried the Little Creatures Pale Ale and the White Rabbit Dark Ale (the two breweries seem to be connected).

In the old days, Simon, having access to the more sophisticated choices available in New South Wales, could quaff Tooheys Old -- a drink that I never encountered in parochial Queensland. Of all the muck produced by the big brewers in Australia this is the most drinkable, being an acceptable but not inspiring dark ale. We expected the White Rabbit offering to better it, and it did, but not by that much, and in fact, the Little Creatures Pale Ale completely outshone it. It helped both drinks that the restaurant went a bit easier on the chilling too. 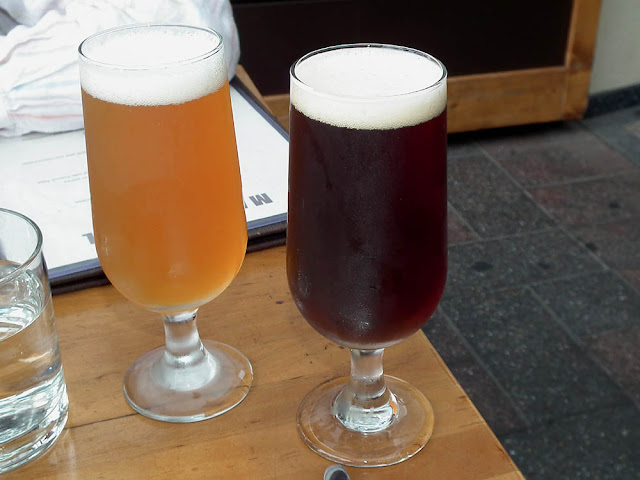 Normally you would expect a dark ale to be packed with flavour and completely overpower any pale ale. Not so in this case. The White Rabbit was nice enough, but lacking in oomph. The Little Creatures Pale Ale had much more going on and was a nice drop -- still not really outstanding, but quite good.

Here are some quotes from the Beer Advocate that echo my experiences and could have been written by me:


The character it has sets it above most Australian macros but still a very average beer.

Mediocre brew in the land of lousy brews.


...decent flavor although it could have been a bit more nuanced.

An interesting beer, but not groundbreaking.


It's inoffensive, but there is really nothing here to entice real beer lovers.

Not unpleasant, just too subtle and weak.


Good and drinkable with lots of tasty hops notes.

Of the beers I've had from Australia, this ranks in the top 3, and it is widely available.

So thank you anonymous bloke from Kathy's party. None of these beers would compete in my affections for most British bitters or ales or any Belgian beer, but it is nice to know that the situation is improving.
Posted by Susan at 09:00

I would wreckommend anything from Cooper's Brewery... I've found them full of flavour. Pale, Dark and Stout are distinct in their taste... with the stout having the longest finish.
It is a family owned brewery... unlike Little Creatures which is owned by Little World Beverages, a subsidiary of Lion Nathan the owners of Castlemaine [of Four Excess fame], which is a subsidiary of Kirin Holdings Company Limited the Japanese brewery chain.
I've also had Bootleg beers before... I think that they are an Aussie brew.

But most "commercial" beers on the market seem to lack a finish! Nice nose, good flavour, no finish... keeps you sipping... keeps their coffers full.

We are off to a brewery today... at Cormery... very nice beer, good finish too... but more expensive than the supermarket!!

Tim: I had Coopers many years ago, before we left. I thought it had become mainstream, but I didn't see it anywhere.

Defnot mainstream... World of Beers in West Norfolk and the Beeritz chain of shops in Yorkshire and some other small beer-oriented drinks shops are the only outlets that I've seen it in... other than that, some independent pubs... [genuine free-houses that is]... and the Foreign Beers counter at beer festivals. The latter was where I've had Bootleg which I discover is Aussie.
But none of them are long on the final hop... unlike a lot of American micros. Dry hopping is a fine art... even Greene King Abbot and IPA aren't a patch on what they were... I think that the latter is now "dry" hopped with hop oil of all things... gets there on flavour immediately... and without mess when cleaning the barrels... probably the reason, cuts out at least one wage on the brewery floor.

Try Brew Dog's IPA if you see it... available I know in the London area... brewed to the original strength for an IPA at 7.6ABV and hopped late in the boil, dry hopped in the fermenting and finally, a handfull of hops in the barrel... and I think that there are three different hops used at the later stages.

It was the First World War that cut the gravity of UK beers so much... most of them matched the Belgians strength for strength.

Tim: I meant mainstream in Australia. I expected to find it on tap in pubs, but didn't.

Ah-ha...
I see your point...
seems they are aiming at markets where their skills might be more appreciated?

If you visit Costa Rica...bring your own beer!
The Imperial, Bavaria and Pilsen all come from the same factory...the brews are never the same twice....

Sorry, just looked BrewDog's IPA up...
it is 9.5%ABV....
it is Brewdog's "IPA is Dead" that is 7.5%ABV.
Both brewed in Scotland by a couple of complete nutters....
beer mad, intelligent, rebellious nutters that is!!
IPA is Dead comes as a four pack...
each bottle featuring a single varietal hop in its making.