Last Anzac Day you may remember I wrote about my Great Uncle Eric, younger brother of my paternal grandmother, who was killed in the Second World War when the unmarked prisoner of war ship taking him to Japan was torpedoed. Since then I have discovered that one of his nephews, my second cousin Simon, who is a journalist, wrote an article a few years ago about Eric and the effect his death had on the family. Eric is represented by quotes from his many letters home, coming across as a caring, well educated stoic, remarkably mature for his age.


Letter from Eric Mann to his nephew, my father. 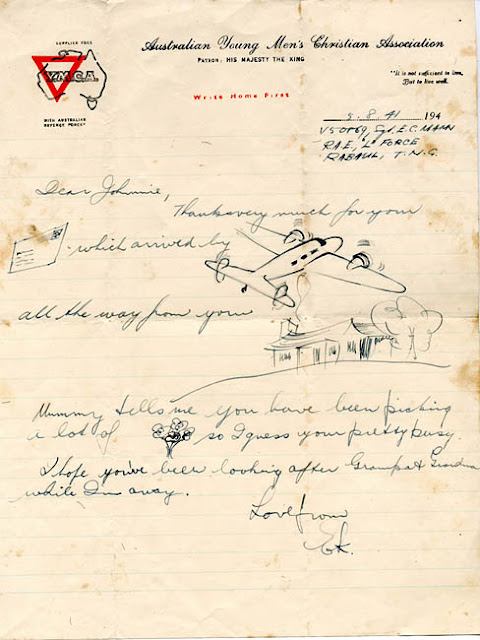 
Dear Family
I am a prisoner of war with the Japanese (censored), please don't worry, we'll just look forward to the day we are together again. Give my love to Gran, Johnnie and the rest and look after yourselves,
All my love,
Eric

Johnnie is my father, who dreamed of becoming an architect like his aunt and uncles (sadly, for reasons unconnected to the War, this didn't happen). You can read Simon's full article here.

Above is a letter he sent to my father from Rabaul before the Japanese invaded. My father would have been very nearly 5 at the time it was written. It's a really charming little letter, with its sketches to make 'young Jocko', as my father is referred to in another letter, feel special. He was probably still a bit young to be able to read on his own so Eric has drawn him some pictures. No wonder he treasured it all these years. The bunch of flowers, incidentally, will be violets, which my grandparents grew on a commercial scale, supplying florists in Geelong.