A while ago I posted about having to park at the bottom of the laneway to our orchard because it has all been churned up and I couldn't get the car up the slippery slope.

Shortly afterwards, one of our orchard neighbours, Madame G, who works in Saumur and keeps up with Preuilly news partly by reading the blog occasionally, came up to me in the market place. She asked me what the story with the laneway was, and I said that all I knew was that sometime in the late autumn the ditch opposite the Moulin de Chanvre had been cleaned out, with the spoil dumped on the adjacent field, and the heavy machinery having made a mess of our laneway. Then in late winter, the commune of Preuilly churned it up even more when they were pruning the laurel hedge at the nearby sewerage works. 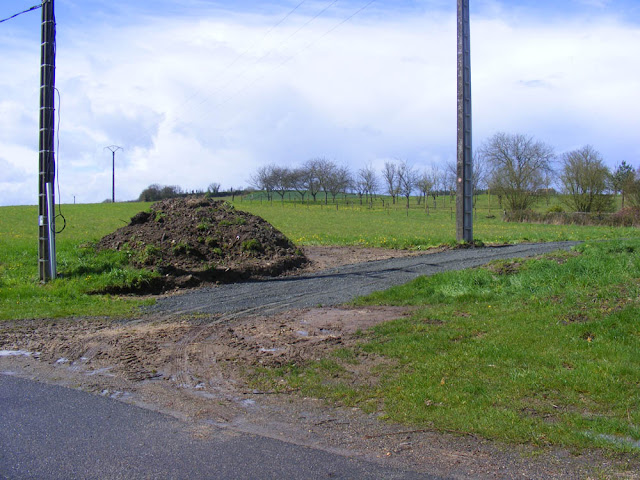 She suggested that we visit the mairie at Boussay and ask them to repair the lane. Our orchards, and the laneway, are just across the communal border, so Boussay, not Preuilly has responsibility. So, the following Wednesday she picked me up and off we went.

We were in luck, because when we got there Madame Ligaud, the mayor, was in reception. She is an attractive and dynamic woman in her 50s (or perhaps slightly older) and was very happy to listen to our case and said she would do what she could. She established exactly where we were talking about and told us that the ditch cleaning had been an emergency operation. Apparently the culvert under our lane got blocked and the road flooded, making it impassable. The border between the two communes is the ruisseau which runs along side the lane, in front of our orchards. The commune of Preuilly didn't feel to take responsibility for the blockage ('they don't like to put their hand in their pocket!' -- not the first time I have heard this remark...) so the commune of Boussay came and sorted the ditch out, but inadvertently left us with a pile of mud.

On Friday I nipped down to the orchard in one of the sunny half hours to find that sometime in the last few days, the commune of Boussay has been and levelled out the lane and rolled a load of blue metal on top. It looks good and I hope will prove to last. The lane doesn't get much traffic -- just me, Monsieur Ch and the Madames G or their mower man. A busy day is when more than one of us is down there at the same time. As we happened to pass Madame G's house on our after dinner walk that evening I popped in to tell her the good news. If she hadn't suggested visiting the mairie, I doubt if anything would have been done, so thank you commune de Boussay and thank you Madame G!

Yes pity they didn't go to the road! We have had no rain this morning YET but I can see blue sky YESSSSSS.

I suspect the quantity of chippings is the end of another job, which is why they didn't quite make it to the road. Better that than skimping where they did put it. The best bit is they have levelled it out and fixed the alarming camber that meant you felt you were going to end up in the ditch.

That's a good result, and one which shows that what you know is important but who you know also helps !!

What is blue metal (other than metal that is blue)?

Ken: Blue metal is the name for the basalt chippings used in road building.

Well done! You must have acquired some useful new vocab. Have you managed to do anything about the orchids on the way back from the chapel?

Fraussie: we had a good laugh about the fact that Mme G pays a whole €12 more taxe foncière because there is a shed on her land. The way it is listed on the form makes it sound much grander than it is.

I haven't made any progress with the médiathèque orchids. I just haven't run into Gérard often enough to start softening him up properly.

That's how my first commune used to be...they'd always sort out a problem if they could...using whatever they had lying around from other jobs.

Fly: It's such a win-win way of operating.