Breast of lamb and I haven't had a good relationship in the past. I once bought a breast of lamb from the Ginger Pig in Borough Market when we were living in London on a single wage and fairly broke. Even when we were impecunious I bought our meat at the Ginger Pig or direct from a couple of trusted producers at farmers markets, because supermarket meat in the UK in those days was such a disappointing waste of money. Breast of lamb, pork liver and several other cuts of meat had been suggested to me as cheap and tasty, and as the man next in the queue at the butcher's said to me 'Blimey, you are really skirting around the fringes of the beast, aren't you!?' Sadly, the instructions for cooking the breast I had also received resulted in no meat to speak of and gallons of unappetising fat and sinew (not the Ginger Pig's fault, I hasten to add, but my lack of experience with this challenging cut). On the plus side, the ideas for extending liver paté I continue to use to this day.

Nevertheless, when the wonderful Skint Foodie, who also shops at the Ginger Pig, posted about cooking breast of lamb and it coincided with locally produced lamb breast appearing in SuperU, I was encouraged enough to give it another go. 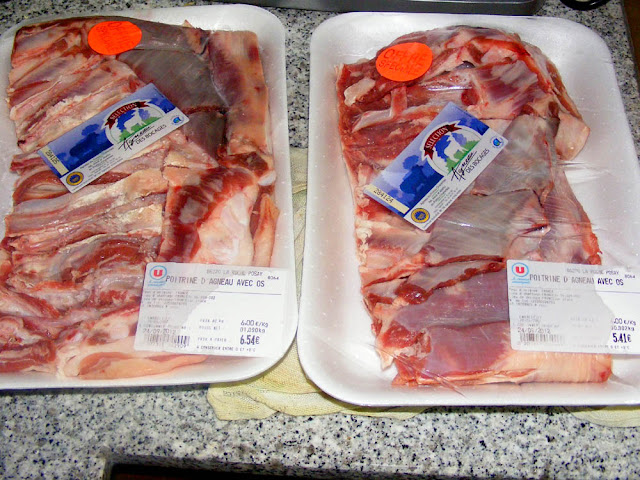 The only recipe most people know for breast of lamb is à la Ste Menehould, where the meat is slow cooked, boned, then cut into batons that are crumbed, grilled and served with a piquant sauce. This has always seemed like a messy business to me, so I was quite interested to try the Skint Foodie's approach to getting something edible out of a lamb breast.

I'm happy to report that his rolled pot roast style worked very well, producing a delicious rich gravy and perfectly acceptable slices of mostly meat. Sadly I didn't get to do ribs, as the lamb I purchased came with the ribs already removed, tant pis.

The pieces of lamb I bought came from Poitou-Charentes, our neighbouring region, and is a particular type known as agneau des bocages. The meat was IGP certified. That is, the sheep must be extensively raised in a particular geographic area (the region of Poitou-Charentes), lambs must be raised on their mothers milk for a minimum of 60 days, and be between 70 and 300 days old at slaughter. There are about 1000 certified producers and their lamb makes up a quarter to a third of the IGP certified lamb sold nationally, and 7% of the total tonnage of lamb in France. The agneau des bocages is a sort of sub-set of the Poitou-Charentes lamb, with only about 5000 beasts in production at the moment, but a market is being developed specifically aimed at supermarket sales. (Bocage is a type of traditionally managed pasture, now existing only in rare pockets.)

--------------------------------------------------------------
Today is Earth Day, part of an American environmental movement lauched in 1970. This year's focus is on climate change and themed 'The Face of Climate Change'. The movement is about more than just this one day though, and is involved in projects worldwide to educate about the environment and support sustainable life practices. This year the Center for Biological Diversity is offering Endangered Species Condoms as their contribution to raising awareness. This is a continuation of a series they began several years ago. I'm assuming they have become very collectable. More examples, from a few years ago, can be seen here.
Posted by Susan at 09:00

I've never heard of the first method!
Me Mum, 'er Mum and me 'ave always dun the Lunnun method, know what I mean,...
of slicing gently along the ribs from the inside...
BUT not through to the "skin"...
and rolling the meat around a stuffing...
usually chopped/minced offal, breadcrumbs, herbs, salt and pepper...
INSIDE [ie. ribs] OUT...
and pot roasting it.
Gran always used a piece of greaseproof paper at each end to keep the stuffing in...
mum never bovver'd...
and, as the meat shrank, stuffing oozed out the end and mixed with the gravy.
I once tried a recipe that said remove the ribs first...
don't bother...
took ages, wasted meat...
Jean's Faff Factor...
off the scale!
But for presentation, try this...
tie up as normal, but stand it upright on onion "scales" to stop the bottom burning and allow liquid underneath initially...
pack the prepared veggies around it...
pot roast as normal...
take out the meat and stand it on the serving plate and put the veg...
or as many as possible...
around the bottom...
Hey Presto...
Crown of Lamb {the CHEAP CUT}!
Serve by cutting down between ribs.

I agree, the fat on lamb can be quite unappetising - a little goes a very long way. My mum used to do a slow roast piece of lamb shoulder every Sunday for dinner and with the leftovers she would make shepherd's pie, which meant we got 8 meals from a fairly small joint. Unfortunately even shoulder is quite expensive these days.
I sometimes think cheaper cuts can be quite wasteful if you end up discarding too much of what you have paid for, even if it is the fat and gristle. One disappointing experience with a cheap cut and I would probably live on beans until I could save up for a lamb chop !!

Tim: sorry, but stuffing a fatty piece of meat is gross.

Jean: Breast of lamb was one of the few cheap cuts I couldn't successfully use, but normally long slow cooking sorts out fat and gristle.

Susan, the stuffing isn't a fatty pork type... it is breadcrumbs, liver, heart, kidneys, 'erbz, onions [optional] S&P... designed to soak up the fat and extend the "joint" [and make the liver, kidneys and heart more acceptable]... these cuts were destined to feed a family for at least two sittings, one hot and one cold in our household.... plus a hearty soup from the leftovers.

The thought of putting a pork typr stuffing in a fatty joint revolts me too!! "Yucky" doesn't cover it!!

The Larousse Gastronomique says that poitrine d'agneau is usually trimmed and then made into a ragoût or a sauté. I think it would be good slow-roasted in the oven or on a barbecue grill, with a vinegar-based barbecue sauce, to make lamb spare ribs. I can't wait to try it. A mustard sauce could also be good. See this post, but use breast rather than leg or shoulder. Let the fat render and leave it in the bottom of the cooking dish or pan.

By the way, Susan, the packages of lamb breast you show in the photo say they are avec os... with bones.

I could not believe the price of lamb when I first moved to France from the U.K....it put lamb breast in the luxury category.

I used to make it rolled with herb and oatmeal stuffing, but also cut up and cooked with sweated onions, tomatoes and a touch of curry powder (as then sold on the exotic products shelf of Super U).

I remember when the mad cow scare was on and live imports from the U.K. were forbidden....one gentleman in our area was making a good living selling 'local' lamb, but could no longer continue to supply his clients when he could no longer import his lambs from Wales and leave them on his fields for three or four days.

All perfectly legal, of course, just like oystermen buying in oysters from Ireland and leaving them in their holding tanks for a week or so before selling them on as local produce...

I'm all for supporting local initiatives - as long as they are local.

Ken: I knew you'd pick that up :-) In fact they came with no rib bones. The only bone was the half spine along the top edge.

Fly: Yes, it pays to know your supplier.