A Surprise Visit from Strangers

Just as I was packing the car to go down to the orchard on Monday last (and had just discovered that my key had gone AWOL) a car pulled up beside me in the courtyard. I'd noticed the same car go up the street extremely slowly only a few minutes before, so I assumed they were lost.

Curiously, when she wound the window down, the woman passenger's first words to me were 'Parlez-vous un peu de français ?' I'd never seen her before, so it didn't dawn on me that she had already guessed who I was.


Gérard and Marie-France in our kitchen. 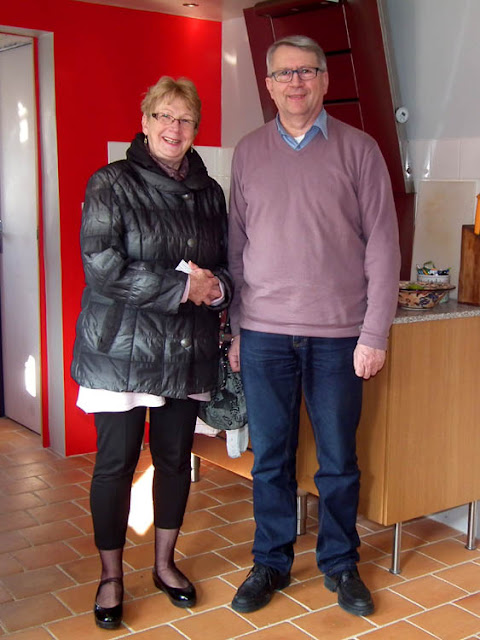 It turned out that her husband, driving the car, had grown up in our house. The reason she knew who I was because they read the blog! Their names are Gérard and Marie-France and they live in Sainte Maure de Touraine.

Gérard is the son and grandson of the last owners who ran the property as a grain merchants. His family lived in our house and his grandmother lived both in our house and next door in Ghislaine's (although I'm not sure what the sequence was, or even if it was two different grandmothers). He told us that there used to be a big horse trough in the back yard, which in those days was walled, and that he had scribbled all over the walls of the office (our pantry). The business dealt not just in grain but also in walnuts. He has confirmed that we do not have a cellar, but commented that Patrice, at the end of the next driveway, has an enormous souterrain under his workshop.

The raised section of Ghislaine's yard was where his grandmother's orchard was planted. He described the layout of our house in his parent's time, with two stoves, one oil, one wood, where we have our stove and opposite. There was a sort of kitchenette where we have our dining area. What was his bedroom is now our spare bedroom ensuite bathroom. Our spare room was once his grandmother's bedroom, and he remembers what a cold room it was (still is, even with the new insulation, it's always the coldest room in the house). Their bathroom was where our office is, but it was a pretty basic affair -- really just a wash basin. It did not include the large cast iron bath that we had to deal with when we started renovating.

I mentioned that I will be in Sainte Maure several times over the next few months, so I have a standing invitation to come and visit them. They, and more particularly, Gérard's sister, have photos of our place from the first half of the 20th century, and I am quite keen to see them. They left Preuilly in the mid-sixties. And what a coincidence! Gérard's sister is called Claudette!!
Posted by Susan at 09:00

Bleedin' marvellllous!
What a wonderful surprise... and what a lot of recent history... how long can you hold off visiting, I wonder?
If t'was me... I'd've been there twice already.

Amazing story. You seem to collect more friends than the Pied Piper! ;) What's your secret? Martine

That is amazing and really a lot of fun. Gerard and Claudette were really nice to look you up. I hope you get to see the pictures soon.

You must be very pleased to have been outside the house as otherwise they might have driven on.

A charming story, Susan and great to have added to your knowledge of the history of your home.

how wonderful to be able to see those pictures.....and to get info on your house

Excellent...how lucky to make contact with the past for your property...such nice people.

That is just super!

that's great! how nice to be able to get more history about your house :-)

What a wonderful experience! When we met one of our neighbours, whose family has been living in our area for generations, she was able to give us all sorts of information about our house. Our previous owners made a folder for us with all the papers they had and that's how we discovered the name of the house, which they had never used. I love imagining the lives of the people before us.

wow, what a goldmine of information. how wonderful they came by. Seeing those old photos should be interesting.