What Big Hairy Feet You Have!

One of my favourite beetles is the Lesser Bloody Nosed Timarcha goettingensis. They do everything ponderously and can be seen in almost any month, unless it is really cold. Look for them on bedstraw Galium spp. They are a type of leaf beetle Chrysomelidae, so spend their time munching their way through their favourite plant.


A male Lesser Bloody Nosed Beetle making his ponderous way across our driveway. 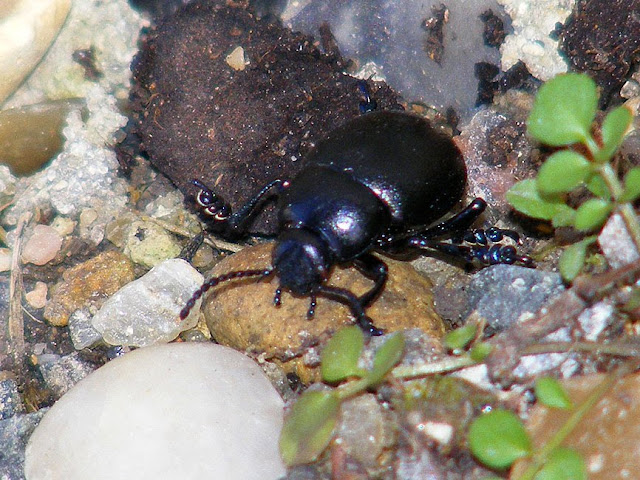 Males and females are easy to tell apart. Males are smaller, and have noticeably large spread feet with a thick velvety underside. In the last decade or so, scientists have been getting very interested in this sort of feet. Many of you will probably have heard of work being done to find out how geckoes can climb plate glass and what the applications for humans might be. The interest in these hairy beetle feet is similar.


Terribly undignified, I know, but I tipped him over so you could see the pads on the feet. 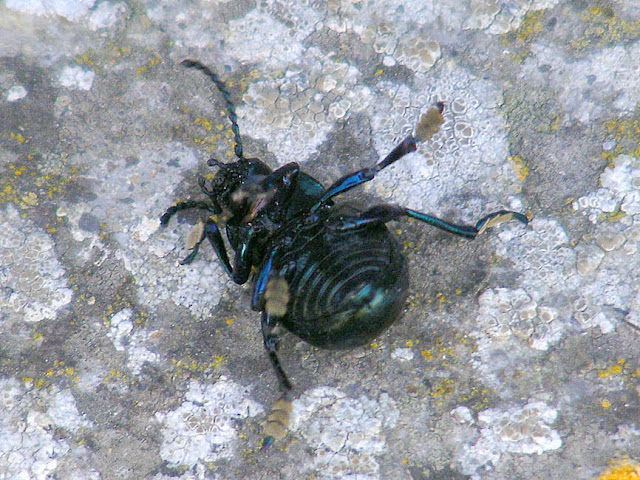 The male beetle has to be able to stay 'on board' when mating, but the female beetle is very smooth and shiny. The special pads on the male's feet mean that he can 'glue' himself at a molecular level to the female. His feet have three different sorts of hairs, with different shaped tips. This allows him to stick if he moves his feet in one way, and peel himself off if he moves them in another. Scientists have recently created an adhesive tape based on the same principle. It doesn't involve any actual glue, but creates an bond, using an electrostatic intermolecular attraction known as van der Waals attachment forces. For more information see Science Daily. Such adhesive tapes will work in wet or dry conditions, and cause no damage when pulled off, so you can see there is enormous potential for difficult situations such as under water or bandaging wet wounds.

Le Jardin de Lucie has some great pictures of the closely related Bloody Nosed Beetle T. tenebricosa, including photos of them mating, so you can see the feet in action, doing what they evolved to do.

***********************************************
Weather Update: Yesterday's weather was atrocious, with very strong gusty south-east winds roaring and whistling through the village, accompanied by horizontal rain most of the day. A few brief interludes of brilliant sunshine, until finally it cleared in the evening, although it remained fairly breezy. At least it isn't particularly cold.
Posted by Susan at 09:00

"you can see there is enormous potential for difficult situations such as"... gardening! And strapping anything up in rainy conditions... or...

J'd'L's site is wonderful... personally I think that there is a "g" missing from the Latin... given what he has to do to mate, it should be "go getting ensis".... or "clingontightus" could be more apt.

I see thet the pic taken here has the usual Auto-"focus?" problem...
takes the biggest object [ie: the step] as what you are trying to capture...
I find it really frustrating...
the lichens are nice tho'...
I've started to use "Manuel" to do my focusing where I can...
he takes longer, but the results are better.

Interesting post. I have been following Lucie for some years now, she has a great blog. Keep well Diane

My favourite Beatle was George Harrison!
Sorry, couldn't resist it !

Given what Susan just wrote about this fella... George H. is the perfect choice... "The Long and Winding Road"... and he's wearing "Black Suede Shoes"... so he's obviously a rock'n'roller!!

Tim: Manual on my camera is so clunky I've given up. It didn't help that his little legs were waving around furiously...

After "autofocus" anything seems clunky... it does take longer.
Another idea would be to up the ISO/ASA/DIN speed to around 800 and stop down as far as possible... and set the camera to "bracket"... or do multiple shots... that often gives you one shot out of five [or do it twice and take ten] that's got exactly what you need... film is now effectively free... and pros used to go through three or four rolls of 36 exposures just to get the "One" shot... if I'm going insect hunting now I set the camera to five exposures as a matter of habit.

Tim: part of the problem is my camera has a slidy lever, not a turny lens. It doesn't do multiple shots as far as I know either -- in fact, its recovery time between shots is a known downside of this particular model. Simon's camera will do the sorts of things you are talking about. The only time I'm truly frustrated is when I want to take a slender damselfly on a blade of grass or something like that. I've got a couple of workarounds, but sometimes nothing works.