The Association de Botanique et Mycologie de Sainte Maure de Touraine was lucky enough to get access to the greenhouses which produce the plants used by the City of Tours for its many magnificent floral displays. A dozen or so of us were met at the entrance to the Bois des Hâtes in Chambray-lès-Tours, where the greenhouses (les serres in French) are hidden away. In total, they produce, from seed, 450 000 plants a year as well as nursing the previous year's perennials and overwintering some of the topiaries and standards (many of which are very old – at least 50 years).


Our first sight of the greenhouses, which along with the outdoor holding facility here, cover 4 ha. 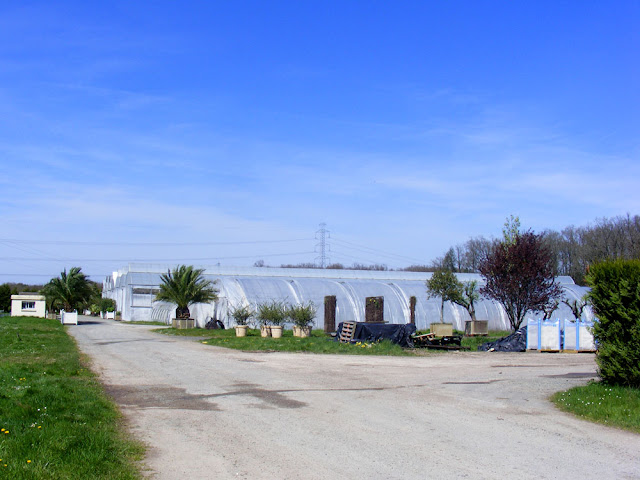 Sylvie (below left), the gardener who gave us a guided tour, with Maurice, who organised the visit from our end. The yellow and blue sheets hanging from the rafters are biocontrol sticky plastic traps. Yellow is for whiteflies, aphids, leafminers, thrips and fungus gnats, blue is just for the last two. The density here suggests they are using them for monitoring and light control. Sylvie gave several incredibly adept demonstrations of how to prick out tiny seedlings with barely two leaves, using only her biro to both extract the plant and make a new hole for it, never touching the stem or roots of the seedling. She was an absolute fountain of information about how the greenhouses are managed, and sometimes I got lost when I missed a word or two, then wasn't able to make up the ground to understand the gist. The work is extremely physical, with the plants being manhandled many times during their lifespan. Some planting of fine seed is mechanised and parts of other processes, but mostly it is gardener muscle power, seven days a week. One gardener comes in on the weekend and waters everything on their own. 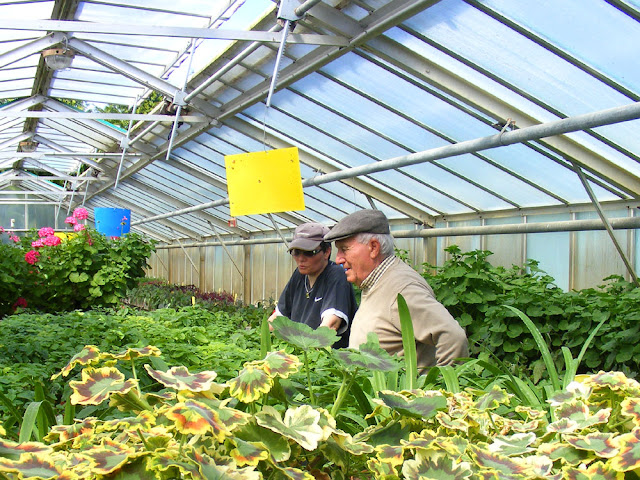 More biocontrol -- this time a card which has the remains of parasitised whitefly pupae stuck to it. These cards, with the unhatched parasitised pupae, are introduced to the greenhouse so that the parasitoid wasp Encarsia formosa hatches into the greenhouse and controls the resident whitefly by parasitising them in turn. 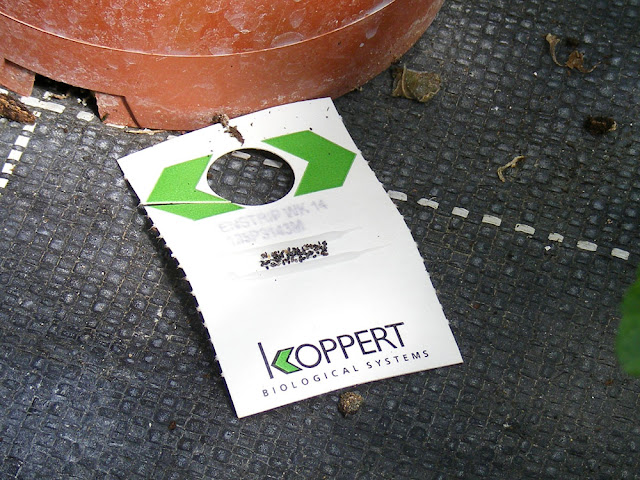 I really struggled to decide which photo of lovely foliage to put on the blog. In the end I chose this interesting copper and raspberry coloured plant, but can't tell you what it is now. 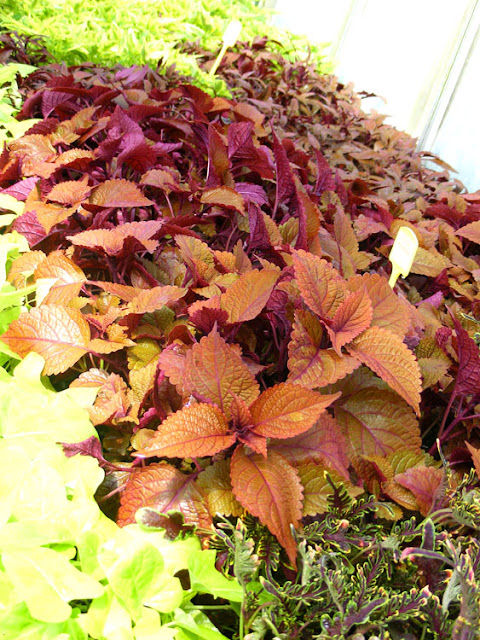 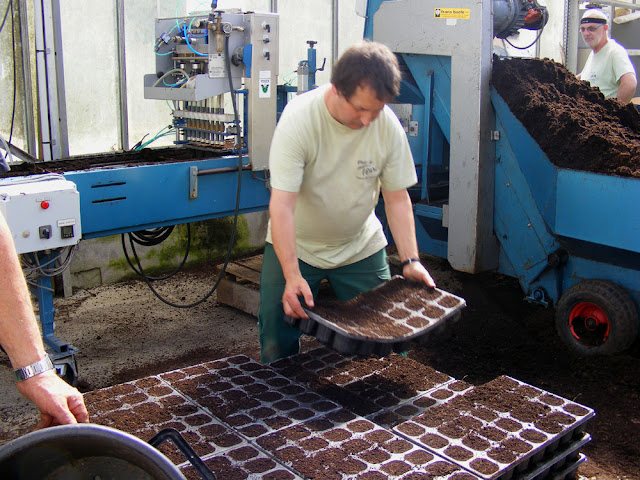 The endless task of potting on. The gardener engaged in this task said he loved it and could do it all day. To push the plugs out of their tiny cells they have a spike board. The tray is pushed onto the spike board, and up pop the plugs, ready to be plucked by the leaves and plonked in the perfectly sized hole created by the custom made dibber. 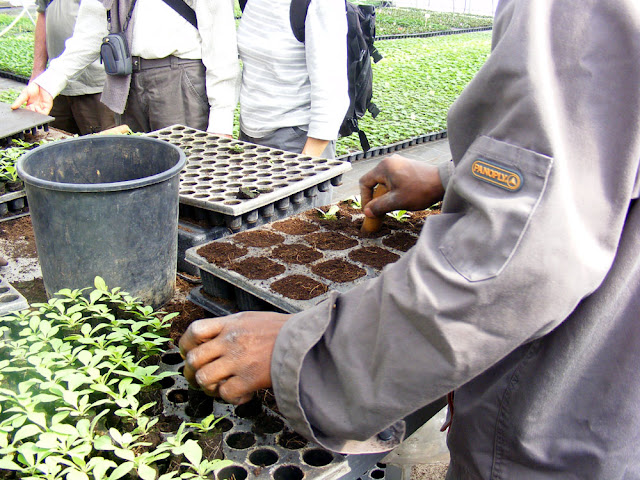 Espaliered hornbeam trees, heeled in to a pile of soil and leaf litter, awaiting their spot in this year's public display. 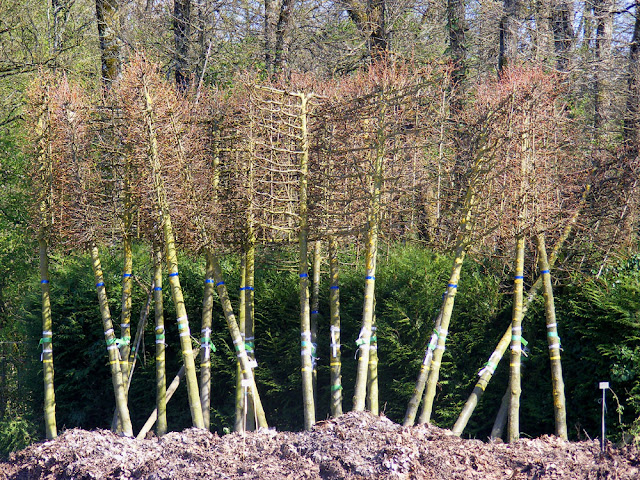 As always with places like this I was momentarily startled by the quantity of plants that to me are noxious weeds and alien invaders, but to Europeans are beloved and pretty garden plants (I'm thinking of lantana and asparagus fern, for example). Other plants being carefully nurtured in the pseudo-tropical conditions of the greenhouse over winter to burst out into colour in the summer are the sort of thing I had providing shade along the front of the verandah in Australia, planted in the ground and out in all weathers (bougainvillea). Some plants, which I have seen in public planting displays and admired, but never been able to identify have now been revealed as things like sweet potato and streptocarpus. That was a surprise -- I would have thought both much to tender to put outside even in the summer here.

Ultimately, the most useful thing I got out of the visit was an addition to my vocab. I learnt that un massif  (des fleurs) is a flowerbed. I'd been wondering what the word for flowerbed was, but never got round to asking. There was so much use of this word during the afternoon of our visit that I eventually twigged!

This blog post is going to form the basis of the outing report in the botany club newsletter. Jeannine, the secretary, spotted me taking notes and gleefully pounced on a 'new victim' (her words) suggesting I contribute to the newsletter. Either she will translate what I've written into French, or I will give it a go.
Posted by Susan at 09:00

Email ThisBlogThis!Share to TwitterShare to FacebookShare to Pinterest
Labels: Gardens and Parks, Tours

My Lantanas never made it through the winter...
very rarely do!!
Needs a greenhouse....
that's probably why it isn't a weed shrub in Europe...
but a much loved "challenge"!!
And all gardeners LOVE a challenge...
don't they??

PS isn't the coppery-red thingy a type of cultivated deadnettle? Often seen in student flats in NL as they are very tough!

Susan, I bet you can do it! I'm really impressed at how your French has come on. Even specialist terms. I'm sure this is the result of hard work on your part.

The copper-coloured plant looks to me like a Coleus...
I've seen them used in bedding in Liguel...
not my kind of plant tho'...
looks as though the plant is sick... there is a Heuchera this colour, too...
not only looks sickly but sounds it as well!
Now back to the digging....

Carolyn: It's the specialist terms that are the easiest. The most difficult is slang and conversational stuff.

Ant and Tim: I couldn't decide between deadnettle and coleus. It looks like deadnettle to me, but I think (and my vague memory is) that it is coleus. It's certainly surrounded by other coleus.

I love these reddish plants. Not generally keen on coleus as they look artificial and over the top, but a red tinge on a plant doesn't look sick -- it looks like healthy new growth protecting itself from the sun.

chm: thank you, you are very kind to say so.

Red tinge yes, fine...
we've got a nice, dark red Heuchera here... very attractive...
it is the amount of yellow that is there that turns me orf!!
Got the digging done just before the front hit!!

That was a super post...I'd been to small town serres, but this is almost industrial in scale.

Fly: One of our members is the Head Gardener for one of the small towns in the area. She was very interested in how different it was to her operation. She buys all her plants in and has complete free rein with regard to planting schemes. At Tours, the greenhouses supply the whole conurbation and planting schemes are decided by the local councillors responsible for each of the different communities.