On Sunday 14 April the Association de Botanique et Mycologie de Sainte Maure de Touraine had an outing to study the mosses and liverworts (together known as bryophytes) of Sainte Maure. They are quite an esoteric field, and I know next to nothing about them. However, I went on last year's moss outing and enjoyed it, and it is always a good opportunity to practice my French. Plus the day was forecast to be absolutely beautiful, and it lived up to the predictions.

Our first moss of the day, found at the lavoir. It is called Wall Screw Moss Tortula muralis and has smooth hairs with white tips. It grows on mortar, concrete, limestone or base rich walls. 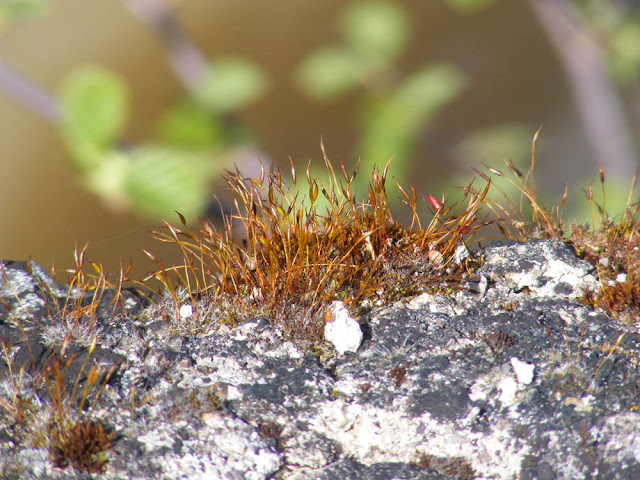 The new president of the club is Christian. He took it upon himself to act as my passanger navigator, which is just as well, as I find Sainte Maure completely confusing geographically, and always get lost there. Here he is taking a sample of liverwort from the lavoir. 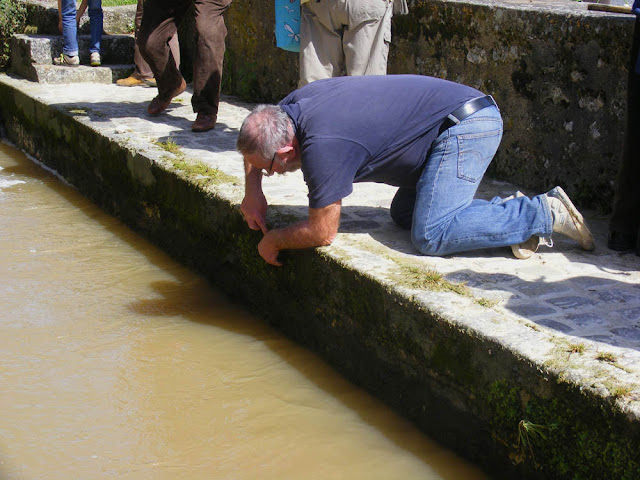 The liverwort he was after is Crescent Cup Liverwort Lunularia cruciata, and I photographed the sample. This species has a pattern caused by air chambers visible on the surface and crescent shaped reproductive bud cups. It grows in greenhouses, paths, garden borders and lawns. 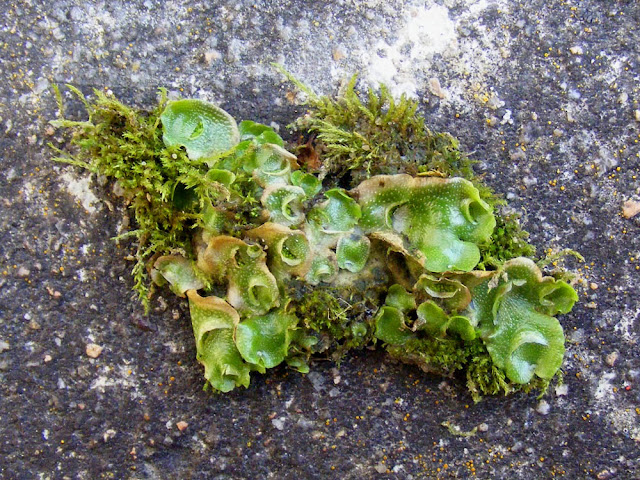 After the lavoir the group checked out some trees near the carpark across the road. At one stage the police cruised by, but simply nodded politely and went past. We wondered if someone living in the housing estate had called them because there was a bunch of weird people gathering around each of the trees one after another and performing strange rituals. Christian spent most of his time at this point reminding people to watch out for the dog turds. 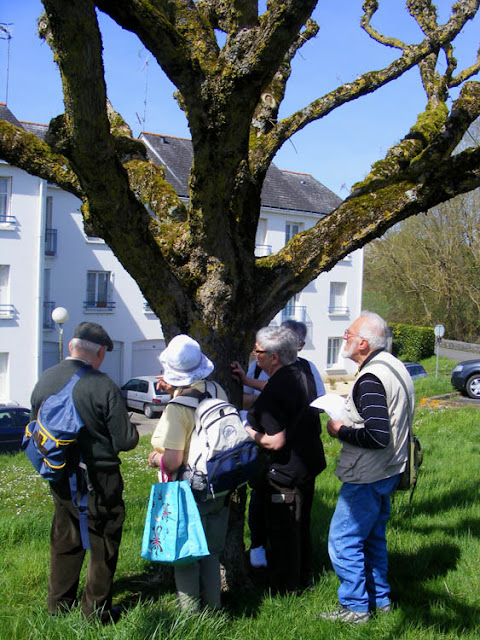 Mosses look completely different when they are dry, and can become unrecognisable, so Jeannine carried an atomiser which she deployed when necessary to moisten a sample for identification. We were surprised at how dry some of the mosses were, considering how wet the weather has been. Sainte Maure is on a plateau though, and may have had less rain. 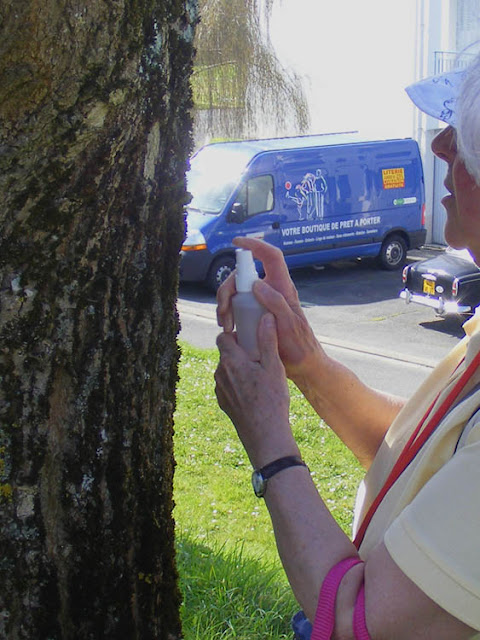 Our next stop was the 19th century chapel, built on the remains of a 14th century chapel, dedicated to the virgin saints Maure and Britte. The water from the nearby sacred well is said to cure psoriasis of the scalp. 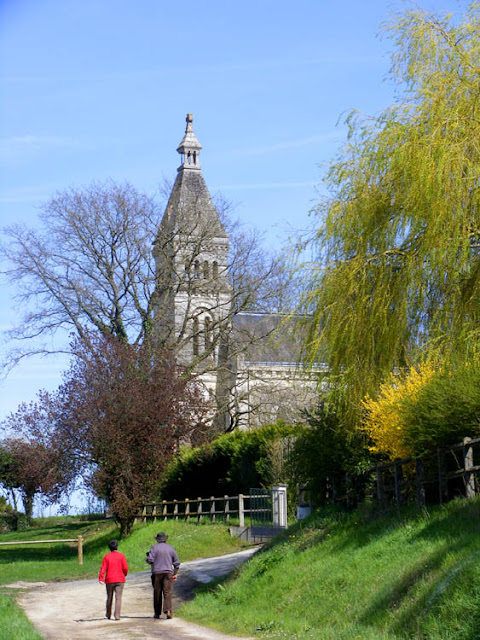 On an exterior wall of the chapel we found a tiny button of a rather rare moss for this area, Thickpoint Grimmia Schistidium crassipilum. Here Paul is taking a good look. 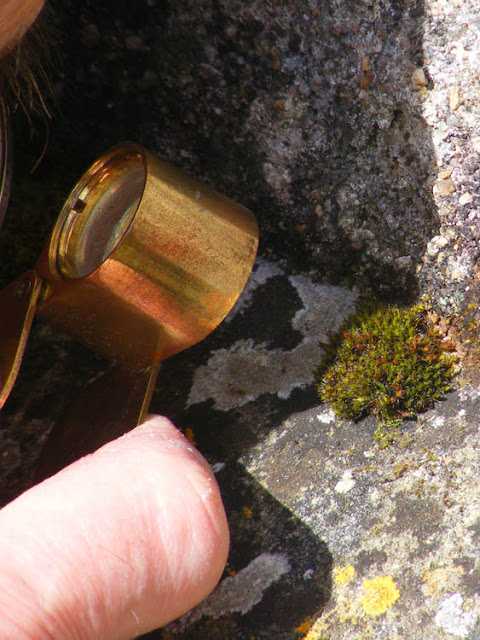 We didn't ignore other subjects that came our way, identifying any plants of interest and noting the insects. This is a Glow worm larva Lampyris noctiluca, found on the roadside bank near the chapel. They look rather like a large ladybird larva. 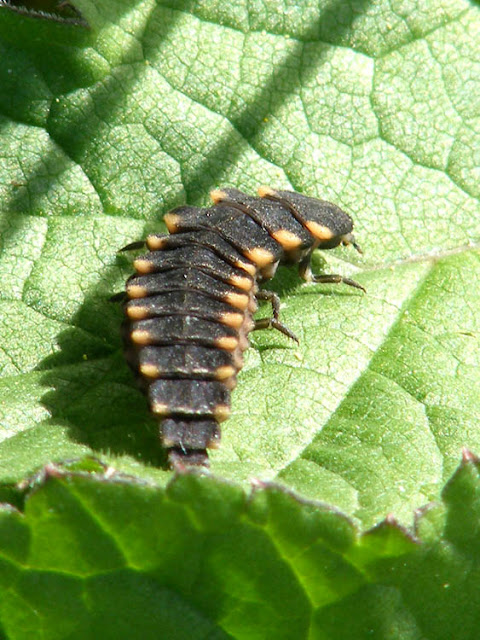 I'm pleased to say that I remembered having seen the Crescent Cup Liverwort last year, and I may remember a few of the mosses we saw this year. In any event I now have photos of 15 properly identified mosses that I can add to Loire Valley Nature in the fullness of time.
Posted by Susan at 09:00

Great shot of the Glow-worm larva... and the Lunularia.
One of the Wildlife Trust's quarterlies identified the larva as an adult female... and the picture was as clear as yours... you'd think they'd know better!!

Just looked at the Lunularia from last year.... seven-plus days earlier and it had "eggs" in the moons... way further advanced than this specimen from a grotty winter!!

Tim: I can see how one could make the mistake with the glow worm. Thanks for the comment on the liverwort -- I hadn't picked up on that.