The asparagus season has begun. Several local producers have it on their stalls at the markets.

The local asparagus is white, that is to say, it is grown by mounding up the earth around the spears to blanch them. The spears are thick and so delicately flavoured that their attraction is a bit of a mystery to me. They are more work for the producer and more work for the cook, as they have to be peeled to remove an outer layer which is fibrous and bitter. 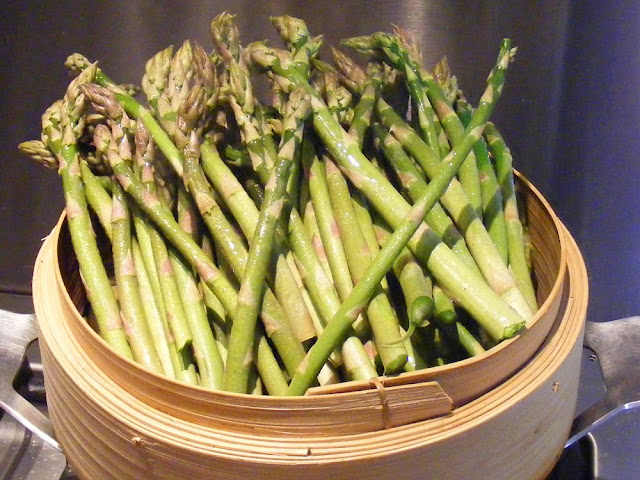 Why is green asparagus not grown here? It's grown in the south of France I believe. Obviously, asparagus is one of those things the Tourangeaux are northern about. It is probably also an indication that Paris is the biggest market and Parisians like it white.

However there is good news for those of you who, like me, live in the Touraine du sud now, but who grew up in a country where green asparagus is favoured. The asparagus and strawberry lady (who sells nothing but her own locally grown asparagus and strawberries, and a few other red berries) at Loches market is growing some green! I was so excited I paid €8 for a kilo! (€5/kg is my normal upper limit for asparagus.)
Posted by Susan at 09:00

I think that the aversion to green possibly comes from recipes that call for wild asparagus... thin wild sprues can be disgustingly bitter... at the very least far to strong for many.... ie: they have taste.

Jars of white 'sparragrass on the supermarket shelves always look so totally unappetising!!

You could always grow your own... I nearly bought the strange looking crowns last week at Lencloitre Market but decided against it.

Tim: you could have a point, and I hadn't thought of that.

C&E: I would if I could. I've planted crowns, but they don't like our soil. Edouard our neighbour said that if they haven't produced edible quantities within 3 years I might as well give up.

I prefer the green. Whenever i've eaten the white it seems only to taste of whatever I put on it!

We were put onto the green by all the clumps of wild asparagus in the vines and along the roadsides...some really thick stalks on the old established roots.

Then we grew our own...which flourished in different soils.
When you planted, did you make a tump and lay the roots out over it starfish fashion before covering?

White asparagus...not worth the bother of fussing with it.

8€ is a bit steep but I would have probably given in too :-) Wonder if the lady at Loches is the one who used to be at Le G-P [and seemed to have vanished last year].

They grew quite a bit near us when we lived in Suffolk and we'd buy direct from the farm. Yum!

Fly: yes I planted it according to the instructions, and it came from a local grower. I think it suffered by having 2 years of the 3 it's been in being unusually dry, and I haven't been able to keep it weed free either. Edouard doesn't grow it, and there isn't much he can't grow, so I'm inclined to believe him when he says my soil isn't right. I don't see the naturalised stuff much in the immediate vicinity here -- there's some, but not really where I am regularly.

N&A: the lady at LGP could be the lady who comes to Preuilly, with asparagus and walnut oil. She isn't the same as the strawberry and asparagus lady in Loches.

Jean Michel's parents used to have a market garden in Saumur and grew asparagus. JM tells me that if the white asparagus is fresh when it's bought, it doesn't have to be peeled. It's age that thickens the skin. He wasn't able to tell me why the French prefer white to green though. He says the taste is totally different so you can't compare them. I personally prefer the green.

Fraussie: yes, I would agree that white asparagus doesn't have to be peeled if it's fresh, but it toughens up within 24-48 hours, so even at the markets you are buying stuff that has to be peeled by the time you eat it often. I think the French (at least, the northern French) are into those extremely delicate, subtle flavours. In Australia, asparagus was probably introduced by the Italians, who like more robust flavours, hence the green.