Past Life at the Granary

Our property is an old grain merchant's premises and recently we met Gérard, one of the sons of the last person to run it as a grain merchant. Gérard lives in Sainte Maure de Touraine, so when I went on an outing there with the botany club, I called in on him and his wife after the outing finished. He had dug out a few photos for me, and had all sorts of paraphenalia associated with the business to show me. It was fascinating, and he and Marie-France were so generous to show it all to me and allow photographs. They look at the blog from time to time, and I warned them that their family history will get broadcast to the world.

Gérard's father and grandmother in a buggy out the back. The stables (now ours and neighbours garages) have barely changed. I think the toddler on granny's knee is Gérard and the other children are two of his siblings. 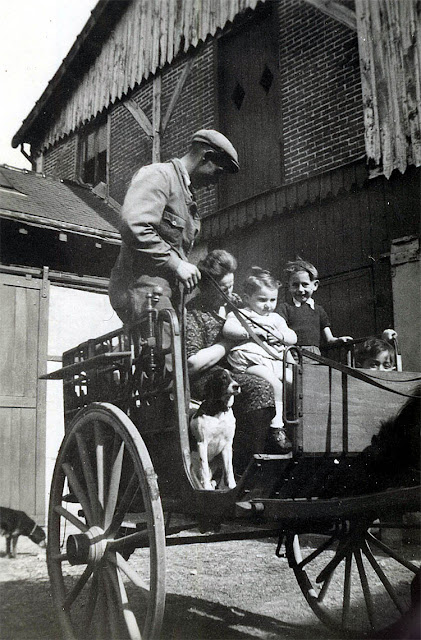 One of the pair of working horses Gérard's father kept. These horses were much admired in the district as always being in tiptop condition and beautifully turned out. On only our second visit to the house we were told about them, and many local people remember them with fond nostalgia. The horses, like most of their kind in this area, were chestnut with flaxen manes and tails (I think the breed is Comtois, although our friend Bernard refers to them as Percherons). Gérard doesn't recognise the man in the photo, but the setting is the same as the previous one. 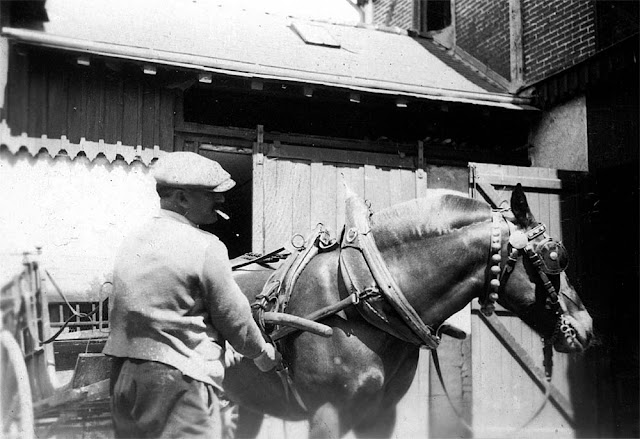 Gérard's great-grandfather's account book. The entries say things like 'July 10 Sold to Mr Barthe 100 ?s[acks] wheat at 28.80. Paid.' In other entries the wheat is measured in quintals (50kg according to Marie-France, 100kg according to Larousse) and there is an additional note saying something like 'to be delivered dry in 8 months'. 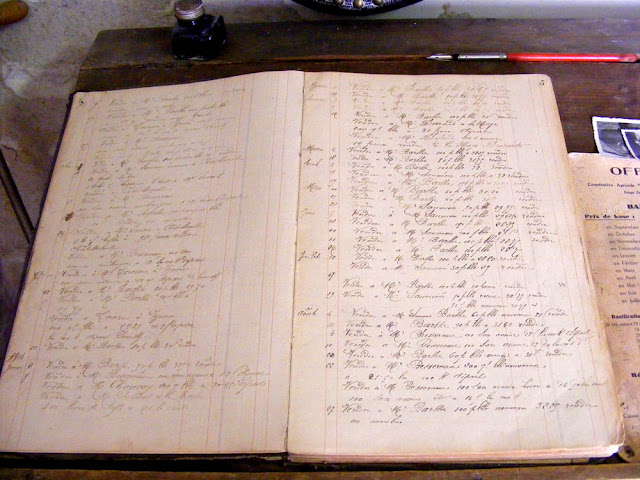 The page below says: 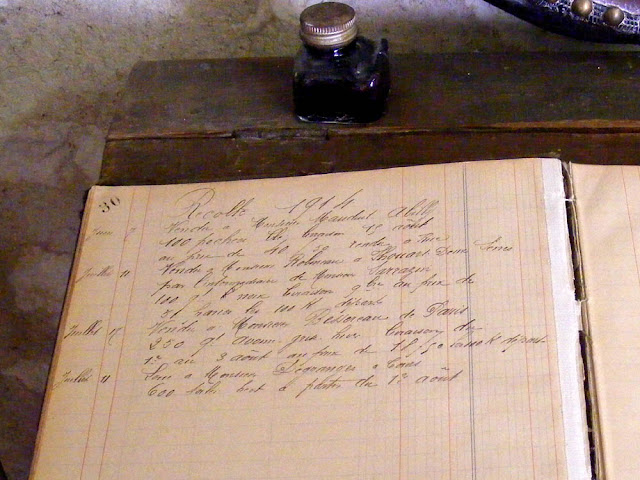 A humidity metre, which appeared to be in good working order. Its dial is reading about 82% Rh, and since we were standing in the cellar entry, I'd say that was fairly close. It has a long spike, perforated along its bottom quarter, and you plunge it into the grain to measure moisture levels. 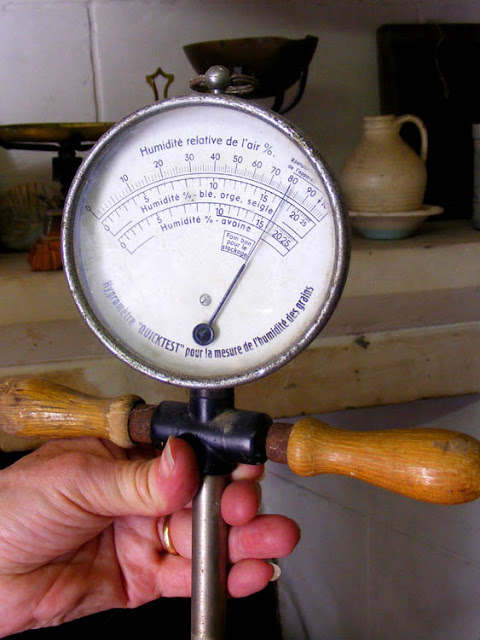 A kit for measuring the density of the grain. 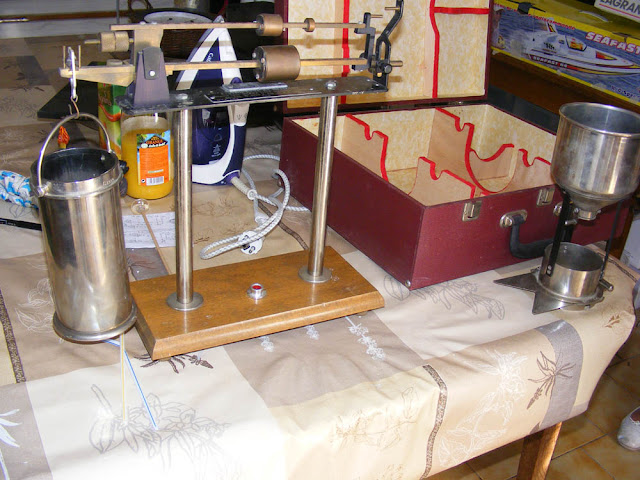 5 points to anyone who can correctly identify the tool below. What is it called (2 points) and what is its function (3 points). Neither Simon nor I got it right and had to be told what it was for, and I had to look up what it was called. 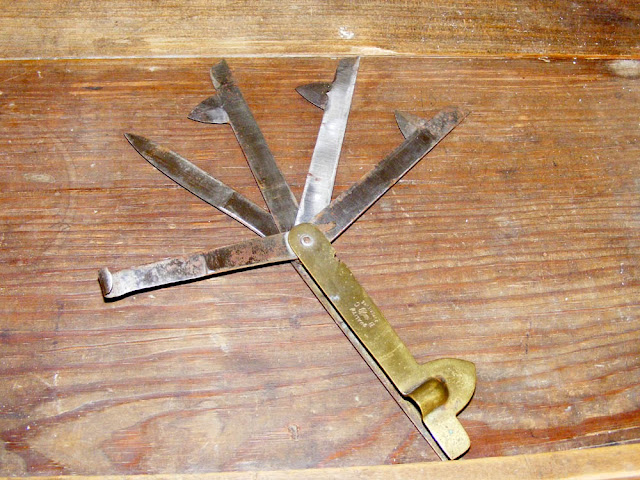 Answer to the Quiz: It is a fleam, used for bleeding horses. Here is a link to a very good article about the practice.
*************************************
Nature News: I managed to do my first butterfly survey for the year yesterday, of the Chaumussay transects. This survey patch concentrates on calcareous grassland and arable land. The weather was overcast, but not that cold, with realfeel being about 17°C and no breeze at all. I saw Wood White, Brimstone, Holly Blue, Orange Tip, Violet Fritillary, Dingy Skipper, Wall and Peacock. The first orchids are out, with Early Spiders in the orchard and Ladies at Chaumussay on the dry limestone slopes. There are Early Purples and Green-wings around too. In the Aigronne Valley the Snakeshead Fritillaries continue to flower, after being flattened by a deluge a couple of weeks ago.
Posted by Susan at 08:34

The Frits were looking distinctly papery yesterday... and already one has lost its petals and gone erect with a small seed pod.
But there are also some late groups that have appeared... slightly darker in colour... but far fewer.
The blog post itself is really interesting... I've seen the tool before... my vet of long ago had one, but with only one sideways blade and the scoop, and he pronounced it very useful for blood letting in cattle and horses... although he also said it wasn't a vetinary tool. So no idea what its real purpose was!
Given the trade that went on at yours, I would now associate it something seedy!!

I think you are right about the 'oss... otherwise, either the man is absolutely huge... or it is a miniature, slimmer Percheron.

However, I'll bet they had Percherons to haul grain carts... but not a small buggy... a Percheron wouldn't be able to fit in between the shafts!!

No idea what it is but it looks lethal... What is lost is the handwriting, I have seen many ledgers etc from the period all with that lovely handwriting. Nobody does that anymore. Should it be preserved?

Is that tool used to rip open burlap bags of grain? Wish your pictures of the ledger pages were just a little bigger and more legible.

Know what it's for: it's to bleed horses, an old vet's tool but the name ... something to do with phlebotomy ...can't remember will go and look it up.

Great photos to have :-)

My great grandfather was a grain merchant in a small village just outside Rotterdam. My father had lovely stories of playing/staying and granny & granpa's.

PS antique ones [19thC] are quite collectible.

I never knew the name in French....but I saw one years ago on my grandfather's farm - a relic even then.

Tim: the Frit patch we used for the watercolour workshop were looking in fine shape -- on private land between Charnizay and LPP, organised by Jean Pelle.

Everyone talks about the horses as being chestnut with flaxen mane and tail. Percherons here are almost always grey. It hadn't occurred to me that they may have two sorts of horses. I'll have to quiz Gérard further.

Ken: I assume you've clicked on them to enlarge? If you are interested I can send you the original full size photos. I'd be quite interested in what you can make of them.

And the points go to: 3 points to Tim and 5 each to Antoinette and Melinda. Antoinette emailed me privately with the name of the tool, and just pipped Melinda to be first.

I'd love to find photos such as these for Closerie Falaiseau. Maybe one day ...