I first encountered this rather special cheese in London's Borough Market, when the woman just in front of me cried out (in an American accent) 'Oh My God, they've got Mont d'Or!'. Hmm, I thought, if she's that excited, perhaps I should try some. I'd never seen it before and so I asked the cheesemonger about it. He explained that it was produced in the French mountains by cows that spent the summer out on the high pastures, and that it was only available seasonally, around Christmas time. Simon and I both loved it, and ever since, when we see it, we buy it, once a year, for the winter holiday period.

The milk in Mont-d'or comes from a rather special breed of cow, the Montbéliarde, and the cheese is redolent with the resinous scent of spruce. It's made in the area known as the haut Doubs, the place which regularly records the coldest temperatures in France. The Montbéliarde cow has a white head and red ears, an excellent milker which gives us not just Mont-d'Or, but also comté, vacherin, morbier and bleu de Sassenage. Vacherin-mont d'or is an AOC Swiss cheese, Mont-d'or and vacherin du haut Doubs are French cheeses made from raw milk, with a squidgy middle and a brined crust which obtained an AOC in 1981.

A box of Mont-d'or with a friend. 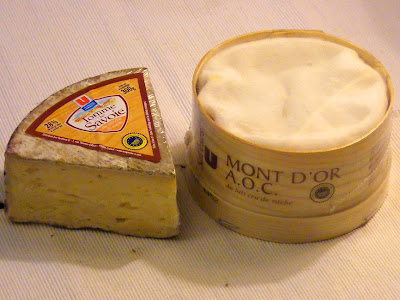 The practice of sending the cows up into the mountains to graze on the flower and herb rich grass is known as transhumance. Many places make a real carnival parade out of walking the cows up from the village or farm to where they will spend the summer. In mid August the cows come back to their sheds (summer doesn't last very long here!). This is the time when their milk production starts to slow, and is no longer sufficient to make large hard cheeses such as comté. In the 18th century the farmers came up with the idea of making smaller cheeses, named Mont d'Or after the highest peak in the area. Now there is only one family left, the Mamets, who are involved in the whole process from milking the cows to making the cheese on the farm, allowing them to uniquely label their product fermier.

Immediately after milking, the milk, at 35°C, is tipped into vats and left to mature for an hour with lacto-bacteria and rennet, which makes curds. The curd is cut into big cubes, encouraging the discharge of whey. Everything is stirred and the curd comes together and water eliminated. The cheese is then put into moulds, pressed then removed from the moulds and strapped up in spruce bands, which impart a slight woody taste. Then they are plunged into a brine bath and stored in a cave on spruce planks. For three weeks they are turned and rubbed with salty water. Then they are left to develop a crust and mature for 6 weeks. The diameter of the cheese is just slightly bigger than the spruce box they get packaged in, so when they are forced into the box the creamy cheese buckles and undulates - just like the Jura mountains it comes from.

It is quite common for people to serve Mont-d'or a little warm, by putting it in the oven, box and all, but the producers disapprove of this practice, saying it breaks down the aromas. They recommend it is consumed at room temperature, with a good wine. Many people like to cut a cross in the top and dip fruit into the soft cheese.

Hi Susan,
It seems to me you are talking about two different provinces Franche-Comté and Dauphiné and two different mountain ranges Jura and the Alps. Franche-Comté is in the Jura region and Dauphiné is in the Alps region. The cheeses in Franche-Comté, as you said are Comté, Morbier, Vacherin and Mont d'Or, whereas Bleu de Sassenage is made in Dauphiné [Vercors], where they probably have Montbéliarde cows. Sassenage is only a few miles away from Grenoble. They also have Vacherin in the Alps.

A Parisian friend has just emailed me to say he always Mont d'or with hot potatoes and charcuterie. Sounds good to me, so I think we will try that.

Well I like both Comté and Morbier, so I'll have to be on the lookout for Mont-d'or. Maybe Trade Joe's will carry it.

Diogenes: Comté and Mont d'or are not at all alike, but I like both. If you like cheese I am sure you will appreciate Mont d'or.

Hi - This is nothing to do with yummy cheese. I was wondering if you were aware of the online paper on the history of water power in the Claise Basin at http://www.persee.fr/web/revues/home/prescript/article/racf_0220-6617_1993_num_32_1_2688#

I guess you missed David Lebovitz's
blog about Comte and Mont d'or.
I am not sure I ever had Mont d'or
but will have to try it if I am foolish enough to go to France during winter.

Jim: ooooo thank you! We hadn't seen this before, and it's right up our street. Do get in touch by email if you want to meet up for a drink. You can email us via our profiles.

Nadège: I noticed DL had written a post on Comté, but didn't have time to read it. I've quickly scanned it now and find it is two excellent posts, the second of which mentions Mont d'or briefly.