The tuffeau (soft limestone) Church of Our Lady of the Stairs at 4 rue Notre-Dame in Preuilly-sur-Claise dates from the 9th, 12th and 13th centuries. A basilica style church has been on this site since the 9th century. In the 12th century the entrance and belltower were built and a large twin lancet window topped by a quatrefoil rose added in the 13th century. 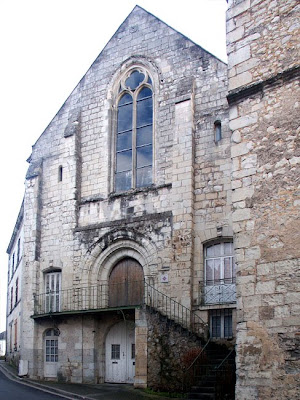 The church bears the additional name of des Echelles ('of the stairs') because it is perched high above the street, and you need to access the entrance via some steps. The building must in fact have gained this 'nickname' in the 19th century, after it was no longer a church, because the stairs did not exist during the time it was a church. In the first quarter of the 19th century the street, the main road to Loches, was driven through at a lower level, effectively raising the level of the door. Apparently this caused quite a kerfuffle at the time. Where the old porch once stood it was necessary to create a balcony accessed by stairs to get to the original door. A new door at street level was created by punching a hole through the facade.

The gable end was restored in the 18th century, in the style of that time. Some masons symbols are carved on one of the stones and a Medusa head inserted (below). 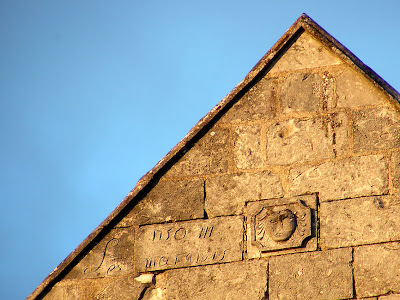 Three curiously carved stones can be seen, two on the facade (below) and one inside. These are believed to have been salvaged from an earlier Carolingian building on the site. The low relief cartouches represent either lions or horses. 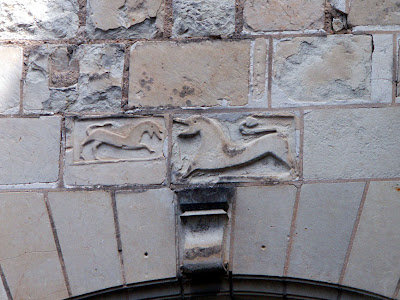 At the Revolution the priest of Notre-Dame-des-Echelles was the only one remaining in Preuilly. He was assigned to the Abbaye Saint-Pierre, which then became the sole parish church. Notre-Dame-des-Echelles was decommissioned and declared national property. It was sold to Maître Fossié, the notaire whose office was not far away in rue Saint-Melaine.

The belltower was demolished sometime in the late 19th century and the bell removed to the Hotel de Ville. Until recently, no image of the church with its bell tower intact was known, but thanks to Dr Mike Vaile, a 19th century watercolour by John Louis Petit has returned to Preuilly, clearly showing the bell tower in place.

In the 1920s the building was owned by a manufacturer of meat curing seasoning mixes and used as a venue for functions and events. It could be hired for wedding receptions or mobile cinema screenings showing films in episodes. According to Roger Lezeau, who was a small boy at the time, you could go in and see Tarzan, a documentary, a detective story and the life of Jesus, delicately hand coloured, all in the one session.

Later it held a library and the first floor was home to a local theatre troupe, which they shared with the last cinema operator. Its current owner has done a remarkable job of safeguarding and restoring the building.

Beautiful building. I rather like the stairs. But if the main floor is raised, is it made of stone?

Diogenes: I would guess it's a stone or terracotta tile floor over a stone vault, but I've never been inside, so I don't know for sure.