At least, that's what the poster said. Sadly, Simon and I don't have the stamina, and we left the Caribbean themed New Year party put on by the Ecole de Musique at 2am, soon after the main course was served. We debated about whether we could wait another 2 hours in order to be there for the dessert, but decided bed was calling more strongly. Luckily, on our way out, we were told our cake would be delivered chez nous on New Year's day.

Simon was among a handful of people who did not get up and dance (he is a member of the Bass Players Union, which has a rule prohibiting any form of public dancing). Many people clearly enjoyed dancing and were graceful and stylish. Other people, myself included, couldn't hit the beat with a barn door, but as my galant dance partner (who fell into the first camp) kindly told me, it wasn't about whether you could dance, but whether you were having fun. 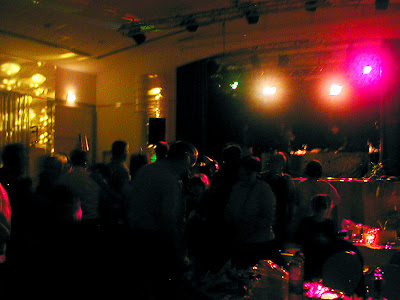 The singer, Nathalie Goutté, began the evening in 19th century caberet mode, then progressed to Cuban and later 80s disco followed by her husband DJing. I don't know who the woman in the foreground of the photo below is, but she and her husband were indefatigable dancers. You could see that she must have been a real beauty in her youth, with big dark eyes and classical western features. 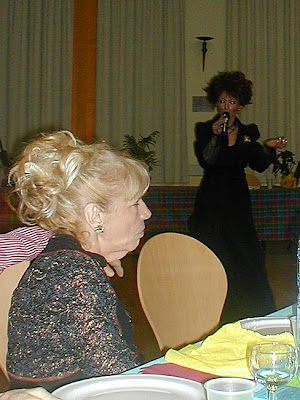 The entrée, of Caribbean spiced boudin noir (blood sausage / black pudding), pâté de pied de cochon en croute (pigs foot paté in pastry) and accras de morue (spicy salt cod fritters) caused a little flurry. An announcement was made to suggest that we did not eat the skin of the boudin. The little sausages had been made especially for the event and I suspect the problem was that the organisers had forgotten to check if the casings were natural or not (although I am not sure because I didn't understand some of the announcement). The recommended method of eating the boudin was to pull them through the teeth, squeezing the filling into the mouth and discarding the skin. This was hilariously disgusting, but the boudins were delicious, and I doubt they had any left over. I will leave it to your imagination to picture the scene and the abandoned casings littering the table. 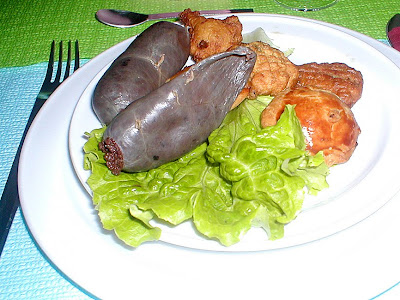 The 2008 Saumur Champigny, made from cabernet franc grapes, wasn't bad. It was selling for €8 a bottle, and I am sure every table chose it. 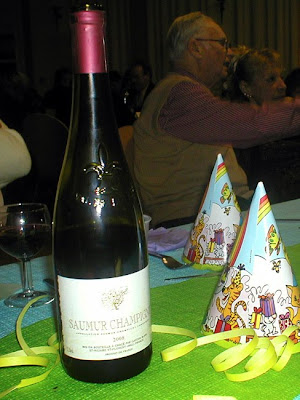 We've never been to a St Sylvestre reveillon before, so were curious to see how it went. I was rather surprised that we were the only 'anglos' there. Going to a dinner which began at 9 pm and was strung out so that the main course wasn't served until 1.40am was a new experience. Mind you, most people had scoffed so much of the 3 courses prior to the main that they didn't really want the main course of colombo (curry), rice and beans. The main difference, of course, is that Auld Lang Syne is not sung at midnight. Instead people just cheer and rush round kissing everyone on the cheeks and wishing them a bonne année.

You made it to 2 am...pretty impressive. I hit the sack at 10 pm. That boudin story about the skins is too funny. They don't look all that appetizing in the pic.

The boudin skins were... well, as they looked really. The contents were good though