Part three of my mother's diary from the days we emigrated to Australia in 1967 - here are parts one and two. This part of the diary deals with the first couple of days of living in a new country with 3 young children and a husband looking for work. 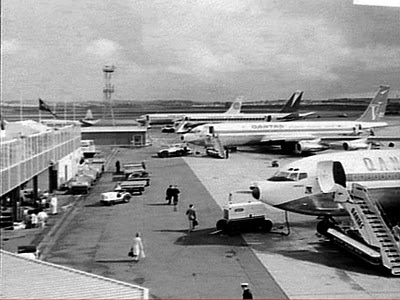 Got off 'plane - Simon sick. First time anybody felt unwell. Flying is good. You get a funny feeling on take off - not unpleasant though. Once you're up it's smoother than a car ride. If Ernie and I could have slept we would have enjoyed it even more. Not the airlines fault though. The 'plane was less than 1/2 full so we all had a blanket and three seats to stretch out on. Too much to think about I suppose.

Mr Mattison met us at airport and took us to our lodging. We are looking foward to bedtime to get some sleep.

Ernie out this afternoon for job so missed Clive Brown who called to see us. Elizabeth been asleep several hours so hope that she will sleep tonight.

Jonathan and Simon played with cars on floor. I fell asleep on chair. Got the children in bed when I woke up then Ernie and I had supper and went to bed. All three children woke up between 2 and 4 and refused to settle. We realised that it would take time for them to adjust to a different time and climate but when you are desperate for sleep and your children are wide awake - well!!! 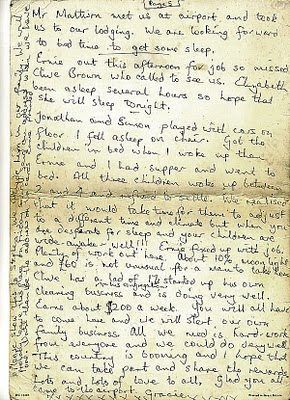 Ernie fixed up with job. Plenty of work out here. About 10% moonlight and £60 is not unusual for a man to take home. Clive has a lad of 17 in his congregation started up his own cleaning business and is doing very well. Earns about $200 a week. You will all have to come here and we will start our own family business. All we need is hard work from everybody and we could do very well.

This country is booming and I hope that we can take part and share the rewards.

Lots and lots of love to all, glad you all came to the airport

Hope you received all the cards. We sent one from each stop but at Karachi-Calcutta and Darwin we wrote the cards, paid for the stamp and had to leave it with an official to post. The other places had letter boxes.

Still can't get over Karachi. It's like something out of a comic opera. Time seems to have passed it by for a long time then they suddenly woke up. Most of the labourers at the airport wore the baggiest of shorts (or loin cloths) and sandals about 4 sizes too big The soldiers were the funniest though. They also haven't very high standards of sanitation. 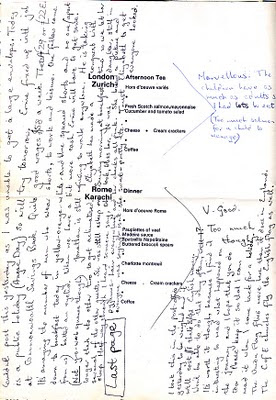 Couldn't post this yesterday as I was unable to get a large envelope. Today is a public holiday (ANZAC Day) so will try tomorrow. Ernie fixed up with job at Commonwealth Savings Bank. Quite good wages $58 a week. That's A£29 or £22E.

It's amazing the number of men who wear shorts, to work and leisure. One fellow came down to breakfast today in yellow-orange-white and blue squared shorts and no-one (apart from us) batted an eyelid. When we have a bit more cash Ernie will have to get some. (Not y-o-w&b squares though). Jonathan is still refusing to walk anywhere. He is taking longer than the other two to get acclimatised. Elizabeth has made a conquest with several of the other guests. She was still asleep on Sunday morning at breakfast time so we let her sleep. Half way through I heard someone say, oh look, bless her. It was our daughter still in her pyjamas, hair everywhere and her cheeks all pink She looked a picture and everyone was saying - isn't she sweet, pretty etc. Trust Elizabeth to get everyone hooked.

I took this to the post office yesterday to be weighed and it will cost $1 that's 8/4d English money. Won't be able to do that very often, will I?

It's worth it though, because I find it interesting to read what happened on the journey and I hope that you do too. Please keep it so that I can read it when I come back for a holiday.

The Union Flag flies more here than it does in England, The Cof E churches fly the English flag as well. 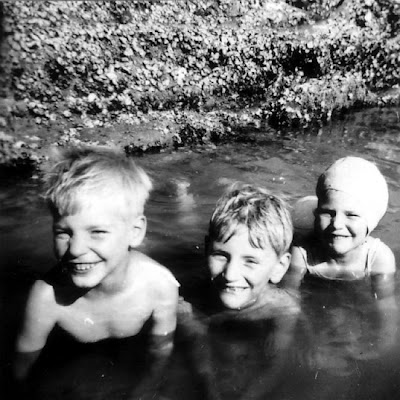 One or two notes: I have no recollection of having been sick. I remember the huge tin shed that was Mascot Airport in those days, I remember how blue the skies were, how hot the car was, and a man in uniform with shorts, but I do not remember being sick. I also remember going over the harbour bridge on our way to the boarding house which was our temporary accommodation.

I also remember going out in a car on a journey not mentioned here. I am sure it must have been Anzac day (but probably wasn't), and we went to the shops. When we got back to the car the plastic seats were hotter than the centre of the sun. Dad may not have had any shorts, but I certainly did.

And.. The boarding house we stayed in is the reason I do not eat (and indeed cannot eat anything that has been in contact with) pumpkin. On one of our first days they served mashed pumpkin (I assume cooked like mash potato) with an ice cream scoop - two perfectly formed balls of something radioactively orange that looked like it was yummy and exciting (i.e. a new ice cream flavour) that tasted like yuk. They also served curried sausages - fried sausages that had curry sauce (curry powder mix flavoured gravy) poured over them.

Luckily, it didn't put me off sausages.

The money thing is interesting: Australia had only just changed from £Sd to the Australian Dollar (14 February 1966), so money amounts can appear in any currency: Australian or British pounds or Australian dollars (but never all three).

We were sponsored immigrants to Australia as part of the "Bring out a Briton" campaign, and as such my parents had to pay £10 each towards their airfare - we three children flew for free. All Australian immigration records have been digitised and a searchable index put online and you can register an account and ask for a record to be made available to view online. My father did just that a couple of years ago for our family records and they make really interesting reading: when people comment about Susan and I moving, first to London then to France, and saying how brave we are, I look at what my parents managed, and think no... not really...

Really interesting to read how such a journey was done fifty years ago! Today going to Australia is normal, you can do it for holidays or to visit your family once a year, the world is smaller... and when you don't want to travel, you have internet to read about and see the photos...

Simon,
You haven't changed one bit - that devilish grin is still there from what I remember last year.
We write about our trips to France weekly on our blog, so keep us updated on your memories of growing up in OZ, won't you.
Leon
PS: Does Celestine need any more T-shirts?

loved reading about your parents journey.....can't imagine doing that back then with 3 kids.....whew...a real leap of faith

Why did you decide to move to France? It would be me, I would have moved back to Australia after
England, but of course, I don't know the whole story.

Katarina. So true - I have done the trip 8 times since 1995, which is scary when you think of it.

Leon. I was the well behaved charming one!

Melinda - I am with you on that.

Nadege - have you seen the weather?!!

Thanks so much for sharing this, its so interesting to read how things were 50 years ago. My mom tells a story of similar radioactive icecream scoops of mash pumpkin from boarding school.... must have been all the rage back in the day huh :)