Last year just before Christmas, Susan bought pain de mie. This is a sweeter than normal bread, with sugar added to the dough (but not as much as "normal" North American bread), and baked in an enclosed tin. This means that it is all mie (crumb) and no crust.

A week later, we still had most of the loaf left: though we are led to believe that many French children have it for breakfast, it just didn't appeal.

Therefore, it was just perfect for bread and butter pudding. 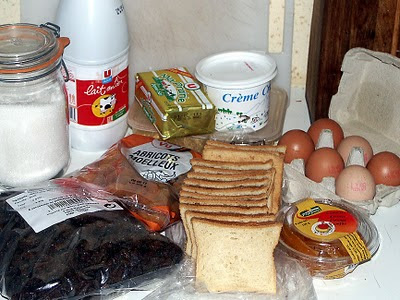 Ingredients:
Some bread (or brioche, or if you have it pannetone)
Sultanas - about 2 handsfull
Dried Apricots - about a handfull
Candied orange peel - 6 or 7 strips
a cup of milk
some cream (I used créme cru, but double cream will do)
4 eggs
butter
Sugar

Chop up the apricots and peel, and mix with the sultanas.
Butter a stoneware dish.
Butter the bread. It doesn't have to be perfect, you're not making sandwiches for the vicar's garden party.
Put a layer of bread in the dish, sprinkle with with dried fruit.
Repeat the process, but use all the fruit before you get to the top layer of bread.

Mix the eggs, milk, cream and sugar in a bowl, and pour over the top. 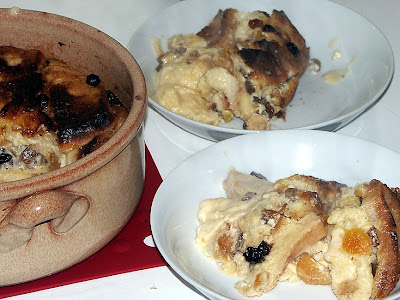 The basis for this recipe was Delia's. I don't do measuring, so either; I was lucky, measuring is overrated, or I have a gift. I also don't do nutmeg or zest, and unless it's soft and very orangy candied peel, neither am I much a fan of that. Still, Delia was a good departure point, so I am happy to acknowledge I departed...

This is one of my favourite puddings, thanks for reminding me. I wonder why I have not made one for ages? Diane

we did the same with Panettonne this year - lovely.
Used to be Aussie poor persons desert. Tell the rich people that!!!

Pudding day? Rice at Ken's and bread & butter at Susan's.

L&S: I never had it in Australia. It always strikes me as a quintessentially English pudding, and not associated with poverty, but well managed households.

CHM: I promise you there was no collusion. In fact, until I read your comment I didn't realise Ken had posted about rice pudding. BTW, the credit for the bread and butter pudding here goes to Simon, not me.

Congrats Simon! I wrongly assumed the recipe was Susan's. I love pudding, whether it's black, rice or bread and butter. They're all different. I'll try this recipe.