Today is the national day in Australia, but for many it won't be much of a party atmosphere. The government is talking about introducing a very controversial one off tax to help pay for the flood clean up. Billions have been lost through crops being ruined and mines (particularly coal) being inundated. The money to restore buildings and livelihoods must come from somewhere, and diverting funds from other projects is inevitable.

A typical Australian beach with soft pale sand and no crowds. 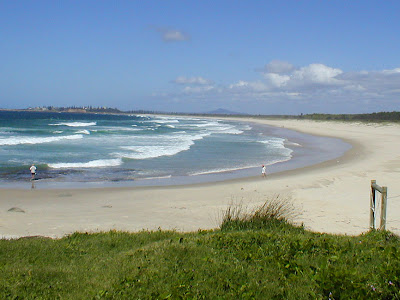 Nevertheless, Australians have a reputation for knuckling down and getting on with it, especially in rural areas. Whilst there is a certain amount of blame flinging going on at present, I hear from several of my friends that they have been greatly moved by the willingness of volunteers from areas less affected to pitch in and clean up the stinking muddy residue. Of course, the people who will never recover entirely are those who have lost loved ones, and those whose houses were engulfed are fairly traumatised, whether they are showing it or not.

This scene was immortalised by the Aboriginal painter Albert Namatjira
(the trees have seen better days). 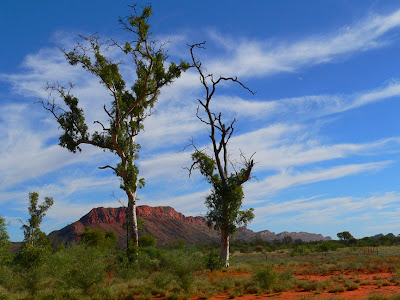 I was particularly struck by the captions on some photos in The Sentinel, the newspaper that serves the town my parents live in, and where I spent my teenage years. Here is a selection - the article was headed 'Flood devastation after wettest year on record':

No mail today...snakes or ducks are about the only things Wendy Pfeffer is likely to find in her letterbox. (The picture shows Wendy at a roadside mailbox, up to her waist in water, which stretches for many metres all around her.)

Self-mulching...Kevin and Vicki Bond's prizewinning garden at Pampas was just one of many inundated after Christmas. Three months ago the garden won the small homestead section of the Carnival of Flowers competition. (The picture shows some attractive small green weeping trees standing in a pond of dirty water and surrounded by a slurry of mud covered loose plant material dumped by the flood.)

Road closed - Perrier's Gully became a raging torrent on December 27. Cattle from the high school's agricultural farm were seen swimming, along with foxes to the safety of higher ground earlier in the day. The unrelenting force of the water took fences out with it. (The photo shows fast flowing water perhaps 100m across a gully that is normally dry.)

I'm sorry I can't show you the pictures, but the Sentinel is so small a concern that it doesn't even have a website. The paper says that the winter grain crop losses in southern Queensland are estimated to be around $200 million and it is too early to assess the damage to the summer crops, but about 50% have been flooded. Local farmers also pointed out that equipment has been seriously damaged, as well as the transport infrastructure of roads and rail. The local council estimate the road repair bill will hit $10 millon and farmers report that items such as rollers, hay bales and fuel tanks have been carried up to 4 km by the floodwaters. The government is holding seminars throughout the flooded districts to advise people on available assistance, farm financial counselling and community services.

Introduced to Australia thousands of years ago by the Aboriginals,
dingoes are now completely naturalised wild dogs. 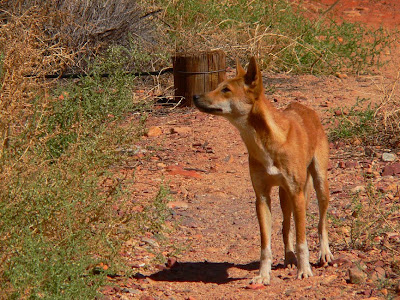 The total rainfall for the town was 1252 mm. That is 153 mm more than the previous wettest year and 434mm fell in December alone. Things were looking good until June - up till then they'd had just over the average rainfall with 430mm. The town has only had more than 1000mm five times in the past 124 years. The year before (2009) most dams and reservoirs in the area were perilously low - now every one is full to overflowing.

A different flood in a different Australian state.
The egrets are fishing on a flooded road. 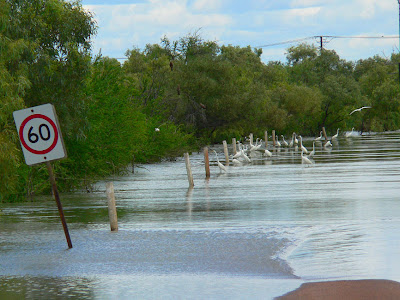 Fortunately, the town itself is on higher ground on the edge of a vast floodplain of deep fertile aluvial soil given over mainly to broadacre farming and more recently, coal mining. The town was completely cut off, but my parents and other residents were in no danger at home. It was one of the few towns on the Darling Downs not to be completely inundated.

Most of the figures quoted above are for an area very similar to our own département of Indre et Loire. The main (only) city is Toowoomba, about the same population as Tours, the main occupations are rural, the town my parents live in is about the same population as Preuilly and situated about the same distance from the city. In the weeks just prior to this flood there was serious flooding further north and similtaneously the area to the east, including the state capital, Brisbane, flooded. The European news was reporting the event as covering the equivalent of France and Germany combined, but in Australian terms, it was at first a single state in the north, Queensland. Now the southern states are copping it. We thought the fires last year were bad, but this flood has turned into the worst natural disaster Australia has ever experienced (in economic terms if nothing else).

No swimming - if it's dry it's just sand,
if it's wet it's a raging torrent. 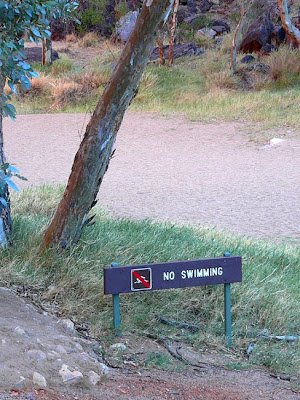 I am conscious though, that there are some small mercies. Floods occur in the summer in Queensland. It may not be the hottest summer but still warm enough for people to be out and about in shorts and tee-shirts. In Europe they occur in the middle of winter, like Xynthia. In Pakistan, 6 months after their devastion, many people are still living in refugee camps in the cold mountainous regions. It may be summer too in Brazil, but the mud in Queensland was nothing to the deluge they experienced. These events come so suddenly and so shockingly, disrupting our lives without warning, but at least in the wealthy nations we can provide the basics for all of our citizens given only a few weeks.

Our blogger friend Thirsty Kirstie, who has had rather an exciting time of it herself, is proposing that, since the year has begun so badly, we just ditch January 2011 and start again. She would like everyone to 'join' her at 18:00 on January 30, no matter where you are or what you are doing and have a drink to the new new year. Yippee - that means popping open a nice bottle of Vouvray at 9:00 on Sunday for us.

PS The Sentinel also had a small piece on my mother's 80th birthday party, brilliantly organised as a surprise by my father, who thought of everything. Except... perhaps they should have told my sister and I about their third daughter. It was in the paper, so it must be true.
Posted by Susan at 09:00

When you see the ragging fury of nature, you wonder why people are fighting each other instead of offering a helping hand to all.

Well said,chm. And how funny that the local paper gave your parents a third child. If I calculated correctly, your town had over 50 inches of rain - incredible. I had to put that in context to grasp it and checked the norm for Los Angeles = 14 inches per annum, for Phoenix 6 or 7.

If everybody would follow the recommendations of CHM, the world would be a better place.
In the Sierra Club magazine, a few months ago, there was a very interesting article about pollution, drought and the coal mines of Australia.

Nadège: It's an interesting combination of subjects. Coal is mined in many places in Queensland, but only in the last 10 years in the area around my parents. There were no mines when Simon and I lived there. It's turned the place into a bit of a boom town. A variety of mining techniques are used, from open cut to gas injection. It has been extremely controversial, mainly because it destroys top quality farmland, but also because it's 'old technology'. I'm hoping to learn more about the subject soon, as an old friend is Assoc. Prof. of Sustainable Mining at UQ - but his house was flooded to 1.8m above the first (NA second) floor, so I am holding off asking him for some background info on the mining.

I just can't think of anything
worse than having one's house
filled with mud and water. The
smell must last forever.

I thought of you today when I
saw an article in the NY Times
about Nabokov and blue
butterflies. Sorry, I don't
know how to send you a direct
link, but I just tried Googling
"Nabokov theory on Polyommatus
blue butterflies" and the link
pops up, second one. You might
find it interesting.

Sheila: Many thanks! I knew there has recently been a lot of work on this group, but didn't know of the Nabakov connection. I've downloaded the Royal Society paper to read later. Nice article in the NYT.