In March 1967 my parents emigrated from London to Sydney, Australia. My Father (Ernie) had applied for and received assisted passage as his was a trade that was in demand in Australia. With my Mum (Grace), myself, (age 6¾) my sister Elizabeth (4½) and brother Jonathan (almost 3) we flew on a BOAC 707 from Heathrow to Sydney, in a trip that lasted 3 days. 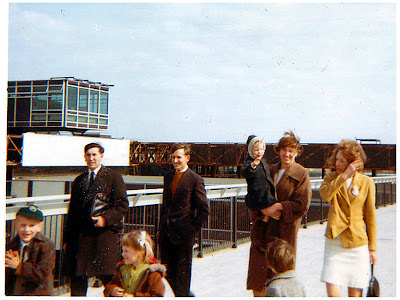 As we were the first of my Mother's family to fly, she kept a diary on the menu booklet that airlines used to supply in those long gone days and sent it to her parents soon after we arrived in Australia. I am not sure when it came into my posession but I am fascinated by it, and hope that you get something out of it too.

I have scanned the document as well as transcribing it, but the writing does rather scoot from one page to another then back again. To keep things authentic I haven't tried to reorganise the photos, but I have transcribed the writing into the order in which it occurred. 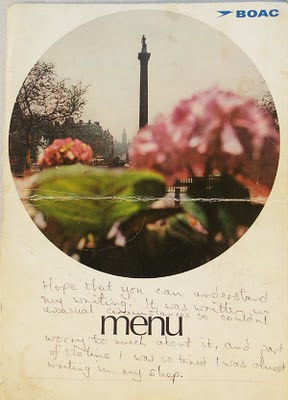 Hope that you can understand my writing. it was written in unusual circumstances so couldn't worry too much about it, and part of the time I was almost writing in my sleep.

Tried to get over the upset of saying "goodbye" by opening presents. The children helped so we can't sort out who bought what but they are all wonderful presents.

Hope that you can understand all that I have written, I thought that if I wrote as it happened you would get a better idea of the journey etc. Elizabeth just found her slippers (from Elsie I think) so we are both wearing the same slippers with our shoes tucked under the seats. With all the books etc. that you gave the children plus those that we bought - plus those that the air hostess gave them we have ½ a ton of stuff but they don't seem to mind (the airline I mean). 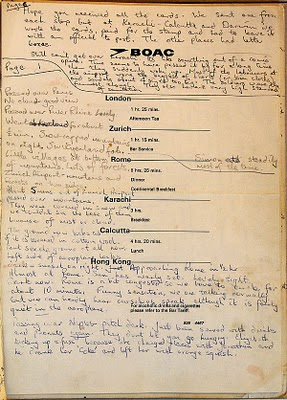 About 5 minutes out of Zurich airport passed over mountains. They were covered in snow and we couldn't see the base of them because of mist and cloud. The ground now looks as if it is covered in cotton wool. Can't see the ground at all now. Left side of aeroplane looks dark - sunset on right. Approaching Rome in ½ hour

Almost at Rome. Sun has nearly set. Lovely sight. Dark now. Rome is congested so we have to circle for about 10 minutes Funny sensation , we are talking normally but we can hardly hear ourselves think although it is fairly quiet in the aeroplane.

Passing over Naples - pitch dark. Just been served with drinks and peanuts again. They don’t let you get hungry. Elizabeth kicking up a fuss, because she changed places with Jonathan and he drank her 'coke' and left her with orange squash. 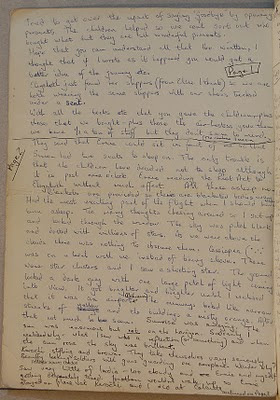 They said that Ernie could sit in front of me so that Simon had two seats to sleep on. The only trouble is that the children have decided not to sleep although it is past nine o'clock. Ernie reading the Riot Act to Elizabeth without much effect. All three asleep now. Blankets are provided so there are blanketed bodies every where.

Had the most exciting part of the flight when I should have been asleep. Too many thoughts chasing around so I sat up and looked through the window. The sky was pitch black and dotted with millions of stars. As we were above the clouds there was nothing to obscure them. Cassiopea was on a level with me instead of being above. There were star clusters and I saw a shooting star. The ground looked a dark grey with a large patch of light coming in to view. It got brighter and brighter until I realised it was an airport (Bahrain). The runways looked like narrow streaks of yellow and the buildings a misty orange. After that not much to be seen. Sunrise was amazing. The sun was enormous but not on the horizon. Suddenly I realised why - what I saw was a reflection (or something) and when the sun rose the sky was brilliant.

Karachi stifling and brown. They take themselves very seriously. Scruffy looking soldiers with guns guarding one aeroplane. Wonder why? Saw very little of India - too cloudy and Ernie and myself deperately tired. Jonathan wouldn't wake up so Ernie stayed on the plane at Karachi and I did at Calcutta.

Just as well, the temperature was 84°F.

I remember parts of the trip:
Going to the airport with my grandparents, and my father buying me my first ever Toblerone at Zurich Airport. The soldiers at Karachi (and the impossible heat!) and a Crackerjack book (which I still have) with activities. I wore a woollen suit with shorts (and a cap), so no wonder I remember the heat in Karachi. Or was it Calcutta, which Mum doesn't mention?

Fascinating! It's almost a blog 'avant la lettre'. Now we know where you got your writing talent!

Nice post simon - looking forward to the next one soon I hope.
I went to school with many of the immigrants that came here earlier in the 50s. You might be aware of them in that era being called 10 pound Poms. Something you might like to explain to your readers.
I still have a close mate from those days.
Leon

For those who don't know the expression, emigration to Australia was subsidised for people with trades that were required. My Father was a printer and as Australia was short of printers, the government paid most of the fares for the whole family. We flew because there was 3 young children, but most people had a 6 week boat trip.

Wonderful post and a great souvenir to have kept. And what a long, long way you traveled.

I had forgotten all about BOAC. As a child, I used to see their planes at the Philadelphia Airport. This also brings back memories of more civilized air travel, when they treated you in coach better than they do in first today. Even in the 70s, they had the menus and real cutlery in coach on international flights. How things have changed: I was recently on a US Airways flight that charged for water and coffee...

Simon, you must have both UK and Oz citizenship?

This was the trip of a life time. I am glad you have nice memories and souvenirs of it.
I remember BOAC at Orly airport. I miss the good old days, but maybe in 10 or 20 years, we will remember 2011 as the "good old days".

Really interesting Simon, and I can only imagine how excited you children were. Your parents must have also been very apprehensive about exactly what was ahead.

Crackerjack - now that does bring back memories.

Thank goodness they didn't give you the complete Crackerjack kit with cabbages and so on (or had they stopped doing that by your time?)

Diogenes - I have both, with an ambition for a third

Autolycus. I have read about cabbages... Vegetable based kids entertainmeny - those were the days...

Nice work Simon. Your Mum was quite the narrator. As one who met you all about a dozen years later it’s nice to hear your backstory, although I suspect we’ll get a better perspective from Grace than anything I may have gotten from you boys over a glass or two. 😉 Look forward to the next instalment.