The château at Boussay dates from the 12-13th centuries and the 17-18th centuries and is made of tuffeau (soft limestone) like most local buildings. Owned by the Menou family, it was designated a fortified house in 1533, surrounded by a moat and entered via a drawbridge. In those days there was a distinction between a château (castle) and a fortified house, often implying the occupants were lesser nobility or newly ennobled.

The front of the château, with the two old towers. 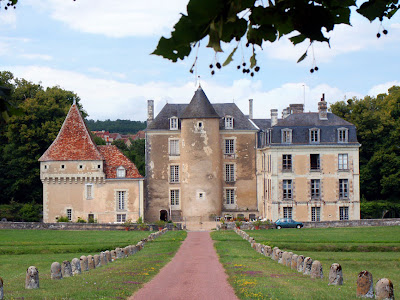 At this time the château comprised four blocks of living quarters, arranged around a vast internal yard. The only survivors from this maison forte are two towers, one round, one square. By the 18th century the southern wing had disappeared and part of the western wing.

Apparently, in one of the rooms, there is an 'English fireplace', salvaged from the nearby ruined hamlet of Varton. The name of this hamlet is a corruption of 'war town', the name given to it by English troops during the Hundred Years War. I have heard a number of different versions of the story of the English at Varton and have yet to get to the bottom of it. We drove through the area recently, and Varton appears to have been turned into a recreational four-wheel drive centre and campground. 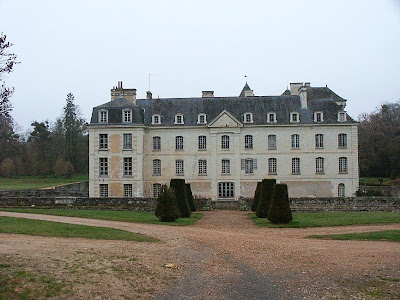 Very unusually, the château has never been put up for sale since 1342 and is still occupied by descendents of the Menou family. At the time of the maison forte, the family also added a grand memorial chapel to the local church and generations of Menous are buried there. With such a long association with the village, the family and the château have been the hub around which the community has revolved.

One of the most remarkable members of the family was the 18th century Jacques-François Menou. Like François d'Harambure from Preuilly, he was the local representative for the nobility at the Estates General of Versailles in 1789. I think the family came to regard him as very much the black sheep, despite his being responsible for the introduction of a single flag to be used by the Navy, and the precursor for the current national flag. A friend of Napoleon Bonaparte's, he succeeded General Kléber in Egypt after the general was assassinated. Jacques-François took rather well to life in Egypt, adopting native dress, marrying a wealthy Egyptian woman and even converting to Islam. Napoleon and the Menou family were distinctly unimpressed, but he clearly enjoyed the exotic lifestyle.

Susan - an interesting historical blog. I enjoy these posts.
All food for our future travels.

The front of the chateau is interesting with its three distint periods, but I like the east facade best. Overall it's a bit like Hampton Court with all the different styles from different periods.

Diogenes: It always reminds me of Castle Ward in Northern Ireland, built in two completely different styles front and back because the couple who constructed it couldn't agree.

Hi Susan,
Out of curiosity, I just googled Castle Ward. The contrast between the front and the back facades is absolutely striking. As much as the front facade is stately and well proportioned, the back is plain ugly. It's like a dream turned nightmare. LOL

There are many photos of the front facade and just one or two of the back. For a reason!

I too checked out Castle Ward. Well, the front's nice...LOL

CHM & Diogenes: LOL. I think you are being a bit harsh on poor old CW. The Gothic side would have been the height of fashion when constructed.

Very interesting. Doing genealogy I have found that one ancestral line (known as Menaugh or Menough in America) came from France...they were French Huguenots. This line went to Ireland, Scotland (where the name became ME Naugh and is so listed in early American censuses) and then to Pennsylvania, Virginia, Kentucky then to Indiana (my ancestors and where I live today). Related to the French Menou family...who knows. People love being connected to well known ancient ancestors. Lawrence Terry lterryindy@hotmail.com