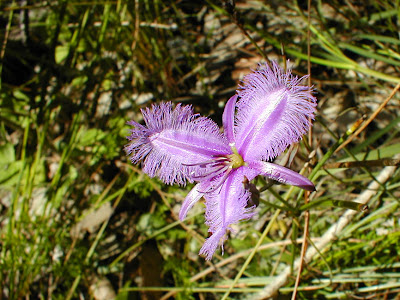 The equally aptly named Flannel Flowers which look just
like they are cut from white felt. 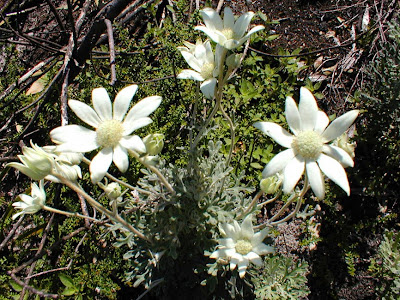 Christmas Bells, behind the dunes at the coast. 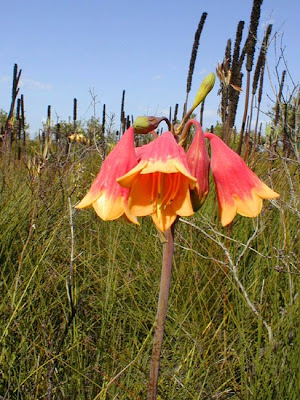 One of the banksia species, also at the coast. 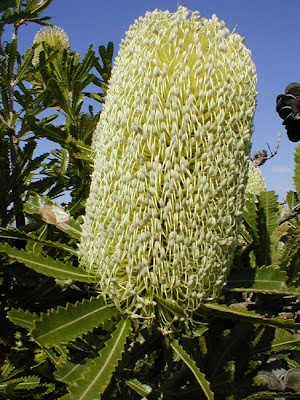 You have no doubt heard about the floods in Queensland and NSW in the middle of January. One of our bloggy friends Kirstie had such a time of January (their house was flooded once and isolated by floodwaters twice) she has decided to start the year all over again, having a New Years Eve party at 18.00 Queensland time. We have decided to join her, so we have invited some friends over and will be having a glass or two of something soothing at exactly the moment this is posted: 18.00 Queensland time, or as it is known around here, breakfast time. We will be asking for donations which we will give to the flood relief appeal.

We will be experimenting with streaming video and audio from the party so you can join in. It may be amazing, but if it isn't we may stop the stream and just let you imagine what japes we are up to. The stream will be here.

Cheers, a new NEW YEAR is a good idea under the circumstances.

Long over due is a thank you for your Cherry Clafoutis recipe, it is by far the best I have tried. I still have a drawer full of frozen cherries in the freezer and they work like a dream with your recipe. Thanks so much Diane

Happy nouveau New Year. The flowers are remarkable, unlike any I've seen. Christmas Bells related to Amartyllis? And the incredible banksia looks like it could be related to a yucca species?

I agree with Diogenes, the flowers are remarkable. The Flannel Flowers look very much like Edelweiss (Leontopodium Alpinum), the Alpine flower. Are they in any way related?

Do the Christmas Bells belong to the Lily family.

The Banksia reminds me of a huge fairy duster.

Thank you very much for sharing the flowers and happy new year!

The flowers are simply beautiful, thanks. I looked at your pictures of the streaming--after a couple of seconds, I got an ad for Lysol, but am hoping that was not an editorial comment on the part of the internet.