Visiting Ken and Walt on Tuesday reminded us that although we took a photograph a couple of years ago, we have never blogged about the memorial on the bridge between Noyers and Saint-Aignan. 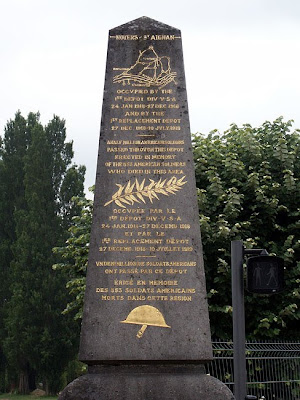 During World War One there was a substantial American replacement troop camp in Noyers-sur-Cher. The memorial says:

The camp, with its rows and rows of pyramid shaped tents, was like a town in its own right, with a cinema, shops and repair workshops, a dance hall, basketball court, hospital and cemetery. It was American policy not to send newly arrived troops straight to the front, so the Sammies, as they were known, were stationed here so they could aclimatise, then be quickly and easily moved up to the north-east of France to the front line as required. Likewise, when the War ended, the camp was used as a mustering point while troops waited to be repatriated to the USA.

One of the most important facilities on site was Camp Hospital 26, situated opposite the current cemetery. Its own cemetery was on one side of the hospital grounds. Officially, it could hold 1500 patients, but in times of emergency, took up to 2200, dealing with medical, surgical and dental cases. As such, it was an exceptionally large facility of its kind and had several specialist clinics (for those banes of military life, venereal disease and flat feet). The usual standard for a camp hospital was 300 beds.

At the beginning of American involvement in the War there were 73 000 American hospital beds in France, for a force of 300 000 men, provided by a combination of new build and annexation of existing French facilities, with the co-operation and agreement of the French government. Camp Hospital 26 seems to have been a mixture of new construction, annexed existing French hospitals and other existing buildings. Six months later there was a total of 238 917 hospital beds, of which 25 232 were in Camp Hospitals. Towards the end of the war, partly because of the outbreak of influenza, which caused the bed occupancy to nearly double, the Americans were negotiating for the provision of 600 000 beds.

Camp Hospitals were intermediate establishments, between Field Hospitals and Base Hospitals. They were usually associated with a Convalescent Camp. The one at Noyers-sur-Cher was also located in what was known as the Intermediate Zone, that is, between the Front Line Zone (north of Orléans) and the Base Zone (west of Tours).