Part two of the diary my mother kept on the days we emigrated to Australia in 1967. Part one is here.

Difficult to write - so tired. Still enjoying it though. Being in a large aeroplane like being in a self contained world. Only trouble is that you stay in the same clothes all the time and you can't wash properly - the toilets have a tiny basin in them but no room to turn round. Every few hours the Stewardess brings small towels soaked in cologne. We all liked that. 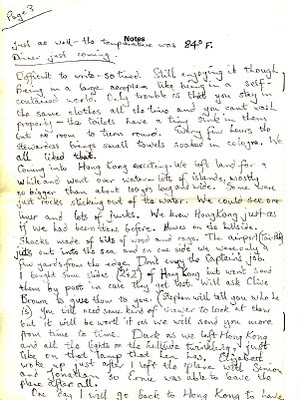 Coming into Hong Kong exciting. We left land for a while and went over water - lots of islands, mostly no bigger than 100 yds long and wide. Some were just rocks sticking out of the water. We could see one liner and lots of junks. We knew Hong Kong just as if we had been there before. Houses on the hillside. Shacks made of bits of wood and rags. The airport (Tai-Pak) juts out into the sea and on one side we were only a few yards from the edge. Don't envy the captain's job.

I bought some slides 2"x2" of Hong Kong but won't send them by post in case they get lost... You will need some sort of viewer to look at them but it will be worth it as we will send you more from time to time. Dark as we left Hong Kong and all the lights on the hillside were twinkling, just like the lamp Len has. Elizabeth woke up just after I left the plane with Simon and Jonathan, so Ernie was able to leave the plane after all.

One day I will go back to Hong Kong to have a good look around. 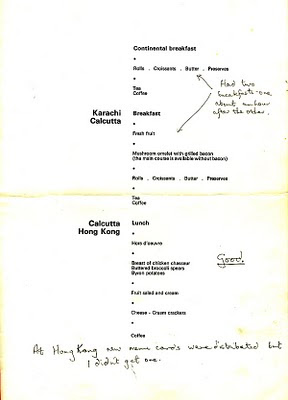 At Hong Kong new menu cards were distributed but I didn't get one.

Arrived at Darwin on time 3.10am temperature 84F. Children full of beans even at that unearthly hour. Ours chasing around but all the other kids looking travel weary. About 20 kids on plane and only 1 sick.

Two tiny babies so they have Carrie-cots on special table at front of plane near 1st class part. Children slept part of time from Darwin to Sydney. This adoptive country of ours sure is big. We have been over desert and scrubland - now we are over mountains and nearing Sydney. Simon still asleep. 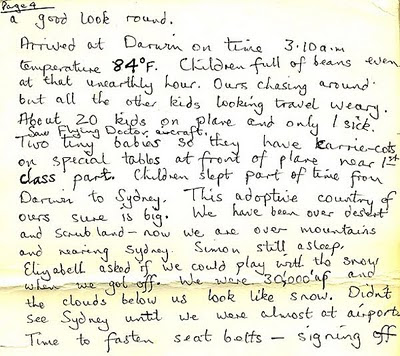 Elizabeth asked if we could play with the snow when we got off. We were at 30,000 feet and the clouds looked like snow. Didn't see Sydney until we were almost at airport.

To be continued - Mum continued writing her impresions and experiences for the first few days were were in Australia, and they make interesting reading. However, as usual, she managed to miss out all the most important bits:

We were flying in the days well before interactive maps in airplanes, so we really didn't have much to go on except the airline map book, which reduced everything to straight lines. This meant that between Calcutta and Hong Kong the map showed us flying over Vietnam. I was glued to the window, just in case I managed to see a warplane being shot down. 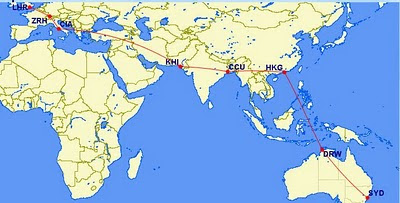 We were at Hong Kong airport for 70 billion lifetimes (or maybe an hour or two) waiting for the plane to Sydney. We arrived in daylight and left in darkness. The comments about "knowing" Hong Kong probably come from postcards my Uncle Frank (who had been at sea) had sent home.

Darwin airport was absolutely heaving with Australian soldiers on their way to/from Vietnam. I had a can of Coke, and sometimes even now if I have a can of coke the taste will be exactly the same as I remember and take me back to Darwin at 3.00am.

Having flown to France, having flown to Melbourne now 8 times, I'm with you on this trip.
Either way, it's always worth it, despite the time.
Really enjoying your adventure. Hoping you post your settling time, experiences at school and the time you returned to the UK.

Happy new, new year! (I just read Ken's blog).
It must have been hard on your parents to settle in their new country with the children. Very often when I am in the wilderness, I think of the pioneers and all the hardship they had to endure. Brave people!

Another wonderful post. I am as usual amazed at the food on the the airline menus! And I did not know that Australia sent soldiers to Vietnam.

Leon. Don't remember much about school.

Nadege It's so much easier now - even 20 years ago once you left home you just didn't get news, and 6things like telephone calls were so expensive - now they are ridiculously cheap

I understand your mother's comment about "knowing" Hong Kong on first sight. There are some places where the photos are so iconic that you feel as if you've been there before. I had the same reaction first time in HK.

Having flown London/Sydney many times, its hard to imagine what a long, long jaunt this must have been. Wonder how long (days) it too back then? So interesting.