The Collegiate Church of Saint Mélaine

High above the town of Preuilly-sur-Claise, within the medieval chateau walls, and now the private property of the current chateau owners*, sits the ruined collegiate church of Saint Mélaine. Built of tuffeau (soft limestone) in the 12th century, it qualifies as a collegiate church thanks to the honorary and transferrable title of Canon accorded to the Barons of Preuilly. 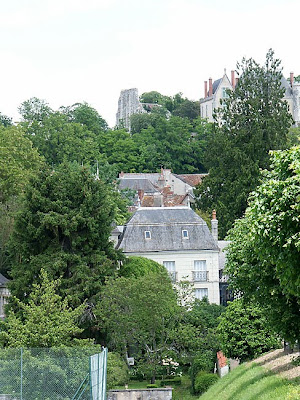 Built to replace an earlier (9th century) chapel, at the time of its construction it was richly decorated, but has had rather a rollercoaster time of it subsequently. Partially destroyed in the 16th century by the Protestants, it was reconstructed by César de Vendôme. César, the son of the good king Henri IV and his great love, Gabrielle d'Estrées, was Baron of Preuilly. A couple of centuries later, the church was laid waste again, during the Revolution. The only existing part of the 12th century building is the bell porch sheltering the entrance. Until the early 20th century this porch also sheltered a collection of remarkable capitals, but they were sold in 1930 (we have heard it was to pay for the restoration of the chateau) and now reside in the Cleveland Museum of Art's archive store in the United States. 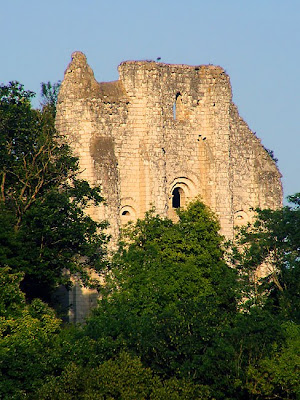 There is some graffiti which is probably the work of a cleric in the 12th century. It shows a bishop with an old fashioned mitre giving the benediction, the cross turned towards the interior of the church. The initial 'M' indicates that this represents Saint Mélaine himself. The tomb of Mélaine, who was Bishop of Rennes in Brittany at the time of Clovis, was brought to Preuilly for safekeeping at the time of the Norman invasions (the Normans appropriated territory in all directions, not just England). This holy tomb was made the object of important pilgrimages on the part of loyal Bretons for three and a half centuries.

You've given us another reason to go to Cleveland (in addition to the Rock and Roll Hall of Fame).

I've always been very sad that the US doesn't have any good old ruins etc.

If you've a suspicion that it's their garage.... let's hope they worship the DS