July was a busy month: really busy. The roofers were still here, and we were working on the sas d'entrée. Later in the month we had visitors: first my brother and sister and their respective spouses, then my uncle Geoff and aunt Pat. A month, however, most notable for my birthday, celebrated in style.

In August we started work in the attic, first building a new floor, and then going on to insulate the whole roof space. I also managed to finally sort the mysteries of Célestine's headlight switch, whilst Susan filled the kitchen with jam. 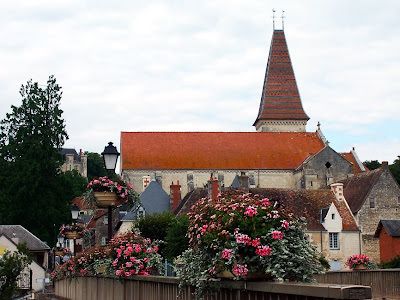 Work on the attic continued into September. Our alternate life was busy as well, and we visited the chateaux of Chauvigny, Chenonceau, Chaumont, Cheverny, Loches, Azay-le-Rideau, and Montpoupon, some of them more than once.

October was a bit of an odd month: work on the house continued (this time in the office), and we took some visitors on tours, but all the while the weather couldn't make its mind up - a recurring theme this year. Our poster campaign got underway, to really good response (thank you). Meanwhile, the rest of France suffered with a series of strikes; which we noticed, but they didn't really affect us.

The Bridge over the Cher at Montrichard, on
an October day that also bought us teeming rain 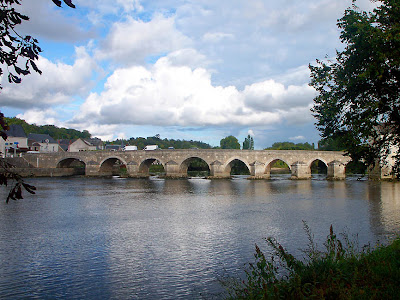 November started with some serious dust and ended with... oh. Dust. In between times we had a friend from Australia (and some of her friends) visit, which was nice, and the cranes flew over on their way south (which was nice, but a sign of colder weather).

Which brings us to where we are now. December. It has been cold, and we had plenty of snow at the start of the month. We started work on the kitchen, finishing the insulation of the house in the process. Last year we has one room that was warm, and two rooms which were tolerable as long as you were wearing gloves and a hat. This winter we can use the whole house (but not the graineterie) wearing sensible level of clothing.

Our circle of friends in and around Preuilly has widened, and we are particularly grateful for the advice and energy provided by Stéphane. Without him, we would not have got nearly as far with the house. Susan.

What a year, with some amazing numbers! Thank you for sharing it with us.

I have enjoyed reading about it all in your blog, and look forward to more of the same.
very best wishes for a peaceful, happy and healthy 2011.

You must feel that you're "over the hump" renovating the house. You've accomplished a lot this year. And what are those flowering plants in the first picture? Some kind of trailing geranium? I don't know that I've seen that variety in the nursuries here.

I think you are both incredibly brave. I have "improved" 3 houses and I just can't believe what you are going through. Yes, you are very lucky to have Stephane, but
the honor goes to you because you are living in the house while the renovations are taking place.
I hope 2011 is very productive and
prosperous for both of you!

thankyou for all the entertainment very good, meilleurs voeux 2011

Love following your progress since we discovered your site in 2009 - so glad you used the word 'truffle' in one of your blogs :-)
As a serial renovator of 6 houses in 13 years (why don't people believe us when we say this is the last one...?) I truly sympathise and commend your efforts. You will look back one day from the comfort of a beautiful house and wonder whether you really lived amongst all the dust and grime, or was it just a dream...?

Enjoy the next year with further adventures in house renovation and Celestinial travelling through France.

Thank you all and our best wishes to everyone.