January was taken up with staying out of the cold, occasionally venturing into the garden to work on the apéro terrasse. We had just returned from Australia, so the change in weather (even though we knew what to expect) was a bit of a shock. We also went to Paris to Retromobile, which was fun and will be an annual event in our calendar.

In February, winter went, then came back again - twice. We started thinking seriously about bathrooms: where they would go and how they would be equipped, even to the extent of starting to shop for fittings and furniture. The big news, of course, was Xynthia. We survived her without too much trauma (and no damage).

This photo typifies the first three months of 2010 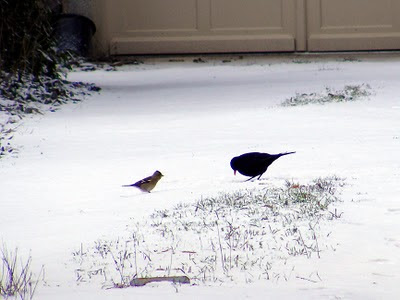 March's exciting event was the arrival of the cranes. It was the first time we had ever seen them, and like everyone else we took them to be a sign of spring arriving. A week later, winter arrived again with some more snow. We started buying the materiel for framing and insulation for the bedroom and bathroom walls, an ongoing event throught the year.

April. This was the month we started working with our business. At home, we commenced the rennovations with a vengence, starting with the guest bedroom and bathroom. At the same time, the stonemasons were here, replacing the stonework around the back door, and raising the lintel of the laundry door so I could walk (rather than crawl) in there. We also met Jim Budd, and dined at le Detour for the first time. Phew!

In May we celebrated 12 months living in France, work continued on the house, we had frost after the Saints des Glace, and plenty of orchids in the orchard. We spent quite a lot of time in Célestine, both with paying guests, and just for the sheer joy of it.

And this photo typifies the rest of the year:
The dust, the dirt, the stuff all over the place! 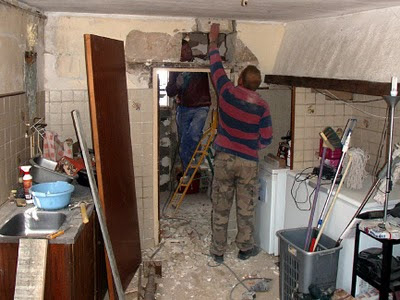 June was exciting. Just one word: bathroom. With working shower and hot water and everything (I know - I have exceeded the self imposed limit of one word, but it was that exciting). Later in the month the roofers arrived to re-roof the bits that weren't done in 2007.

All that in six months? No wonder I am tired!

Extra special happy birthday wishes to my mother, who is 80 today. She and my father are being treated to a few days at O'Reilly's Rainforest Guesthouse with my sister and brother-in-law. Sorry I can't be there. A picture of them all from Christmas 2009 is here. Susan.
Posted by Simon at 09:00

Simon,
Work well done!
Susan,
Please give my best birthday wishes to your mother. I wish I were her age again ! LOL And best regards to your father.

As a regular visitor I want to thank you for an interesting and informative blog and congratulate you on the progress made this year. I wish you both a happy new year.

Happy New Year to you both.

O'Reilly's looks like a place I'd love to stay at. I would totally do the tree walk. Noted the tree ferns in their intro.

I don't know if I miss Australia or France the most right now. Happy birthday to your mother, and a wonderful, prosperous new year to both of you!

Diogenes: our family has stayed at O'Reilly's a number of times over the years. We love it.

Thank you everyone for your good wishes.