A few months ago I put the word out amongst my gardening friends that I wanted to create a fernery at the back of the house, around the coin d'apéro. I asked if they had any little ferns that were surplus to requirements that I could use to augment the half dozen ferns I currently had dotted about the front courtyard. Thanks to Jill, Louisa and an unknown client of our professional gardener friend Nicole (whose husband Alex made the terrace) I received a lovely selection of hardy native ferns, and they've been settling in for a while now. To my surprise my friend Jean-Pierre, the retired director of the Parc Floral de Paris and an acknowledged fern fancier, said he didn't have any ferns in his garden. However, he had ordered one of each variety supplied by a nurseryman mate, and they were a gift!

A bucket full of ferns from J-P. 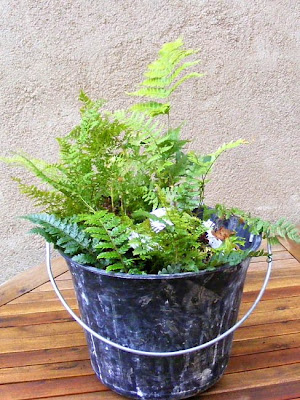 A few days before Christmas he arrived in town to stay with his mother, bringing the ferns. I discovered he'd actually ordered two of each, and was planning a fernery of his own in the courtyard of his mother's house. We sat at her kitchen table and carefully labelled them all and split some that had arrived as single plants. Then I brought my share home and potted them up in the sleet. They are all perfectly hardy, so they should be fine. There are 13 of them, all different.

The new ferns, potted up. 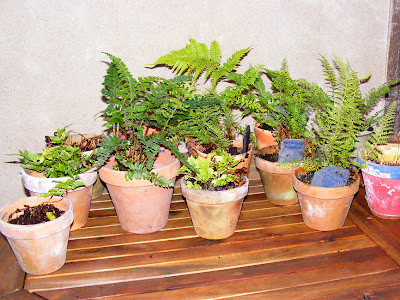 They range from species that will get really tall like the Royal Fern, to low growing spreaders like Fortunes Holly Fern. Many are native to France, like the Scaly Male Fern and the Soft Shield Fern. One, the Sensitive Fern, is North American and another, the Mother Shield Fern, is Australian. J-P warned me that the Sensitive Fern will need a lot of water, and the Mother Shield Fern will spread quickly and widely. One of them rejoices in the scientific name of Matteuccia struthiopteris (apparently it's named after an Italian phycisist and an ostrich wing...)

Part of the fernery, before the new additions. 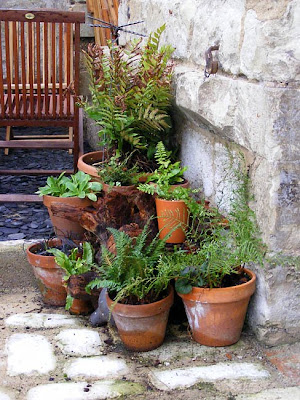 Much of the garden at the back of the house gets no sun, or very little. The ferns should thrive here, and watering them should not be a problem. The next big challenge is planting out the section of the garden that does get sun, and where the soil is mostly clay. In the summer it is baking hot and dry, and in the winter, cold and wet. Nothing I've planted so far has been a great success. Ideas please?!

Ferns are some of my favorite plants. As you say I am a fern nerd! In my small garden in Paris, I have a fern that is at least sixty years old. It has survived all kinds of neglect and weather conditions. It looks like a Royal Fern. I noticed last year I have a small "rejeton" that is a small baby, growing far away from the mother fern. It grows typically between two large stones where it is impossible to dig it up.

I love ferns too. Not good for my climate as they need a lot of water!
I subscribe to a blog http://wildsuburbia.blogspot.com/
written by Barbara (Southern California native plant gardener).
It won't help you for France, but basically, you should plant whatever grows wild in your area.

The following will survive the summer sun and winter wet and clay soil. I've grown all of these myself (in similar conditions) and they are all cold tolerant as well:

Also roses might work. Will you get an Australian Tree fern for your garden? Can they be found in the nurseries in France?

I wonder whether ornamental grasses ( planted en masse) will do well in that sunny part. The best thing -they are low maintenance and so far I have been successful since I have clay soil and it can get very hot in Summer in montreal.

Nadège: even some of the natives I tried keeled over in the dry. I do have a load of native box cuttings I am hoping will strike though.

Diogenes: a couple of good suggestions there. The Tecomas will be too rampant, but they would certainly grow. I'll try plumbago for sure, but not lantana (it's classified as a noxious weed where I come from so it is difficult to look kindly upon it!) No need to resort to Japanese Boxwood either, as the European version is native to here. I have a rose cutting that came from a nearby chateau so might put that in. I don't think I will get a tree fern. They are all taken from the wild, supposedly under licence, but it seems a bit dodgy to me. They are also very expensive.

Beaver: very good suggestion if I can get the right species. I like grasses combined with irises, so I could bring a load of irises up from the orchard to go with them.

I had no idea that the tree ferns are taken from the wild. They grow well in California, and get quite large, but they are tough to grow in Arizona.

Susan,
The Lantanas need winter protection and like full sun. But once established grow well and are, to my mind, some of the most attractive plants, especially the variety planted in places like Majorca [that has the blooms that run from yellow, through orange to red]. Another you could try is Verbena bonariensis... not an annual as listed! Harlow Carr have some plants that are many years old. It also seeds freely, so you'll have some to give away and others to replace losses. Vervain grows well here so bonariensis should do equally well.

Diogenes: most are taken under licence from landscapes that are being ripped apart anyway (eg road making) but they are also frequently stolen from nature reserves.

Tim: got V. bonariensis in a pot at the moment. It will look great with grasses and irises.

Thanks to all - I feel a great garden design coming on :-)