A House on Clock Street

This 19th century tuffeau house on the corner of rue de l'Horloge and rue des Douves is in the so-called 'Preuilly style' created by the architect Créchet around 1850. The rather grandiose style here is demonstrated by the use of fluted pilasters topped by Greek capitals. Before the reworking of the facade by the architect, this property was the Hôtel de l'Image-de-Notre-Dame (or as it was known from 1793 – the Hôtel de l'Image). I assume the name change was a response to Revolutionary ideas on religion, and possibly because the original name was just a bit of a mouthful. There is still a Hôtel de l'Image in Preuilly, but it is no longer in this building. It is now run by our friends the Chedozeau family from a building on Place des Halles. 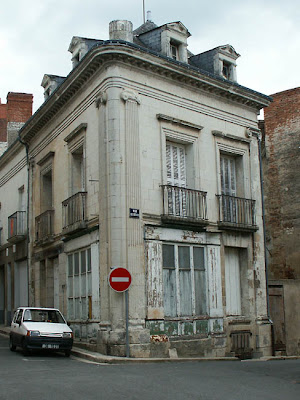 In 1920 the house was Henry Baamonde's bicycle shop. He hung the newest bicycles up high so that they were all the more tempting for the small boys that loitered around the shop. According to Roger Lezeau, who was one of those small boys, Monsieur Baamonde reigned there amongst the tyres smelling of rubber which gave the place a very particular ambiance. The brands sold included Délecta, JB Louvet, Sutter and Alcyon. The bicycle repair workshop was in a building opposite and the family lived above the shop – Monsieur Baamonde, originally from Spain, his pretty brunette wife from Charnizay and two sets of twins, two boys, two girls. Unusually for the time, Madame Baamonde had also given birth to triplets, but sadly they did not survive.

The slightly odd cylindrical chimney on the corner of the building was once higher, and must have had the top few courses removed in relatively recent times. Le Patrimoine des communes d'Indre-et-Loire shows it with its chimney intact in about 2001. 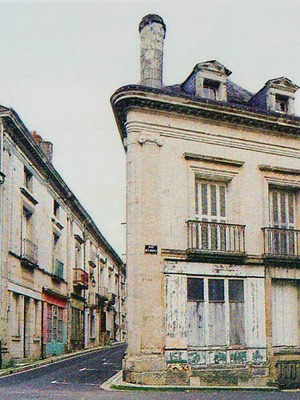 At some later stage in the 20th century the maison presumably became a plumber's business premises, because the wooden window surrounds say chauffage in peeling paint. The horloge (clock) that the street is named after was attached to the medieval gateway in the town wall, which ran close to the house and prevented anything bigger than a donkey using the street. It was demolished in the 1850s.

It's a beautiful building. A shame to see it boarded up. It would be a good residential renoavtion project for someone.

Diogenes: I suspect it is a money pit. I've never been inside, but I've been in the houses either side. It has no garden and is sort of wedge shaped - a real challenge!

We have looked at this house many times and wondered what it used to be. It is a fine looking building but as you say, it would be a major project to restore it. Even so, it would be a shame if it gradually deteriorates and then crumbles away (or falls down).