More than a Grain of Salt

Salt for the roads in Touraine has quite a journey. It comes from Spain by sea, then is trucked into the Touraine.

The authorities are assuring us that there will be no shortage, even if this winter is Siberian. Every year a contract for this indispensible commodity is signed with a supplier and the roads are salted to ensure safe travel in the snow and ice. The responsibility for overseeing the contract is shortly to change. At the moment it comes under the auspices of the Parc routier départemental de l'équipement (PRDE), but from January 1, due to decentralisation, the conseil général will take over.

Our local salter snow plough truck on its rounds. 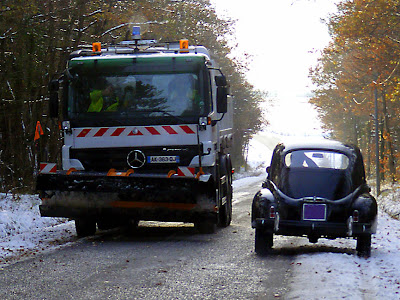 According to the PRDE spokesperson, this isn't a big change, in view of the fact that there will be no change of supplier over the next 4 years. The contract is unusual, in that it doesn't specify a precise quantity of salt, or even a minimum and maximum figure, but an estimate based on previous years' consumption. The French financial year runs from 1 January to 31 December, which means that the annual contract always bridges two financial years. To make it even more of a pain to administer, the final bill is never known in advance, making it very difficult to budget for. In a mild year, the Touraine might spend 150 000 euros on salt, but in a severe winter it could go as high as 600 000 euros. Last winter the total spend was 400 000 euros.

The supplier is required to supply the necessary quantities in a timely manner, even when the official weather forecast doesn't predict the bad weather. The salt is extracted from a mine in Spain. It takes 12 hours to get it by truck to the Touraine, but this is a very expensive way of transporting it, so it is put on a boat as far as Rouen or Rochefort, where it is stockpiled. As the need arises it is trucked to 19 depots in Indre-et-Loire and from there the big salter vehicles are loaded. If there is an emergency, or any risk of a break in the supply line, the supplier is obliged to truck the salt directly from Spain. Transport accounts for roughly half the annual bill.

The Council depot in Preuilly. 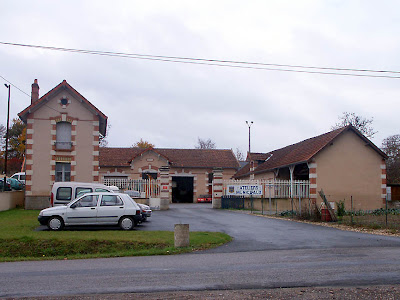 Two years ago, 5600 tonnes of salt was spread on Tourangelle roads, last winter it was 5200 tonnes. How much will it be this year? This much is certain - salt will continue to be an indispensible product for a long time to come if we want to keep our roads usable in snowy weather. There have been promising experiments with using sugar instead in Switzerland, but the Touraine has no intention of following their lead.

I've never thought about the cost of salting the roads before. It is unusual from our perspective. In Canada in the national park where we lived, they used gravel on the roads instead of salt because of the animals.

Sugar on the road instead of salt - that sounds interesting. No salt, no rust and cars run sweeter on sugar coated roads.

And all it will take is a wheelspin and some colour to make a slushpuppy :)

Sand and gravel was tried in North Yorkshire a few years back and proved quite successful. This wasn't from any wildlife point of view... it was just cheaper! We are talking Yorkshire!!
However, the motoring lobby pushed for salting to return.... despite visible proof that the gravel worked as well, if not better in some circumstances. I believe that the council's compromise was 80% sand/gravel to 20% rocksalt... still cheaper! West Yorkshire has used a sand/gravel/rocksalt mix for years... but I don't know the ratios.

That's a very railway-looking building!
A Salt solution freezes at minus 9 centigrade, so if it's really cold, salting the roads doesn't work.

PG: I don't think it's ex-railway. The old station is the other side of the D725. My personal observation is that they actually seem to use a mixture of salt and coarse sand. I see in yesterday's C'est Touraine that the CG is presenting somewhat different figures, but it may be for total spend on winter traffic circulation measures.

Kirstie: interesting. I'm surprised the salt doesn't have more of an impact on vegetation here.