Here is a selection of the food we enjoyed over Christmas. 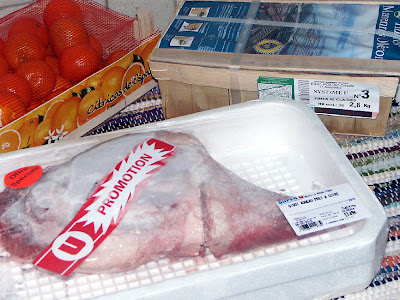 I bought the leg of lamb in September when it was on an excellent special (7.40€/kg). It's been sitting in the freezer awaiting the proper moment for us to cook it. Christmas seemed as good a moment as any, and 17.40€ for the Christmas joint seems like a real bargain. There will be lots of left overs, so shepherds pie is on the menu soon too. Yum. With no indication of where the lamb grew up, I am guessing it came from New Zealand. If it was French it would say so loudly and proudly (and be twice the price).

The oysters I bought on the Thursday before Christmas. They are size 3 fines, finished in the saltmarshes of Marennes Oléron and have the IGP to prove it. The oyster beds at Marennes Oléron are in the area our oysters usually come from, being only 2-3 hours west of us on the coast. The selection of oysters only included fines and speciales, the top two categories. These ones, produced for the supermarket (ie. 'own brand' oysters) were the best value, at 18.95€ for 2.8kg (3 dozen). I could have paid over 40€. Normally we pay about 13 - 15€ a box, but we generally buy the ordinary creuses, that are not finished in the saltmarshes for extra flavour, plumpness and the dark green algal fringe that is particularly highly prized. This year there has been a lot of publicity about a price hike for oysters, but from what I've read, the real problem will be next year, as many of the baby oysters have died due to a bacterial attack.

The clementines are a treat for Simon. Curiously, I love the smell, but dislike the taste. They were 2.50€ for a box and have just hopped across the border from sunny Spain. Clementines are big business at Christmas time in Europe, but I don't remember them being so in Australia (maybe because the boxes of mangoes were more enticing to me).

Apparently the trendy Christmas dinner this year in France was snails and venison, but many families opted for the traditional oysters, foie gras and turkey. French families would eat Christmas dinner on Christmas Eve, rather than the day itself.

Lamb and oysters, two of our favorites. Shepherd's pie too — hachis parmentier.

LOL for the trendy réveillon meal of venison and snails. How do you find out what is trendy? Way out here in the country, I wonder. But I do know some people (you know them too, Americans) who had venison for dinner yesterday. I'll have to let them know that they are very tendance this year.

Hope you had a good Christmas Day and are enjoying today's sunshine.

My English mother made wonderful
shepherds pie, but it was always
made with leftovers from a roast.
Many of our TV chefs make it
with sauteed raw ground meat
which is topped with mashed
potatoes. Not the same in my
opinion.

That's a really good price on the lamb. I love it, could eat it all the time.

We were inundated with home made tamales for Xmas. Spicy red ones from a dear friend and green ones from my partner's mother. And refried beans with pork and lard. That's holiday fare in the SW.

Legs of lamb beat turkey anytime in my book. With "flageolets"!

Just like Diogenes, I could have it almost every day of the year. I had choucroute for lunch on Xmas day and the unavoidable turkey at friends' for diner.