The rather rambling 17th century house you get a glimpse of through the imposing gateway in rue du Cygne, Preuilly-sur-Claise, is known as Hôtel d'Harambure, after the man who constructed it. The word hôtel in this case denotes a private town house, not an establishment with rooms available to rent for the night, although both meanings are used in French. 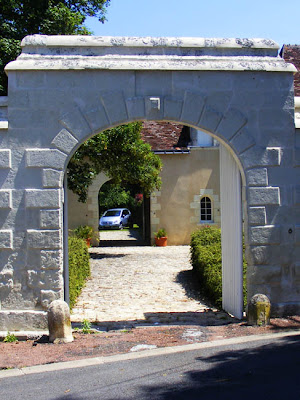 Curiously, this is the only building in Preuilly listed in Le Patrimoine des communes d'Indre-et-Loire as being made of pierre (stone). This is as opposed to tuffeau, the soft local limestone. I assume the implication is that it is made of rough field stone, or more likely, harder stone that has been imported from another district.

One of the most interesting features of the interior is a remarkable box bed, contemporary with the construction of the house and installed for the cook. The cook was an important character in this type of household, so their safety and comfort was taken into consideration. The highset bed made getting in and out easier and protected its occupant from rats.

Jean d'Harambure was a loyal companion of Henri de Navarre at the time of his struggle to win the throne of France and become le bon roi Henri IV. During the battle of Aumale against the Spanish in 1592 he saved the king's life, losing an eye in the process. Like the king, he came from Navarre, a small kingdom in the French Pyrenees, in the south-west of modern France. Settling in Preuilly, Harambure built this house and founded a family. The family prospered and grew, so Jean built another manor house and barn, this time at nearby Yzeures-sur-Creuse. Protestant, he recanted his faith under Louis XIV, who revoked his grandfather Henri IV's pragmatic solution to the Wars of Religion, the Edict of Nantes. Once again, it was awkward, if not dangerous, to be a dissenter. Royalists like the Harambure family were given the choice of emigrating or abjuring.

By the 18th century the family had expanded its holdings to include a manor and a fortified farm near Chaumussay. Jean's descendant François d'Harambure was the representative for Preuilly in the Estates-General of 1789 held at Versailles. This national general assembly, a sort of parliament, was called by Louis XVI in the expectation of sorting out his government's financial difficulties. Instead, it triggered the Revolution. Although firmly monarchist, François d'Harambure was an equally firm constitutionalist, and served as a general during the Revolution. He seems to have been a level headed and courageous man who strongly and publically stood up for what he considered right, no matter which side of the political fence it fell. However, after narrowly avoiding execution in 1793, he retired from public life at the age of 51 to spend the remainder of his days quietly in Preuilly.

Email ThisBlogThis!Share to TwitterShare to FacebookShare to Pinterest
Labels: Glimpses, Pictures of Preuilly

History fascinates me. Thank you for this well documented post.

Word verification is chravo. I think Google meant bravo, but it is such a lousy speller!