A World of Oysters

In France the winter holidays mean oysters and les huîtres mean les fêtes de fin d'année. They are inexpensive and widely available, at supermarkets, markets and fishmongers. Simon and I usually buy a box of three dozen size number 3. We eat them day and night, breakfast, lunch and dinner, cooked and raw, for a couple of days until they are gone. Our temporary kitchen is so cold they are fine just left in the box on the bench.

There are four main varieties to look out for:

La Plate ('the flat'): for centuries this was the only oyster to be had on the coast of France, but a disease caused their disappearance in the 1970s. Quite rare today, you find them sold as belon in Brittany and gravette in the Arcachon Bassin and Bouzigues. The wild variety is called pied-de-cheval ('horse hoof'). L'huître plate can be recognised by its round shell and grey-white flesh. It has a full-bodied flavour, very salty and should be prepared with the greatest simplicity.

'Take a health cure - eat oysters' is what is says on the bag. 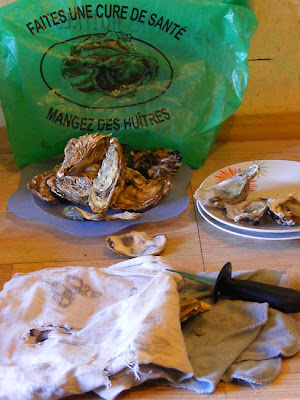 La Creuse ('the hollow'): This is by far the most common and the most affordable. They vary subtley in flavour depending on their geographical origin - salty and nutty from Normandy, iodiney and recalling the shallow estuaries in Brittany, delicate and invigorating from the Atlantic coast. Allow 6-8 oysters per person if you are eating them raw, and 5 if they are served warm. They are numbered from 0 (the biggest and fattest) to 6 (the smallest). On a platter, numbers 3-4 are ideal (below). 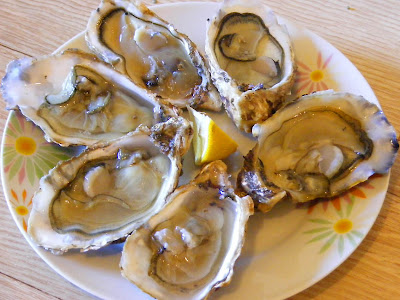 La Pousse en Claire ('the saltmarsh grown'): A little gem from the Charentes, protected by a Label Rouge certification, this is the most desirable variety, unlike any other. Raised from 4 to 6 months in shallow water, only 2 to 5 oysters per square metre, they acquire an almost crunchy firmness. Generously filling out their semi round shell they have a mild sweet taste. If you find them, eat them as they are, as they need nothing to enhance them.

La Fine ('the fine'): A speciality of Marennes and Oléron, these oysters are finished in the old salt marshes. The fines stay there a month, 20 oysters to a square metre. An even more deluxe version, the spéciales, are only 10 to the square metre and stay in the saltmarsh twice as long, developing more flesh with a very sweet flavour. The vertes (green fringes) are very prized, retaining traces of a microscopic algae. They are eaten plain or with a drop of lemon juice, a trace of shallot vinegar and bread and butter.

MMmmmmmmm, I love oysters, what a Christmas treat

Huîtres creuses literally means "hollow oysters" — they have one shell that is bowl-shaped, compared to the two flat shells of the huîtres plates. The oysters called pieds de cheval are by definition very large, I think.

It's time for us to buy some oysters for the holidays, that's for sure.

I can only dream of the boxes piled high in the supermarkets over there while I sit in a snowy UK. We love them, but they are just too expensive here:( Diane

Does eating them raw mean they are still alive?

So many varieties, it's fascinating. Enjoyed yesterday's velo-rail post as well. That's something I would like to do. I take it your kitchen has no heat right now?

I shouldn't have read your post this morning. Now I feel as if I'm missing so much here where I have all I can wish for. When I spent a week in Bayeux, in Normandy, last summer I had at least one dozen of oysters every day. That was so great. I love them.

Were all those oysters for your birthday party?

Kirstie: I know, and prawns and mussels are cheap and good too.

Ken: Many thanks for the link and the explanation of creuse. I wasn't happy with my rather too literal translation, but got put of the track by thinking the name must refer to the furrowed exteriors or the cresent shape. I've had the native flat ones from Essex (the same as the French ones I assume). I'm not sure they do get so very large, but maybe in the old days they did.

Diogenes: I can keep the temporary kitchen bearable with a plug in electric radiator, but as it will eventually be the pantry, it has no heating otherwise.

CHM: Sorry:-) Actually, no, I didn't have oysters yesterday. We had them last weekend, and will no doubt buy a box of them this week for over Christmas.

Susan, I went to school with the Pinneys of Orford Oysterage fame... I can assure you that the Suffolk/Essex oysters can get very large [3" across]... but they are not good for eating raw. They are superb though in a steak and kidney pudding [the special ingredient that no one ever talks about... but it is there in Mrs. Beeton!] I cannae stand raw oysters... too damn slippery!

Tim: is it only the really big ones that are no good raw? I've certainly been offered them raw as a great delicacy. My understanding is that oysters were a staple up until the end of the 19th C because they were cheap and plentiful, and added to steak & kidney as a filler, to discreetly stretch more expensive ingredients. I doubt if anyone thought they were special at the time :-)

Special? Probably not.... but they certainly add something to the flavour. I use some oyster sauce or anchovy sauce to get the same effect.... you just don't get the chewy bits! I meant that the huge ones were not good... Orford Oysterage supply Frotnums & Messings... I'm very sure that THEY wouldn't allow any food in the food hall that wasn't better than superb!!

Now that's what I call a Christmas treat. Can't imagine being able to leave a box on the kitchen counter in Oz though :)
Have a fabulous Christmas, I've enjoyed reading of your lives in France in 2010 & really look forward to reading more in 2011.
Cheers
Anna
xx