Yoghurt, or yaourt as it is known in French is very popular. Many French women and children eat a pot of yoghurt every day, often plain, natural and whole milk. Dairy products are considered an integral part of a balanced diet, and all dairy products, including cream and butter, are considered healthy by most French people.

Foods that can deliver minerals, such as the calcium in dairy products, are particularly favoured (it seems to me even over those considered high in vitamins). I suspect this is all part of the attachment to the land and terroir. Fat is not considered unhealthy per se, so there is not so much emphasis on the fat content of dairy products. It is considered to be intrinsic to flavour, mouthfeel and the general enjoyment of food, and it is assumed that you will consume it in moderation, delighting in its richness, but not being greedy. One of the few health warnings you will get is to avoid foods that combine fats and sugars – these are for special occasions only, not for every day.

Natural whole milk Activia, made by Danone, and my personal
choice of daily yoghurt. 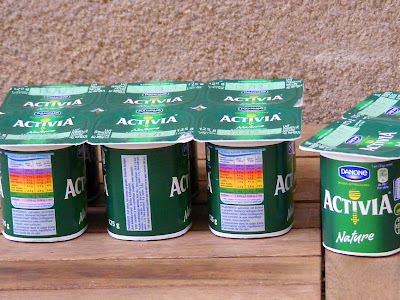 In the light of this I was interested to read recently that Danone has decided not to sell its Densia range in France. Densia is a low fat yoghurt with added calcium, designed to appeal to those worried about osteoporosis, but apparently French women are not interested in this fortified product, as they feel they already consume adequate quantities of calcium in a wide range of dairy produce.

Danone, a French based company and now the multi-national rival to the Swiss Nestlé, was an offshoot of a glass jar manufacturing company which made a spectacular move from 'container to content' in 1970. From the beginning they have focused strongly on health, baby foods and medical nutrition and are the European leaders in the latter, the world leader in fresh dairy products.

I also like Activia but am not a
fan of most dairy products,
certainly not plain yoghurt.
This leads me to wonder whether
the product we get here in the
US has been so sweetened that it
falls more into the category of
a dessert. Do like it though so
hope it has health benefits too.
Don't believe the probiotics they
tout in the ads are very "active"
though.

Interesting...I have Dannon (as it's spelled here)coffee flavored low-fat yogurt often for breakfast. And I think the Activia label you mention is relatively new in the States.

Hi Susan... take a look at this entry on our foodie blog... there is some very nice yoghurt available... And I'll be surprised if La Borde don't have something at La Celle Guenand next w/e. They do decorated pats of butter, old fashioned style with a picture on.
As well as the Crème crue and the Confiture de Lait... next time you drop over we'll show you the Yogomagic. The next batch will be made using a frozen La Borde yoghurt as the starter [thawed out of course]... this 'bulk' youghurt will be the basis for our yogices next year [once we are in the Laiterie... there is a suitable place!]

Sheila: Activia nature is not sweetened, but I eat it with our homegrown fruit. There is a big battle going on here at present due to a change in legislation regarding health claims for food. It looks like the probiotics claims are not provable, so the yoghurt manufacturers will not be able to advertise their soi-disant health benefits.

Diogenes: I didn't realise they spelt it differently in the States. I wonder why?

Tim: La Borde doesn't do butter all the time. She (the laitiere) has had it a lot lately, but she assures me that is unusual. I don't buy it any more as it is unsalted, and Simon doesn't like unsalted butter. I buy her yoghurt from time to time, and it is very nice, as you say. At the moment we don't make our own yoghurt because we have a use for the empty yoghurt pots, but I will probably start making it eventually. Susan.

I tried Activia last year, here in SoCal and wasn't impressed in the least. Even less so after all the commercials you have to go through on local TV. When in Paris, I indulge in Danone's Velouté. Every time I have one, which is more than twice a day, I think how wonderful it would be to have them here in the States. But probably Dannon think, for whatever reason, they wouldn't be to the taste of the American public.

Completely off topic, I just made several jars of banana jam. Delicious.

Susan, I guess the Dannon spelling yields a pronunciation that's somewhat close to the French version. I think if they branded it "Danone" here, people might call it dan-one or da-no-ne. Just a guess...Interesting to hear about the probiotic claims not being provable. I know people who buy it for the alleged health benefits.

Diogenes,
You're exactly right about that. For many years I wondered why they spelled Danone Dannon, until it dawned on me they tried to reproduce as closely as possible the French pronunciation or sounding of Danone.

Even better than buying yogurt is making your own, which is quite easy. Fresher and less expensive, too. I seriously distrust any commercial yogurt that adds flavorings, as they usually contain various kinds of sugars or artificial sweeteners.

Emm: At this stage we deliberately don't make our own because we have a use for the pots, and whilst I don't want to seem like a walking ad for Danone, Activia nature only contains whole milk, whole milk powder and lacto-bacteria. I agree with you about the additives, especially the low fat yoghurts, which are usually sweetened with artificial sweeteners.