This year I have joined the Suivi Temporel des Rhopalocères de France (STERF or, in plain English, the French Butterfly Atlas project). Some of you (my family in particular) will be familiar with 'bird atlasing'. Surveying for butterflies is based on the same principles.

The aim of the project is to find out what species occur where and whether populations are increasing, decreasing or stable. Volunteers and professionals all over the country gather data from (April) May to August (September) and send it in to the French National Natural History Museum biodiversity recording unit. They do the number crunching and produce graphs showing the population trends and distribution maps. The data also feeds in to the annual European report on the state of grassland butterflies and the International Red Lists of Threatened Species. Butterflies make good indicator species because they are particularly sensitive to habitat change. They are also easy to survey because they are generally easy to identify without capturing.

One of the squares I have been given to survey. 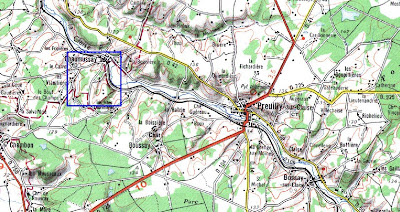 Each surveyor is allocated one or more random 2km² patches within a 10km radius of their home. They then decide on 5 transects within that square. A transect is a strip 5m wide and of varying length, depending on how rich the habitat is. For the French butterfly survey, you must be able to walk it in around 10 minutes, counting and identifying all the butterflies within the 5m strip as you go. You must only survey in good weather, as it is pointless going out in conditions when your target will be keeping out of sight. 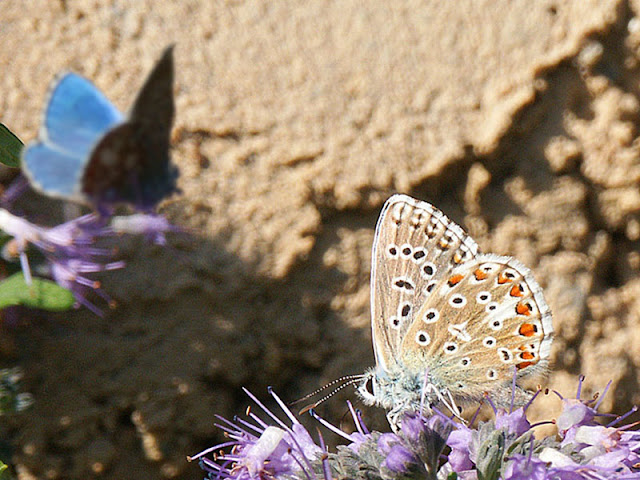 Of particular concern at the moment are butterflies that inhabit grasslands. It is clear that their numbers are plummeting in almost every case (a total population decrease in Europe of 70% in the last 10 years, and it is believed that the population was already greatly reduced when surveying first started). The causes are the increased intensification of farming (eg. broadacre farming, improved pasture) and conversely, the abandonment of small, steep sites which were once grazed, but are now considered uneconomic. On these latter sites, butterflies thrive for a couple of years, but with no grazing stock the grassland gets rank and is slowly replaced by scrub, and the butterflies disappear. Intensive farming on the other hand, uses almost every inch of soil for monocultured crops, with no space for the mosaic of wild flowers and wild grasses that the butterflies need. Improved pastures replace native flower rich grasslands with a much less complex mix of much lower habitat value for butterflies. Even haymeadows don't provide as high a quality of habitat as they used to, as in the modern farming calendar hay is cut earlier (and silage even earlier).

This is the middle of my other survey square. 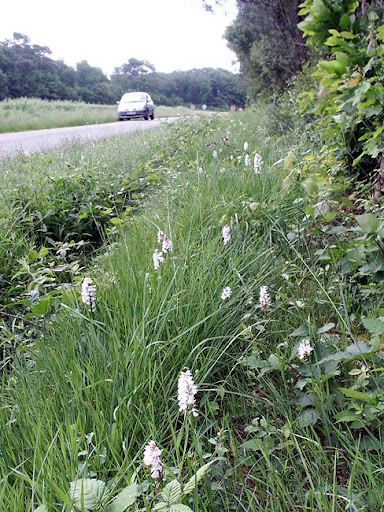 As a result, STERF surveyors are told that 3 of their 5 transects must be through agricultural land. The aim is not to concentrate on high quality nature reserves, but to get a broad and realistic picture of the situation throughout France. The clearer the problem becomes, the more chance the project has of influencing policy. Environmentalists believe that the Common Agricultural Policy must be reformed, to encourage and allow farmers to become ecological stewards rather than ruthless exploiters of the landscape.

If you are interested in monitoring butterflies and can commit to about an hour a month between May and September, please contact STERF. Last year there were only about 120 surveyors, checking 660 transects. Some departements don't have a single surveyor yet. You don't have to live in France (or even speak fluent French) but if you have a holiday house here and visit once a month during the summer you could participate. If you have any questions don't hesitate to get in touch with me or with STERF. And if you see me wandering about the Chaumussay area or the Parc de Boussay with a clipboard, you will know what I'm up to.

Did you hear about all those birds falling from the sky in incredible numbers [mostly red-wing black birds and starlings] in Arkansas? It is still a mystery. There are also thousands of fish dying for no reason at all, so far as we know.

Let's hope the meadow isn't an oasis?!
I doubt it, myself, as there is a fairly good corridor from Grand Pressigny to Petit P. along the Aigronne Valley... and there is a nice variety of grazing and mown land.
But our grassland is getting ranker while we await "The Machine"
I forgot to tell you about the new Beaver activity here in G-P.
Tim
WV is "Fusneste" a strange thing, seen in spring mainly.... usually where Wrens are concerned.

I read that dead birds have also fallen from the sky in Central Sweden, Louisiana and Kentucky in addition to the fish in Chesapeake Bay

Oui, Cousine, I've heard of the birds in Sweden also. They're not sure it might have been the result of fireworks. A little far-fetched, in my opinion.

We've seen these reports of mass deaths too. I think the reports are more a phenomena of how newspapers work than how nature works (similar to the way if one plane crash is reported, then several others will doubtless follow). The deaths are mysterious, but I suspect weather conditions for the birds and disease for the fish.