During the early hours of Sunday morning a wild storm called Xynthia hit Preuilly. It had come up off the Atlantic through Portugal, through south-west France and went on to hit the north of France, Belgium, and up into Denmark. At least 15 people have been killed in France, and friends of ours to the south, north and west had no electricity, along with a million others.

Our one missing slate. 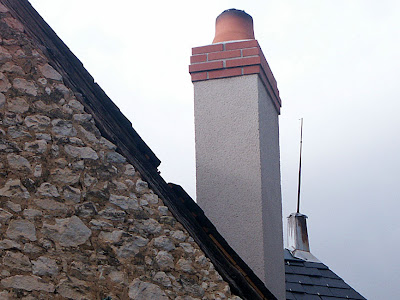 Luckily, Preuilly seems to have come out of it relatively lightly. We have lost a single ardoise (roof slate) but many houses have lost roofing material, which crashed down into the streets. After a long cold winter, wind gusts of over 100kph was the last straw for some old buildings. There is stone, tile, slate, glass and timber lying in the street. I met the pompiers (fire brigade) this morning blocking off a street because the state of one of the roofs was clearly dangerous. They spent the morning cruising around town assessing the damage and cleaning up where necessary. Many places with big barn doors look like they've had an explosion inside, with the doors straining outwards on metal bars.

The half finished trellis at our verger / potager, looking
distinctly drunken. The only other casualties at the orchard
were a few overwintering cabbages, which have all been beheaded. 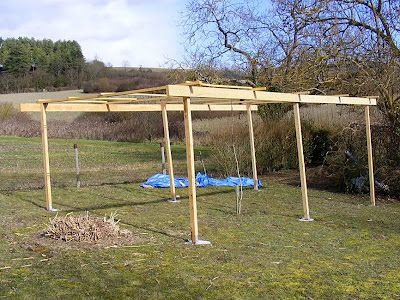 A street lamp that has snapped its moorings. 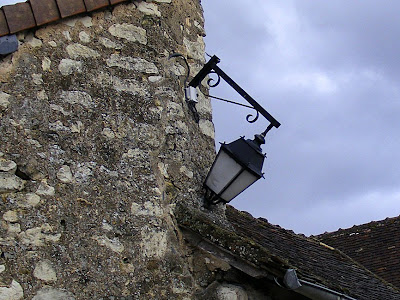 This roof is now so dangerous that
the street below has been blocked off. 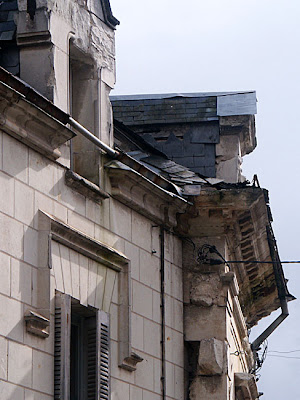 The stone apex of the gable on this place
has broken off, taking some slates and a
crenellation with it. Further along the
roof ridge the zinc is lifting. 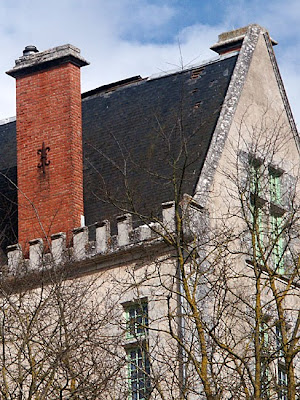 Pleased to hear that you weathered the storm OK.
Leon

Glad to hear you are OK. Amazing pictures. They said on the news last night that winds were 180 kmh - hurricane force, and there were pictures of a town on the coast with several feet of water.

Good to read that you are doing fine except for that one ardoise. Take care

Once again good to hear that you have survived without serious damage. Friends in Epeigné have only recently had their electricity restored – that's a good 36 hours without power. They were forced into a romantic candle light dinner last evening.

The phones weren't working today but may be back up this evening.

No blog since Saturday for Walt and Ken so I assume that Saint-Aignan has been without power too.

Xynthia - is that pronounced like Xantia or as we say in OZ Zantia???
Leon

Glad you came through the tempête safe and sound!

Glad to know Preuilly was somewhat spared the fury of Xynthia, but like Martine, you're not spared Chinese smut.

Ken and Walt seem to be still without power. I might call them later this morning, when it will be past 6:00 P.M. their and your time to know how things stand and post an update in the comments section of their blogs.

Thanks all for the concern. It was noisy here, but we were pretty lucky. We didn't lose electricity, but the internet went on holiday for a couple of days.