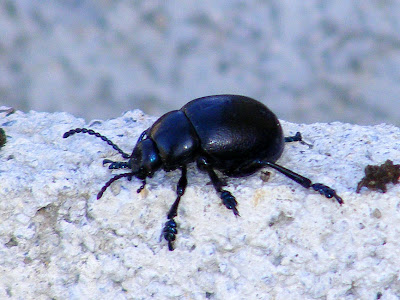 While I was gardening yesterday a black beetle lumbered purposefully along the retaining wall. It was a male Lesser Bloody-nosed Beetle Timarcha goettingensis (called le petit crache-sang in French i.e. 'the little spit-blood'). Bloody-nosed beetles are so called because when alarmed they ooze a red substance from their mouth and kneecaps. They are amongst the largest in the leaf beetle family Chrysomelidae and have that family's typical smooth rounded profile. Bloody-nosed beetles cannot fly, and have a very distinctive rather ponderous gait, raising their bodies off the ground in a somewhat awkward looking way. This one was a beetle on a mission (presumably to meet a female beetle) and was too busy to be frightened by us encouraging him into more photographic positions. You can tell he is a male by his very large feet. Like many insects, male bloody-nosed beetles are smaller than females. Both this species and the larger T. tenebricosa are common in France.

Look at those feet! 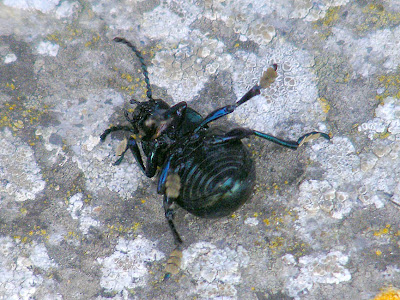 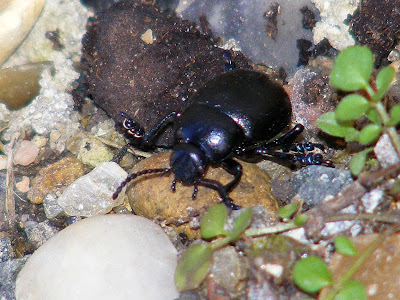 "You can tell he is a male by his very large feet."

Ha! Had me laughing out loud (lol).

Walt: Trust me. It works for les Crache-Sang. It's known in the trade as 'enlarged tarsi' and quite a few male insects have this character. And Monsieur size 11½ here with me didn't know what was so funny :-)