These are different from little orange visitors.

Do you live in France? Do you have a wood burning fire or stove? If so, you've probably spent the winter disposing of little red visitors on a daily basis. 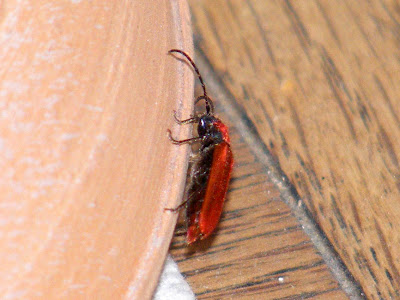 They are a beetle in the Cerambycidae family, known as longicorns in English and capricornes in French. If you live in France and you've had these beetles in your house you may be worried now that you know that they are capricornes. You get the impression that capricorne beetles can eat entire houses in a single night if you read some accounts.

Worry not. Very few capricornes are in the least interested in your charpenterie, and those that are only like wood that is a bit damp (so your problem is not really the beetles, it's your roof and guttering). Many species of capricorne are in fact endangered because what they require is dead wood in a still living tree. They come in a wide variety of colours and sizes (there are many species). 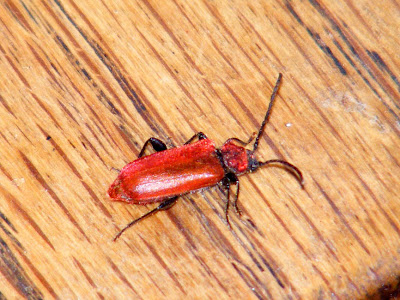 The red ones are most often Pyrrhidium sanguineum or Welsh Oak Longicorn Beetle. It doesn't seem to have a French name, which is curious, as it is quite common. They arrive in people's homes in the fire wood. Their natural emergence is scheduled for this time of year, but the warmth of their new homes causes the adults to emerge throughout the winter. Both because of their scarlet colour and their habit of heading for the net curtains (they are programmed to head for the light to escape) they are highly visible. Not only are they visible, but there is usually more than one, seemingly appearing from nowhere. The homeowner begins to worry about the state of their woodwork, but there is no need. Oak Longicorns don't like milled timber, only rough oak with its bark still on.

Looked at closely, for example through a 20x loop, they are extraordinarily beautiful. The red colouration is not created by the pigmentation in the wing cases, but is more like a red gold dusting of scales and hairs that can be rubbed off to reveal a glossy black beetle beneath. You can see a great close up photo taken by Dimitri Geystor on Le Monde des Insectes (the best French entomology online forum).

Amazing - as I looked at the Blog Jill was carrying yet one more of these beasties to the door. We are averaging perhaps 15 visitors per day with quite a range of sizes and colour intensity. This is our first year in four that we have had them, perhaps because the wood is a little damper this year; or is this a vintage year? Your comments about their preferred diet are reassuring.

John: Size will vary depending on whether they are male or female and on the quality of their nutrition as grubs. The range of colour intensity depends on how rubbed they are and often on temperatures as they develop. You may be right that there are more of them because the damper wood is more to their taste. I haven't heard that it is a particularly bumper year, but longicorns have quite a long life cycle and this does tend to lead to periodic years when there are mass emergences.

Curiously, I don't think I've ever seen one in our house.

Me neither. Will look out for them.

I feel reassured too. Thanks, Susan. I've gotten marketing telephone calls from people saying they will come out and do a free inspection. I believe those people might actually be selling something. Do you think it might be possible?

Don't live in France and have never seen them. Their color is quite pretty.

Ken: The pest control business is mostly a con, advocating the use of specialist and expensive chemicals at far too frequent intervals. Better control of household pests can be achieved by preventing damp and removing dust from corners regularly i.e. the particular conditions pests like.

We've had these beetles in our last batch of firewood, but not previously (which is curious because until recently we got our firewood from the same place as John). Perhaps John is right and it is a bumper year for them. It's hard for me to judge because this is our first year of operating the fireplace.

Your blog is very interesting. Thanks to share your daily observations. About the Pyrrhidium sanguineum, I found it has a French name: Callidie sanguine or callidie couleur de feu.
Best regards,
Catherine

Catherine: many thanks for letting me know. Your website is lovely!