Recently we were contacted by Pascal Maîtrejean, who told us about his father, Victor. This was in response to a request for information we posted 2 years ago. 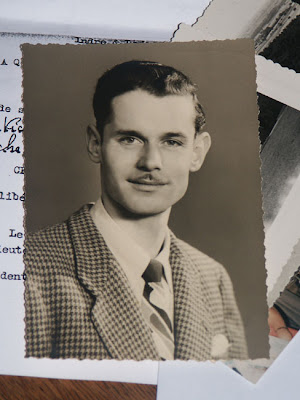 Victor Maîtrejean was born in 1921 in Algeria (then a French colony). At 14 years old he lost an arm in an accident on an airfield when he was turning a propeller by hand to start an aeroplane engine. In 1940 he and his mother moved to central France, where he took up an apprentice gardener post at the Château de Pray between Amboise and Mosnes.

The memorial to the maquis Césario, deep in the forest
they used to hide in. The only sound here now is birds calling. 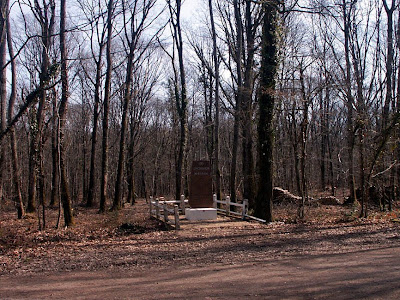 The Germans took over the château, and when they left, an SS officer offered Victor a gift of the vehicle that had been used as the officers' transport. Victor, who was young and impressionable, was delighted and moved towards the car. His boss, the head gardener, who had been through the First World War, warned him not to touch it. Sure enough, the door had been booby trapped with a grenade, and had Victor opened the door... 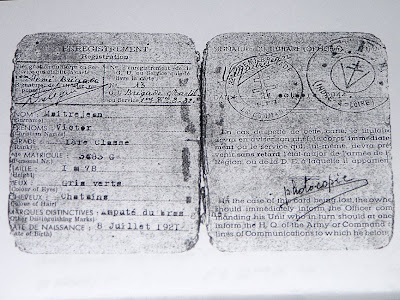 Following this event, he joined the maquis (the Resistance), and didn't return to the place until the end of the war. I have translated his account of some of the action he saw. (FFI stands for Forces Françaises de l'Intérieur.)

A close up of the memorial. Carved into the bottom part
are the names of all the dead. 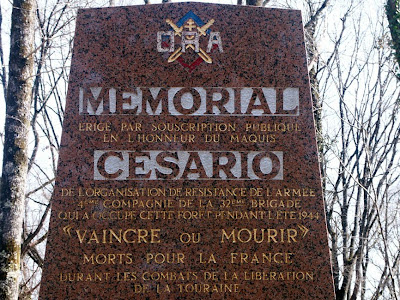 "On 24 June 1944*, being in the maquis FFI of Loches, commanded by Césario Bretegnier, we took up arms and left at 3 o'clock in a bus to patrol and ambush. At 9:30 after having made around 30 kilometres, we came to an area called le Liege. We hid up and rested until 11:10, when we saw a German truck coming over the brow of a hill. As soon as they passed we attacked. The truck caught fire and we killed 13 German soldiers - a number that must have brought us bad luck, because we didn't know that behind this scout truck there was a company of Germans. The battle raged from 11:10 to 18:05 - 34 against 150 to 200. We killed 21 German soldiers and set two trucks on fire at the beginning, but it was too much and later, field upon field, vine after vine we retreated and lost 7 men killed and 5 others we know were captured and forced to dig their own grave then interred alive. By this time some of us were down to a single cartridge or grenade and we had lost our bus. On the Loches road there is a memorial as you leave le Liege, for those who were buried alive, and another at Verneuil-sur-Indre to my companions who were killed or died after deportation. As a result of my participation in this battle I have been awarded the Order of the Army."

*His son thinks this may be a mistake and it should read aôut (August).

Note from Simon: Victor passed away last year, which was when Pascal found the ID card and some associated paperwork. Vale, Victor. I think we would all like to think that we would have been as brave.
Posted by Susan at 09:00

Email ThisBlogThis!Share to TwitterShare to FacebookShare to Pinterest
Labels: Loches and area, Memorials, Towns and Villages near Preuilly

Very impressive and moving story. I think the son is right saying that it was in August as it took several weeks for the Allied to get ot the Loire after D-Day on June 6th. My father was in the Belgian resistance, but he never talked about it. I think the memories were just too gruesome. Thanks for posting about Victor. It's a great tribute to a fine and courgeous man.

A very moving story. It's good that we remember what people in previous years had to endure so that we can live as we do now. We take so much for granted.