Preuilly's eleven year olds are just back from a week long school camp in the Pyrenées. Our neighbour Tifaine and her best friend Théo (Valérie and Stéphane's eldest son) both went, as did Valérie, because she works at the school. Jessica, who lives on the market place and likes to greet me with 'hello' in English, also went.

At the beginning of the school year, which in France is in September, the kids raised money to fund la classe de découverte (Discovery Class) by selling bulbs. I bought crocuses and daffodils from Tifaine, and they are now coming up in the back garden. The crocuses are flowering but the daffs still have quite a way to go. 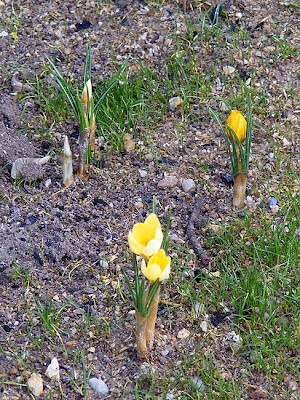 Tifaine sent us a charming little note during the week. (I don't imagine we were special, I expect the class was told to write and thank everyone who bought bulbs.)

I am on a trip thanks to the money from flower bulbs that I sold. I am having lots of fun. I returned Friday 19 March. See you soon.'

I must remember to give her the stamp from the envelope for her collection.

That was sweet of you to buy the bulbs and her to write to you.
Arent't snowdrops the first bulbs to come out followed by crocuses?
You must be in heaven now that the weather is finally warming up.

Have you check out this blog?
http://le-jardin-du-clos.blogspot.com/

Nadège: Snowdrops and winter aconite would be the first bulbs, yes, then crocuses, hyacinths and daffodils.