The other day I was in the Mairie asking about something and I picked up a slip of paper that said:

Last chance! Those absent at the 1st distribution of bin bags can come on Thursday, 11 March from 8:30 to 12:00 at the Village Hall.

In Preuilly we don't have to buy our rubbish sacks in the supermarket. They are distributed by the commune on behalf of the local waste collection company, SMICTOM. Our division of SMICTOM services the Sud Lochois, or the area around and to the south of Loches. Their head quarters are in Descartes, and their motto is au pays de Descartes, je pense donc je trie ('in the country of Descartes, I think, therefore I sort'). SMICTOM stands for Syndicat Mixte de Collecte et de Traitement des Ordures Ménagères (Joint Syndicate for the Collection and Treatment of Household Waste). Anything that has the Green Dot symbol to show that the manufacture is a member of a scheme to recover the packaging under the European Waste Management Directive should be put in the yellow sack, as should anything with the triangle of three arrows which is the international recyclable symbol.

At the Salle des Fêtes the deputy mayor, Monsieur Thoreau, and Jean-Paul Charrier, one of the senior councillors, and a couple of assistants were handing out rubbish sacks. My name was ticked on the list of residents, the deputy mayor double checked that we lived here all year now and that there was just the two of us in the household. He asked me how I was (in English, to practice), to which my response (in French, to practice), was 'très froid', then he commented on my fingerless gloves and we all discussed items of clothing that we found particularly practical in the cold weather (les vêtements de chasse found favour with everyone as hard wearing, warm and practical, whether one hunted or not). Jean-Paul asked after Célestine. Collecting one's rubbish sacks is clearly one of the many communal networking opportunities. 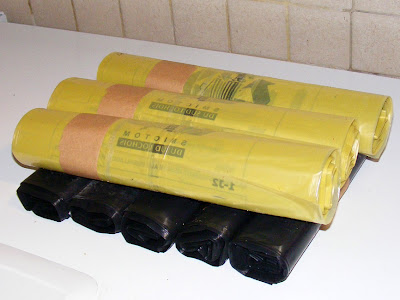 Our rubbish bag allocation is 5 rolls of black bags for general rubbish, and 3 rolls of sacs jaunes (yellow bags) for anything that can be recycled, except glass, which is too heavy to go in the bags and must be disposed of by the householder in the special bins placed in several locations around town. I think we've been given a total of 100 black bags and 60 recycling bags. French rubbish sacks have an integrated string for tying them up when full. It's a really clever design. A flat plastic thread runs down the length of the bags, perforated like the bags are so they can be separated for use. Each bag has its own piece of string, attached at the bottom, ready to be snapped off and tied round the top.

Our rubbish is put out in the street on Wednesday night for collection at about 5am on Thursday morning. We don't put a bin out - the rubbish goes out just in its colour coded bags and sits on the corner of the driveway along with two of our neighbours' - an arrangement to save the garbage men time. We could have a wheelie bin if we wanted to, but there is no requirement to do so here, and the streets are so narrow they would be rather a hazard. Some people leave their rubbish bags on their front window sill, so the garbage man riding shotgun doesn't even have to get down from the truck to pick it up.

Do you get all these bags free of charge? In Belgium we have a similar system, but the bags just cost a fortune!

Free, but I imagine "free" as in "hidden somewhere in the taxes". Not that the local tax is extravagant.

We find the system for collecting rubbish in LGP excellent. Like you, we get our free bags from the Mairie and each Wednesday put all the bags on the pavement just by the chateau. On Thursday morning it's gone.

As we usually stay each visit until Sunday, our wonderful, kind and helpful neighbour always asks us specifically for "les ordures" and will put out any more rubbish that we have generated the next week for us. How kind is that? I have noticed that other people, presumably second homers, will put a bag on the pavement on Sunday which stays there until Wednesday night. Presumably they don't have such a lovely neighbour as we do.

However, I have often pondered what happens to the mixed contents of the yellow bag. As it contains cartons, plastic, foil and so on, how does it get recycled ?

Jean: I assume they are hand sorted.

Is this an annual allotment, or for some other time period?