A Pair of Discoveries

On Saturday night Susan and I went out. This has always been quite a rare occurrance: when I was in a band I went out quite a lot but only to work, while Susan didn't - apparently going out 2 or 3 times a week to see the same band playing to a pub full of drunks isn't fun.

When we moved to London I wasn't in a band, but we did live in maybe the only part of London not served by a night bus. This meant we had to make sure we caught the last train home at 20 minutes past midnight - something that always played on our minds and stopped us relaxing too much.

We were beginning to think that living in the French countryside would mean that apart from the occasional town festival (here and here, for instance) our going out at night life was permanently over.

Not so. Last weekend I was reading the newspaper (a rare occurance, we don't often buy a paper) and noticed an advert for a concert by Shanna Waterstown at the Bar Caravage in Loches. Neither are names I recognised but it said blues and jazz, so my attention was grabbed - especially as Loches is only 30 minutes away.

Bar Caravage is a great place; cool, stylish and trendy (words that would normally put me right off) but really friendly and a comfortable atmostphere. It is built into the Tour des Cordeliers, one of the 15th century gatehouses of Loches and makes the most of its architecture in a very interesting way: I have seen greniers 'amenaged' before, but never in black (which has given me an idea....) 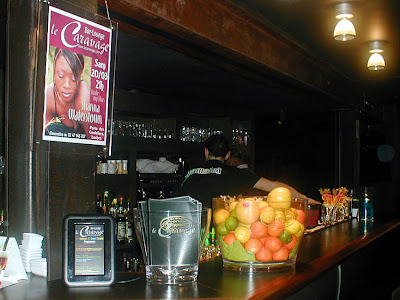 The bar serves an extensive list of drinks, with a particularly impressive choice of non-alcoholic cocktails. Susan had an Explosif, which was raspberry, ginger, apricot and lemon juice, for just over 4€. All the cocktails were served in tall icecream soda glasses, with beautifully presented swizzle sticks made in house from bamboo skewers decorated with fine wedges of apple and orange and a chewy marshmallow on top. We were fascinated to see that almost everyone bought a drink at the beginning of the evening and nursed that same drink throughout the entire proceedings. It seemed the only people who had more than one drink were those drinking beer. The non-alcoholic cocktails were just as popular as the alcoholic ones. The concert was free and the bar makes its money through the sale of drinks, so the reasonable prices and the moderate habits of the clientele were even more surprising. It makes it a very pleasant and cheap night out.

Shanna Waterstown is likewise great - an American living in Paris, with a rich mellow voice that she knows how to use to best advantage. She sang many classics, which the audience of about 50 people clearly knew and enjoyed, and a couple of her own compositions, which slipped seamlessly into the programme. For this show she was accompanied by pianist Philippe Ours, but she will be performing at Paulmy on 5 June with her 8 piece band. We are planning to go and hope a few friends will join us.

The venue is small - the audience of 50 was capacity - and we were only a couple of metres from the artistes. Some people were even closer than us, using the piano as a back rest. We were glad to have got there half an hour before the show started at 9pm, as late comers got progressively less comfortable seats. There was no problem about taking photos - Susan asked if she could, but as it turned out, everyone was doing it. 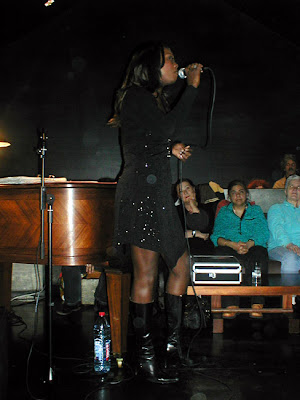 The sound quality was good too - not too loud, not jarringly distorted as happens only too frequently.

We will happily (nay, eagerly) go back whenever there is something that appeals on their calendar.

We have known about the bar at Paulmy that has bands on regularly but so far inertia has prevented us from going. That June date sounds interesting and luckily we'll be chez nous at the time.

As a couple new to the area as residence secondaire owners in Le Petit-Pressigny, we are always on the lookout for live music venues wherever we are. This sounds right up our street but we will be on our way home on June 5th. We had been told about the bar in Paulmy, but will keep our eyes and ears open for future events. Thanks for the post.

We'll also be chez nous at that time so it looks as though the small venue could have a high percentage of brits, that is, of course unless the place has been sold. I thought the Bar was up for sale last year?

We remembered seeing a sign for Country & Western night in Paulmy a few years ago. At the time we thought, In this little village there's a C&W bar? Where's it hiding?

Gail H: It's OK. Us Aussies will be there to leaven the British presence :-) One of the bars in GP is/was for sale, but I didn't know the bar in Paulmy was for sale. Anyway, a sale shouldn't affect any event that is already scheduled. We'd like to go there sometime. Our neighbours go and everyone recommends it.