It snowed lightly most of yesterday, somewhat to our surprise. It has been cold, not getting much above 0°C for the last few days, and it snowed quite heavily in the south of France a couple of days ago (very unusual for this time of year).

I've put the pots in their summer positions in the courtyard. The rose and the wake robin (Trillium erectum) in the corner will be completely untroubled by this snow, as they rest against the back of the permanently warm chimney. No snow settled on them at all. 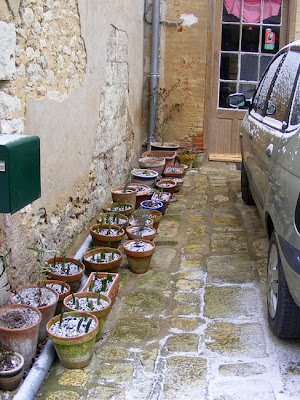 Apparently, according to our friend Stéphane, this is the longest winter since the early '80s in the Touraine. I assume he got this information from the news or something. It isn't the coldest winter though. Last winter had significantly lower temperatures, getting down to -17°C, but for a much shorter period. Our neighbour Edouard says that in 1956 the temperature remained below 0°C from the first to the 19th of February, and the winter wheat crop failed as a result.

Perhaps not ideal for flourishing growth (below)? I made these coldframes from kits a couple of weeks ago, but I haven't sowed any vegetable seeds yet. Edouard says he has sown tomatoes, but his polytunnel isn't sufficient to keep them from freezing. At the moment I have a lot of seedling foxgloves and alpine pinks in the coldframes, protecting them from the wind rather than the frost, as they are completely frost hardy. 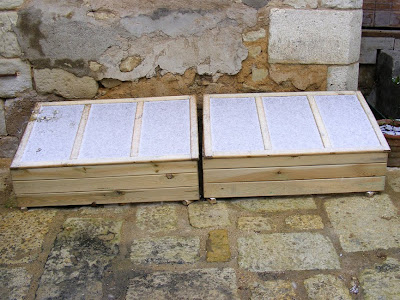 Email ThisBlogThis!Share to TwitterShare to FacebookShare to Pinterest
Labels: le Jardin, Our house in Preuilly, Winter

Neighbors of ours have told us that in 1956 the local trees froze solid. People tried to cut wood but couldn't, so solidly was it frozen. In Provence, a large number of the olive trees were killed by the cold that winter.

At some time in the early or mid-1980s, it was cold enough here to freeze the bay laurel hedge around our yard, down the ground level. It grew back from the roots over the succeeding years.

This winter has been long but also late. November was warm compared to November 2007, for example, which was very cold.

Susan,
Please no more snow stories. With less than two weeks before we are in the Loire, spring needs get a hurry-up. How about that snow in Provence.
Leon

In 1956, the weather in Paris was balmy in January. So balmy in fact, that I had my house plant outside in my small garden. And suddenly, overnight, on the first of February, the temperature fell I don't recall how many degrees, but way below the freezing point. All my nice house plants were frozen!

Ken is right, the olive trees in Provence, especially in the Var department, were frozen to the ground. An unheard of occurrence in such mild climate.