Getting in to the Health System

Yesterday we nominated the local general practitioner as our doctor. We've never met him and fortunately have had no need to go to the doctor since we have been here, so we hadn't got round registering with a medical practice. 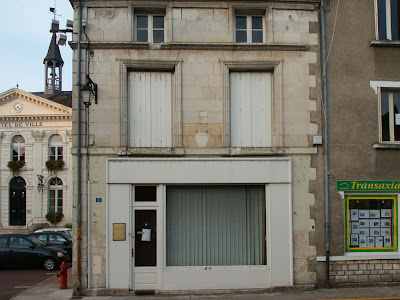 Even after presenting ourselves at the cabinet (surgery) yesterday and having him sign our form from RAM, which gets sent back to them with our details for our state medical insurance, we still haven't met him. Nor do we actually have our Cartes Vitales, the green plastic wallet card that allows one to reclaim a percentage of medical expenses. We've been waiting since November to get to this stage, after having registered the business and becoming regular taxpayers and therefore eligible for state medical cover. The covering letter from RAM says ' Vous avez choisi la RAM pour la gestion de vos prestations maladie'. Err...well, no we didn't choose RAM, RAM appear to have chosen us. We weren't even aware a choice was possible, since emailing RAM's senior partner RSI (Régime Social des Indépendants) has failed to produce any indication of where our file was at since November. I assume RAM stands for Régime d'Assurance Maladie, but nowhere on their correspondance or website can I find it written in full. Anyway, it appears that RAM are the agency responsible for the administration of the state health protection for trades people (artisans), business people and most independent professionals.

We have met the doctor's receptionist before. She lodges with Monsieur and Madame Mériguet. There was no one in the waiting room and I expressed surprise. Given the average age in Preuilly I expected it to be packed. However, she explained that in the mornings the doctor does home visits and appointments to see him in the surgery can be made by telephone in the afternoon. The surgery is closed all day on Thursdays and Sundays, but open Saturday mornings. We had been somewhat unorthodox by doing what it said on the door (sonnez et entrez) - simply ringing the bell and walking in. Presumably this instruction applies to the afternoons only and they do not expect to be disturbed in the mornings. Luckily, the doctor was actually in his consulting room, and she took the forms in to him. He signed them and she brought them back out. Now we just have to fill out our part and post them back to RAM. The Cartes Vitales will apparently appear in time, and all we need do is keep any record of medical expenses, on which we can make a claim up to a year later. 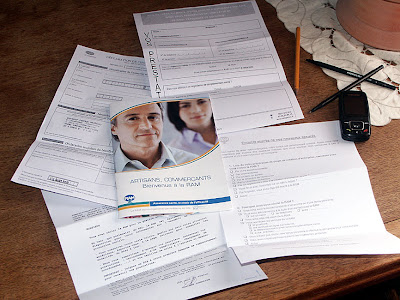 As a serial expat, I must say that health systems are mysterious things. The locals have all grown up with their respective systems, and such systems are deeply ingrained political entities. Although countries try to explain their systems, there is so much that is just understood and unspoken, an incomer is often hopelessly out of their depth. At least the French system hasn't reduced me to tears, which the British system did on several occasions. You would think something as basic as a health system would work more or less the same, but the devil is in the detail and negotiating a foreign health system, whether here or in the UK, is for me fraught with frustration and a certain sense of helplessness. Who does what and what they are called is just the beginning of it. The French system seems to be quite like the Australian system, albeit a bit more complicated, but neither the French or Australian system is anything like the British system.

French bureaucracy is famously lumbering and longwinded. Although we have had our problems, at no stage have we felt that we were being deliberately given a poor service because we were not French. For every time an email sent to a government agency goes unanswered, there at least as many occasions when a polite and helpful civil servant has responded within 24 hours. Getting a Carte Vitale seems to be a real milestone for immigrants to France, and I can see why. It is an important part of making you feel at home and part of the system.

Congrats and I hope you never need it. During one long visit to France, I needed to see both a doctor and a dentist. I was shocked by how little I had to pay, but then, I'm American and our health system, the one for everyone, is non-existent.