A few days ago, my friend Valérie gave me a dozen or so little kiwi fruits. They had been given to her by a farmer friend who grows them organically further to the south. They don't look much, but they are good. 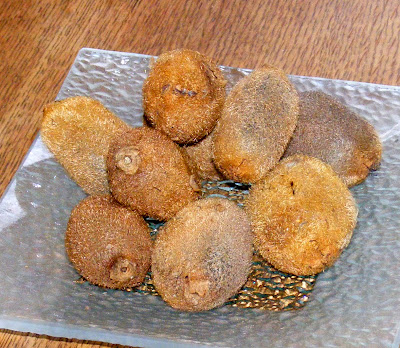 Kiwi fruit will grow in Preuilly (I've seen them in someone's garden, and there is a local producer who only sells kiwi fruit and asparagus on his stall in early spring), so I have bought a self fertile plant to run up the new trellis. From what I know about how rampant kiwi fruit plants are, it should compete more than adequately with the old red table grape vine that is also to be trained across the trellis (rather than 20m up the catalpa tree, which is useless).

You can tell this is a kiwi fruit plant - the stems are
covered in brown fur just like the fruits. 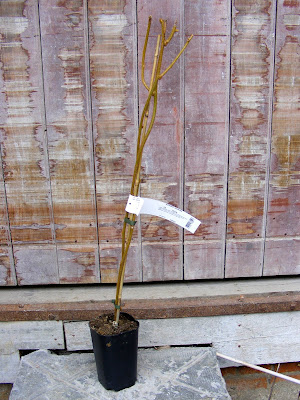 Unknown in France 30 years ago, today the kiwi fruit is a winter favourite in a season when not much good local fruit is available. From May to the end of the year, they are imported from the southern hemisphere, then the European crop takes over. A variety called Adour, grown in les Landes since the 1960s is registered as Label Rouge. 'Red Label' produce is high quality, organic and must be produced along strict traditional methods within a designated area.

Kiwi fruit will continue to ripen after they are harvested, and can be kept in the fridge in a pierced box for up to 4 weeks. For the best flavour, take them out of the fridge and put them in the fruit bowl a few days before you want to eat them. They have few calories (47 kcal/100g) and a single fruit supplies your daily Vitamin C requirement.

In French, the skin is described as duveteuse ('downy', pronounced 'doov-terz'). This protective layer means that they require very little in the way of chemical treatments to grow or for storage, even when not produced organically. Also, the skin protects the flesh from the oxygen in the air and stops the destruction of the Vitamin C in the flesh after harvest.

Kiwi fruit contains an enzyme, actinidine, which breaks up proteins. It makes an excellent ingredient in a marinade for pork, or can be slipped inside a chicken to make the meat more moist. The fruit themselves don't survive cooking very well and are better eaten raw. They can be puréed to make a coulis, but it's better to do this in a hand operated food mill rather than in an electric food processor, because if the seeds get crushed they are a little bitter.

PS Kiwi Fruit - just think of them as Claudia Schiffer in a brown cardigan...
Posted by Susan at 09:00