I wear (or rather should wear) reading glasses. They are only a recent thing for me, my first pair having been bought at the beginning of 2009. I didn't want to have to try get used to bi-focals, but neither my nose nor my arms long enough for me to be able to continue just using one pair of glasses.

To be honest, I do find having two pairs of glasses a bit of a bind (as, I imagine, does anyone) but towards the end of last year I started to persevere with them and was getting better at remembering to use them. I didn't bother having them on a string around my neck because whatever I was doing they would dangle in the way, so if I though I was going to be using them they were put in a shirt pocket. Until the beginning of February, when they suddenly disappeared. We turned the house upside down looking for them, before deciding that they had probably worked their way into the recycling bag with some "pub" (advertising) and we had seen the last of them.

On Saturday, Susan was getting some wood in, and lo and behold! 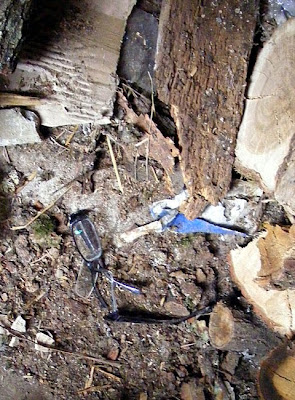 They had obviously fallen out of my shirt pocket and been well and truly trampled into the dust and dirt on the garage floor. 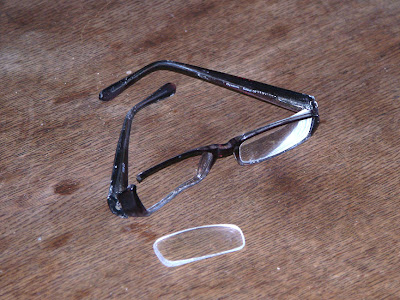 Not that they will work very well. I hope I can go to the local optometrists and get a frame that will fit the (luckily) still intact lenses. The current frames are really cheap ones from Tescos, so getting a fit may be difficult. It could be cheaper to fly to London and buy another set of Tescos frames than buy here (which really is just plain wrong).

On Another note: Our internet connect has been a bit weird that past day or so. I could get a Google search page and results of a search, but only about half of the pages would load - the computer would just sit there with a blank screen. Likewise, I could get our blog to show, but not Ken or Walt's. The Guardian newspaper would load, but Yahoo Mail wouldn't go past letting me put my password in. Statcounter, likewise, would load the front page really quickly, but Firefox would hang up when I tried to look at my stats.

This is also just plain wrong. And Frustrating.

I just hope this loads and I haven't lost this typing!

Since I wrote that last paragraph (about our internet connection) I have had a play (a long, frustrating play) with our computer and fixed it.

The problem seems to be an update to AVG antivirus that caused conflicts with the firewall. I have since deleted AVG (temporarily leaving me with no antivirus) but my internet does now work. Question is, do I want the internet with no checking of viruses, or do I want virus checker and no internet, and no chance of catching a virus anyway.
Simon
Posted by Simon at 09:00

The internet issues explain why I saw that you had a new post, but I couldn't get to it, only the old posts.

Simon, you should try varifocals. Like all things they get a bad press from the minority of people who don't like them but there are millions of others like me who find them ideal. Generally speaking, glasses come to less harm if they are on your nose all the time !

I'm with Jean regarding the varifocals. I got mine in 2007 and it took me about two weeks to get used to them. Now I realize just how pratical they are. You really should consider getting some.

P.S. I had no trouble opening and reading your posts.

I agree with Jean and Martine. Varifocals (we call them progressives, and I'm sure they must be the same thing) are great. It really is easier just to keep your specs on your nose all the time. Walt won't, and he is forever looking for his. Ah, the vanities of youth.

Haven't noticed any internet or blog weirdnesses here in S-A.

Oh, I also meant to say that I haven't used an anti-virus program in years. I did get a virus once, but that was 4 or 5 years ago. I think anti-virus software is a scam.

I will probably be sorry for saying all that because noxious and vicious viruses will now feel free to attack my computer. I think I'll turn it off and go to America for a couple of weeks. ;^)

I'm too grumpy to take 2 weeks to get used to anything :) Besides, I had to drive from Paris to Preuilly the day I picked up my last set of lenses. That would have been inetresting for the other people in the car.