The trout fishing season here opened at 6:35 (i.e. sunrise) just over two weeks ago. There are 15 000 card carrying anglers in the département of Indre et Loire, as well as holiday makers, day anglers and those who just buy a weekly licence.

Although the Touraine isn't particularly known for its trout streams, traditionally, the opening of the trout season opens the angling season, so it is a much anticipated moment. In fact, the area is crisscrossed by a good many small watercourses which shelter populations of wild trout, which both reproduce naturally, as well as being augmented by fishery stock. In order to take the pressure off the wild population the Fédération de Pêche d'Indre-et-Loire releases 1500 kg of trout into the category 2 rivers.

These two were bought from the fishmonger at the market,
so I imagine they are farmed, not wild. 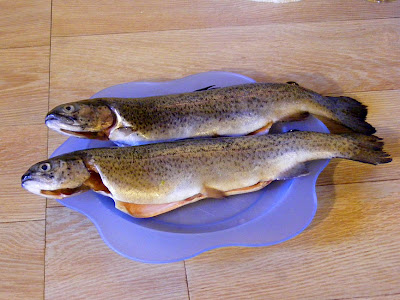 Fishing licences (cartes de pêche) can be bought in tackle shops and post offices, and from this year, you can buy your licence online. You need to supply a photo for the licence, and they are valid for the département only. To fish further afield you need to get an additional stamp on your licence. Rivers and lakes are categorised into Category 1 (those fast flowing rivers where trout and salmon thrive) and Category 2 (slower, warmer waters where coarse fish dominate). Landowners do not necessarily own the fishing rights to lakes and rivers on their property. Many of the best trout fishing rights are owned by local angling clubs (e.g. along the Aigronne), so in addition to having a fishing licence, you must also join an angling club. Fortunately, almost all the clubs have reciprocal agreements with each other, so joining one club means you can fish almost anywhere (certainly in Indre-et-Loire, and up and down the Loire Valley as a whole). Your licence will come with a leaflet that explains where you can fish.

In category 1 rivers anglers are only allowed to fish on the weekend, Wednesdays and public holidays until 2 May. After that they are allowed to fish every day until 19 September. Category 2 rivers are open every day right from the beginning of the season. Anglers are allowed to take trout measuring at least 25cm long, and the catch is limited to 6 fish. Fishing after dark is not permitted.

Of the rivers near us where you might catch a trout, the Aigronne, which flows through le Grand Pressigny, is a category 1 river. The Brignon (Betz-le-Château, Neuilly-le-Brignon) and the Echandon (Tauxigny) are category 2 rivers. Anglers can also fish for trout, if they have a licence, on plans d'eau which are stocked in March and April.

Note that I am not an angler and have never purchased a fishing licence in France. I cribbed most of this information from the local newspaper.
Posted by Susan at 09:00

Susan and Simon - we are back in Paris now and getting on with being tourists and once again on-line to blog.
We would like to thank you for your kind hospitality, a lunch and a ride in Celestine, how good was that.
Leon and Sue

L&S was great meeting you, and Célestine enjoyed it too.

So now I know all the ins and outs of stream fishing in Franch. Me and my pole are on the next flight out.

Useful information Susan...
Sandy, a word of warning, we are on the Aigronne. Until last year [when we had the fosses installed] our sewage discharged straight into the river. Given the fact that in France things tend not to get changed unless they are made to happen, I am certain that there are still many outlets like ours that for years to come will discharge into the rivers hereabouts [and probably everywhere else in France] from little houses that are not yet part of the 'system'. Personally, I'd feel happier eating the 'farmed' trout from the market.
But you can still have the fun of trying to catch them.