Last night we had our friends and neighbours Sylvie and Pierre-Yves over for dinner. I am writing this before they arrived, so I can't actually report on the proceedings, but I can tell you what the menu is.

I am making snacks to go with a pre-dinner glass of sparkling rosé from the Simoneau vineyard near Saint-Georges-sur-Cher. We are having some of our homegrown hazelnuts and walnuts, lightly toasted in the oven, and slices of hardboiled egg on crackers, dressed with Swedish caviar paste or aioli. Then there will be crême de choufleur au bleu (cream of cauliflower soup with blue cheese - in this case bleu d'Auvergne), followed by roast leg of lamb with Cumberland sauce, and steamed potatoes and peas and accompagnied by a 2003 cabernet franc from Chinon. Dessert is Persian Love Cake, served with a dollop of homemade cherry topping.

Pavé de Betz, purchased from the laitière (dairy producer)
who calls at the house. 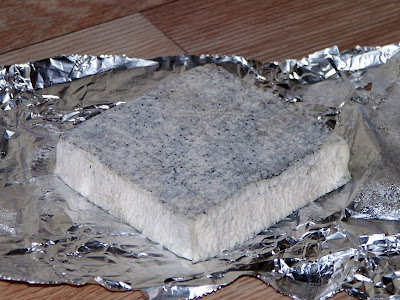 The cheese course, in between the lamb and the dessert, is pavé de Betz, from Betz le Château, (the town name is pronounced by some locals as "Be'l'château") only a few kilometres away. Pavé de Betz is so called because it is the size and shape of a small paving tile, or paver. It is a soft goat cheese, with quite an assertive flavour. How creamy it is depends on the season, and it takes 1.4 litres of milk to make a 170g cheese.

Susan, that sounds like a wonderful dinner to me. The Persian love cake sounds very intriguing - can you tell us more please ?

And you have found yet another cheese that we MUST try. I love 'assertive' cheeses. I feel a visit to Betz le Château coming on during our next visit at Easter !!

"It is a soft goat cheese, with quite an assertive flavour."

And undoubtedly not made with pasteurized milk. Unfortunately, it is quite difficult to get REAL goat cheese over here in the Stytes.

Susan, thanks for that pronunciation. I went to my Larousse Dictionnaire de la Prononciation, and in it I found a town in the Oise, just north of Paris, called Betz and pronounced [BEH]. I also found a place called Bazoches-sur-Betz near Montargis about which Wikipedia says: La prononciation gâtinaise de Bazoches-sur-le-Betz escamote le « tz » final : Bazoches-sur-le-Bé. As far as I'm concerned, the local pronunciation is the best one. But the city of Metz is called [MESS], so who would know without local knowledge?

And the menu sounded fantastic. I hope the dinner was a big success.

What Ken didn't say is that last year, on our way back from Chenonceau, we stooped at a winery where a man was selling Pavé de Betz. I bought one or two. That cheese is very good and the taste is different from that of Selles or Valençay.

What a mouthwatering menu indeed. To eat in courses...how refined.

Jean: Persian Love Cake is almond meal based, no flour. It's delish and very simple. I'll give you the recipe next time you visit.

Berowne: Yes, I assume it is unpasterized - that would be usual for here.

Ken: Ah, interesting. So to pronounce Betz as 'Beh' is actually the norm in French.

Jenny: I originally trained in the catering industry, so it just seems normal to me.