It was warm yesterday!

Monday was quite a pleasant day - the weather was good enough that I could wash Célestine without suffering frostbite. Tuesday was good too - even warm enough to do some painting. But yesterday, by comparison with what we had last week, was a scorcher.

We started the day by going to Loches. We decided we were going to buy a picnic bench from Mr Bricolage, and seeing as Mr Bricolage is next to a LeClerc Supermarket that has an optician, we would call in and see if we could do something about my reading glasses. Being Wednesday, it was also an opportunity to have a wander around the marché, which is one of our favorites.

The lady at leClerc's opticians was really helpful, and found me some frames that my old lenses could be cut down to fit into. Even more pleasingly they were in the "second pair free" category, and although not fee to me (I wasn't buying a first pair) they were very cheap. We arranged to return at 18h to collect the frames with lenses fitted.

After lunch, we drove to the verger/potager so Susan could plant her early potatoes (Amandine) and some raspberries (Zeva) while I put the picnic bench together. It's a bit of a monster, weighs a tonne, but should seat 6 (or even maybe 8) people comfortably. We had some trouble fitting the table in the car, so I offered to donate Susan to the man at Mr. Bricolage because it looked like I wouldn't be able to fit her in as well. (This was done in French and made enough sense to him that he could respond that I would regret it. Not my first attempt at French humour, but definitely my first attempt in French at bloke humour.) 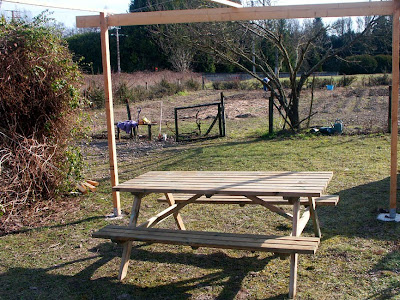 When we got back in the car at 4.30pm the thermometer read 21°C. We both knew it was hot as we had been working in jeans and t-shirts, which is really nice after being all rugged up for so long, but 21°? Positively tropical, and over 20 degrees warmer than 10 days ago. If the temperature keeps increasing at that rate, August will be "interestingly" warm.

We then drove back to Loches to pick up my new glasses, and called in to a new fruit and vege shop in Perusson to have a browse. We were both impressed with the quality of the produce, and the prices are about the same as supermarkets. What a pity we will be eating home grown only in future (touch wood).

Wasn't Wednesday just beautiful? I wouldn't call 21º hot, but pleasant fits the bill. I don't get to "hot" until we hit 30º.

It was hot where I was. But then it usually is :¬)

I can outdo that. Tonight isn't getting below 21. Looking forward to some cool actually.
One of my friends an Aussie chef who worked in Paris a decade ago asked if I would drop a pressie in to friends at Loche, well 10 min out at St Senoch.
They have a goat farm and sell the cheese at the Loche market on Wed and Sat. Are you familiar with Jean Pierre and Piette Moreau? Like asking if you know someone in Sydney when living in Melbourne.
Leon

Do you know anything about the nice cheese shop in Perrusson? Maybe on your next trip to Loches (when you attempt to trade Susan for a picnic basket) you could check it out and let us all know if it's worth a stop.

Susan, good luck with the vegetable garden this year. What new things will you be trying?

Leon: We don't know the Moreau personally, but I think it is likely we have bought their cheese at the market. Not for a long while though, as we have our own goat cheese producer in Preuilly who I buy from regularly. If you have a problem delivering the parcel, leave it with us and we will drop it off. It is always good to meet local producers.

Carolyn: I don't know the shop you mean, but we will look for it and check it out. There is an excellent cheese stall at Loches market though which sells a wide variety.

I will be growing everything this year! So far I have sown peas, mangetout, aubergine, tomatoes, peppers and early potatoes. I'm going to try growing salsify - I think that's the one thing I've never eaten that I will be trying.